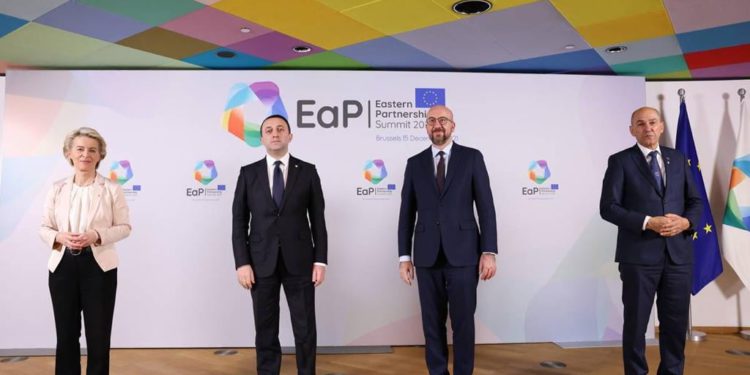 The government administration reports that the Head of Government, in his speech at the summit, reaffirmed the steadfastness of Georgia’s European aspirations and European choice, also speaking about the Associated Trio and describing this format as a clear demonstration of one of the partnership’s key principles of differentiation. The Prime Minister expressed hope that the cooperation between the Trio and the EU will grow even deeper to help fully tap into the opportunities offered under the Association Agreement.

PM Garibashvili, in his speech at the summit, focused on the region’s security challenges and emphasized the need of the EU’s enhanced engagement in conflict-resolution, including toward the full implementation of the August 12, 2008 Ceasefire Agreement mediated by the EU. 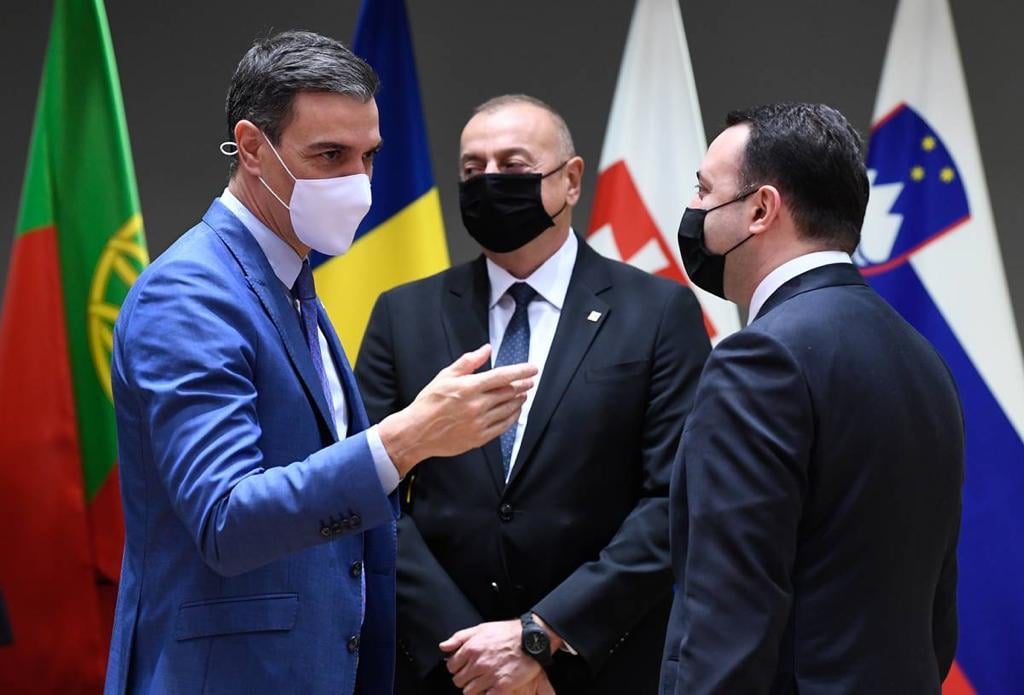 At the summit, the EU Reiterated the strategic importance of the Eastern Partnership and the European choice and aspirations of the Associated Partners, also pointing out that the sovereign right of partner countries to define the depth of their relations and the quality of cooperation with EU.

The summit welcomed the effort of the so-called Associated Trio (Georgia, Moldova, and Ukraine) toward deeper cooperation with the EU, seeking to put in place close coordination with one another in this process, including for the implementation of the Association Agreement and intensification of cooperation under the Eastern Partnership. 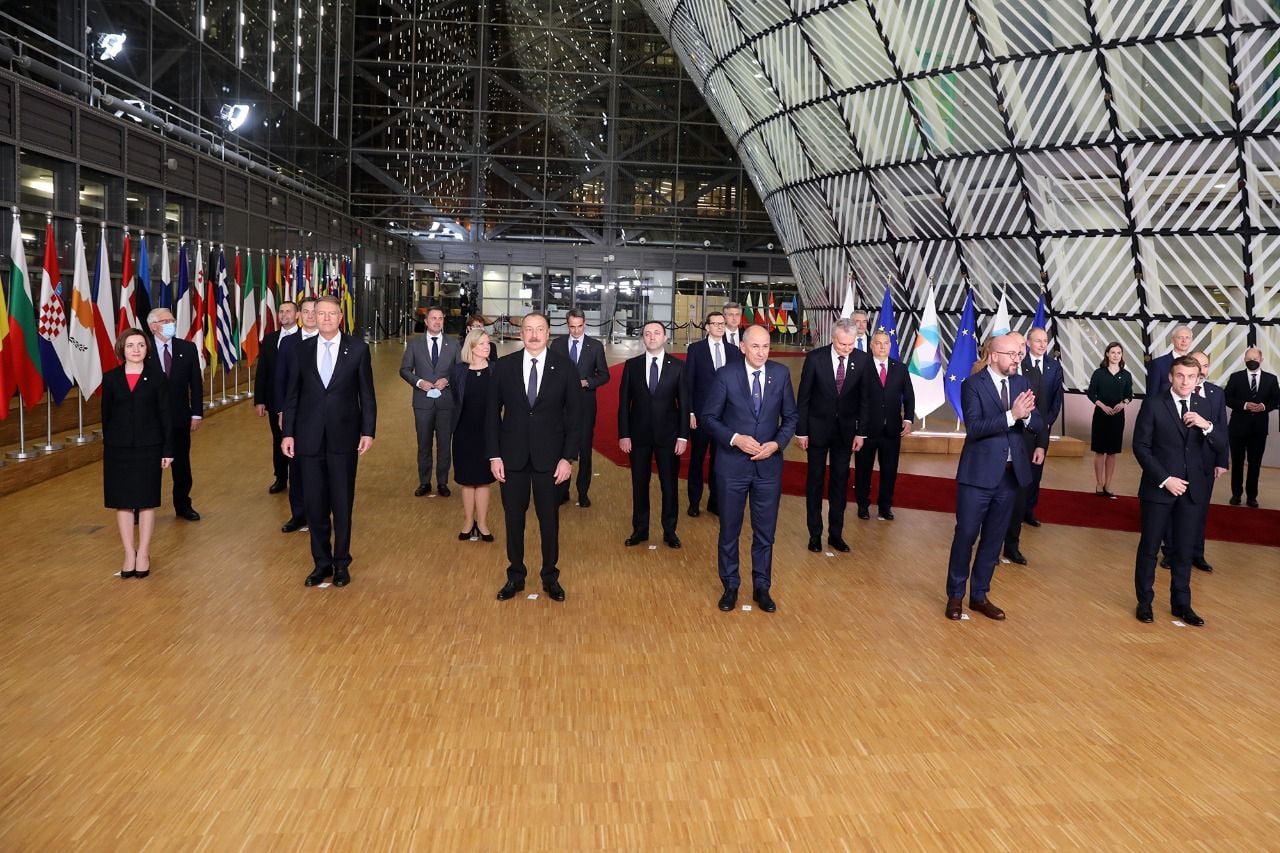 The leaders reiterated firm support for partner countries’ sovereignty and territorial integrity within their internationally recognized borders. Special attention was paid to the region’s security situation, emphasizing that blatant violations of international law undermine peace in Europe. In this context, the need to renew efforts toward regulating regional conflicts was emphasized, something also implying the EU’s enhanced engagement.

The summit’s participants expressed support for differentiation, one of the Eastern Partnership’s key principles that defines granting, on an individual basis, EU integration tools to concrete partner countries. In this context, the Associated Trio’s gradual integration into the single EU market is planned.

“At the summit, the leaders adopted a political declaration expressing full support for pressing priority issues within the scope of the Eastern Partnership. The new agenda of the Eastern Partnership, as part of the declaration, was developed through Georgia’s active involvement together with the EU and other partners. Consequently, an ambitious agenda has been set to promote the empowerment of the partner countries’ security, economy, institutions, and environmental and digital transformation mechanisms. The new Eastern Partnership agenda, besides maximally strengthening general resilience tools for the Eastern Partnership member states, also involves reaching important short- and medium-term objectives, to be ensured through the new EU External Investment Plan with a volume of 2.3 billion euro (with the potential to attract 17 billion euro in investments). For Georgia, this means stronger transport, energy, and digital connectivity, including through maximally tapping into the Black Sea’s potential. Other important projects will be implemented as well to bring tangible results to citizens, including accession to the single euro payments area, reduced roaming fees between the region’s countries and with the EU, support for SMEs, including startups, fostering the mobility of students and the academic community, enhanced access to the European Solidarity Corps, Erasmus +, and Horizon Europe programs, and others,” reports the government administration press office.

As part of his visit to Brussels and participation in the Summit, the Georgian PM yesterday met with Charles Michel, President of the European Council.

During the face-to-face meeting, the parties discussed all important issues on the agenda of Georgia-EU relations, also the importance of voicing strong messages and reflecting Georgia’s priority issues in the Eastern Partnership Summit’s political declaration.

The Head of Government pointed out that Georgia prizes gradual integration into the single EU market and strengthening energy and digital connectivity.

Garibashvili thanked Charles Michel for his personal effort in supporting Georgia’s path toward European integration, also adding that European integration is the choice of a vast majority of Georgia’s population, and the Georgian Government’s ambitious plan to apply officially for full EU membership in 2024 serves this very purpose.

The meeting touched on Georgia’s reforms and the importance of their continuous implementation.