Only after we saw that they wanted to take it all, of course, we decided to end the One-Party rule.

Named the long-awaited third power in the country, the party “For Georgia” is struggling to keep the balance between the two political giants. The party, founded by the former prime minister and once named “Super-minister,” Giorgi Gakharia, is under attack from both leading parties. GEORGIA TODAY interviewed Natia Mezvrishvili, the deputy chairperson of the party “For Georgia” to answer all the questions both parties and the people have been asking them for a long time.

Even though the EU criticizes the “Georgian Dream” party, do you think we will still get  membership candidate status?

We have to thank Ukraine, first of all, for this questionnaire. I know the government’s opinion is different but if not for Ukraine, if not for their fight in this war, we wouldn’t have had a chance to get this questionnaire so early. We can get the candidacy status if we all come together and if we answer those questions in the right way, and if we admit the challenges and admit the problems we have and take steps to fix those problems. We will have some problems in meeting the requirements of the chapter, which applies to the rule of law, which applies to democracy and human rights, and that’s why we have to admit those problems together. The government should not say – “You know, everything is OK, we do have an independent judiciary, we don’t have any problems in the practice in terms of protecting human rights” and so on… – That’s going to be a huge mistake.

We should avoid these anti-western sentiments and propaganda which are expected if we fail from the side of the government. From the side of some of the groups which exist in the country. They might blame, let’s say, the EU and some of the member states for not supporting Georgia’s accession to the European Union, but if we fail, that’s going to be, of course, only the fault of those who didn’t fix the problems that we have. So, in order to avoid any kind of failure, we should admit the problems and fix those problems as soon as possible.

Melia spent months in prison, Saakashvili is still there, and the one who imprisoned both, just weeks ago applied for membership in the EU. Was it worth Gakharia resigning?

Well, from this perspective, I think Gakharia made the right decision. I think it was the right decision and the only decision he could make in that situation. He was not against arresting Melia; he was against the manner in which Melia’s arrest was planned. The government could have planned it in a different way and he was planning it in a different way, to avoid damaging the country’s image, which actually happened later and we have seen it. I don’t think that the EU had any reaction, because they were quite critical of each and every backsliding of democracy. Their decision was actually reflected in the withdrawal of the 75mln Euro macro-financial assistance. Once again, if the question is whether this is the end of the story – It’s not! This is just the beginning, and the decision of the EU will depend on the responses from the country. If we will continue to have a politically motivated justice system. If we will continue to have problems in the judiciary and so many questions with respect to the independence of the justice system; if we will continue to violate the human rights and not investigate those violations properly, as we had the example back in 2021, July 5th events and many, many other developments; if we continue to undermine the principles of the rule of law, which the government is doing on the daily basis, of course, the response of the EU is not going to be favorable for the country. So, we should all consider this.

Your party didn’t support the UNM to create a committee for Saakashvili’s case. Who’s going to help you if one day Gakharia needs a committee?

In that context, when the UNM actually raised that particular initiative, we considered it to be politically motivated because his case was investigated by an independent state agency, the State Inspectors Service. Nobody had any questions with respect to the impartiality of that particular state institution. They needed the place in the parliament to use it, first of all, as a reason to enter parliament and second, to talk about Saakashvili 24/7, which was also in the interests of GD. We do have a political prisoner right now- Gela Abuladze, we had another political prisoner Akaki Bartaia, who was just recently released. We didn’t ask for the creation of a committee for Bartaia’s case, because we don’t think that the parliament should be used as a platform for discussion of individual criminal cases, even though there is a political motivation in that particular case.

Then what’s the purpose of the parliament, if you don’t use it for politically motivated cases? 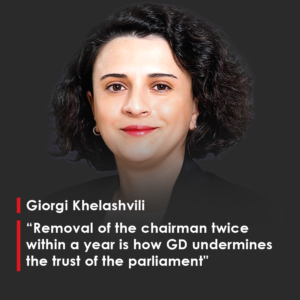 Even though we are a parliamentary republic, unfortunately, parliament doesn’t fulfill its functions and, I think, mainly, that’s the fault of Georgian Dream and the UNM, because it has become like a battlefield between those political parties. There is no substance-based discussion in parliament, even though we try, and, on the other hand, there is no respect towards the institution of the parliament, because on a daily basis  “Georgian Dream” tries to undermine trust in parliament, and by undermining I mean the removal of the chairman, twice within a year, reason unknown. So, such kinds of decisions which are made by GD, of course, undermine  trust and damage its reputation.

In the city halls countrywide, you formed a coalition with the party that your leader Gakharia once called “the party of rabbits”- the United National Movement. Why should the people trust you again?

This is not a coalition. UNM simply didn’t have any other choice, because if they had continued to boycott the process, they knew we would all end up in re-elections and new elections in those municipalities, of course, wouldn’t be in the interests of the UNM. The only party that can benefit from this is “Georgian Dream”. We are not fighting for the chairmanship. We offered the chairmanship to both GD and UNM. We said, “OK, let’s keep the balance. You’re going to be the chairperson of City Hall; I’ll take the deputy chairperson’s position. Also, let’s fairly divide the commissions within the city council, under the umbrella of the city councils,” but, unfortunately, both refused to take those offers, because they both wanted to take everything. So UNM, simply didn’t want to see any representatives of GD in any position, and GD didn’t want to see any representatives of the UNM. Only after we saw that they wanted to take it all, of course, we decided to use all the legal tools according to the legislation to end the One-Party rule. That’s why “Georgian Dream” is so mad about our party “For Georgia”. We managed to end their One-Party rule on the municipal level. And when I say that the UNM simply didn’t have any other choice, that’s what I mean.

Does your party plan to visit Ukraine, or should we await your preconditions, just like the ruling party did?

Setting any kind of preconditions is just unacceptable to a country that is at war. Simply put, it is immoral, and that’s what GD is doing. Yes, we do plan to visit Ukraine, we already expressed our position with other opposition members and I hope this visit will be carried out very soon. Frankly, when we are speaking to our international partners, when Gakharia is meeting partners, he is trying and we all are trying to persuade everybody to support Georgia. We are trying to persuade each and every partner not to listen to the damaging statements of the government and to keep Georgia in the same boat with Ukraine and Moldova. This is how a responsible party should act in the national interests of the country.