Joint Statement by 3 Former GD MPs: We Must Equip Society with the Truth 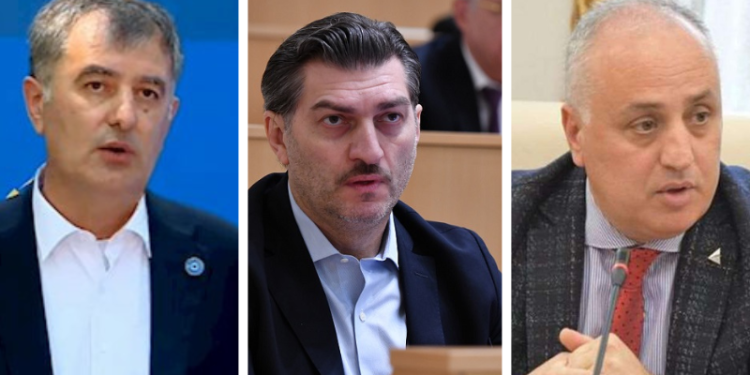 The text posted on the parliament’s website states that their goal is to “equip the public with the truth”, for which they left the party, as they recognize that “speaking publicly on certain topics on their part will cause inconvenience to the ruling team.”

In particular, the deputies make claims about the opposition’s planning of a revolutionary scenario, and say that this is why they were so focused on the issue of EU candidate status.

“We have been holding a discussion with the party leaders and the Parliamentary Majority over the last few days concerning the ongoing political developments.

“Our estimations on the processes fully coincide with the positions of our team leaders and members, however, we encountered dissent on the volume of information that should be delivered to society. Naturally, we understand our colleagues urging us to hold back on the flow of information released about the political processes, however, this is the moment our society should be better informed about the backstage of our politics. It is the fate not of any authority or party but of the country and the nation that is at stake.

“It is time to entrust the defense of the country to the people. There are the forces wanting to trigger revolution in Georgia, change the government elected by the people, or replace authority with persons directly responsible for numerous crimes committed in 2004-2012. It was the objective of the meeting of the National Movement and its media and NGOs in Bakuriani and the engagement of a famous American revolution specialist, Peter Akerman, as well as the introduction of the issue of the EU candidate status. It is crystal clear that the candidacy for Ukraine today is absolutely irrelevant.

“The Russian military aggression put Ukraine on fire and destruction, claiming thousands of citizens on a daily basis, and the status of ‘candidate’ cannot serve as even a consolation for Ukraine in this period. The same for Moldova – a country bordering the conflict zone, sheltering thousands of Ukrainian refugees and experiencing the gravest economic problems. The only reason they granted candidacy to these two countries is to aggravate the political background for the Georgian Government and artificially trigger the spark for revolution. The candidacy served as a “mousetrap” issue for the Georgian Government.

“President Zurabishvili was the first trapped, hosted in Brussels and saturated with this narrative. According to the initial calculations, Mme. Zurabishvili was assigned to make the first statement about the EU membership application in the Parliament. In this view, she even suggested the Parliamentary session breached the Constitution. However, our team was prompt in its response and resisted this scenario. Then the National Movement and its satellites came forward on stage and started a campaign on the Application, after which, the Government made the decision on the Application in a rational manner. The participants of the Bakuriani meeting were in advance informed and it was not a puzzle at all that Ukraine and Moldova would receive the candidacy and Georgia not, and these expectations appeared to be true. The EU decision and further developments fully coincided with the forecasts. The participants of the Bakuriani meeting stepped up and demanded the resignation of the government. The Revolution Committee of the National Movement focusses on two terms: de-oligarchization and de-polarization.

“Let us remind you that these two terms have been recorded in the Resolution of the European Parliament and were reflected in the Opinion of the European Commission. These terms have a simple interpretation: de-oligarchization means the expelling of Bidzina Ivanishvili from Georgia, and de-polarization – the release of Saakashvili and Gvaramia from their imprisonment. They developed two alternative scenarios for the revolution: a short and long-term. The short-term scenario depended on the Resolution of the European Parliament. This Resolution and the statements of the MEPs were the gravest insults to the Georgian Government, which was purposed to create an emotional background among the population. However, this scenario did not work and the first attempt failed. The second scenario depended on the EU decision on candidacy. By refusing candidacy to Georgia, they still managed to create an emotional background, which according to their calculations, will be followed by the imposition of so-called reforms with the only goal to change the Government and appropriate the Georgian Court. As one of the MEPs, Michael Gahler, urged, the parties should prepare for a new political agreement, which means yet another attempt to make us deviate from the Constitutional framework and sign a political agreement, on the basis of which two criminals will be released and Bidzina Ivanishvili will depart. It will entail Constitutional disorder and the loss of our statehood, which cannot and shall not be done. It is inadmissible to start the negotiations with these people refusing to recognize the state, authority, or any state institution. M. Gahler also chose to state that if Ivanishvili was a patriot, he should leave the country.

“This statement reveals their true aspiration: patriots of the country shall be put aside and authority granted to the traitors, thus abandoning the country. The traitors are needed since they will accept every task assigned to them and even start a war, which is the main objective of this scenario. It was the reason that Zelensky and Arakhamia were considered revolutionary characters, which was also a part of the scenario of Akerman. The fact is that they need Georgia for the war, believing the Georgian people to be cannon fodder. They well understand that neither Irakli Garibashvili will sacrifice the country and people to war, nor Bidzina Ivanishvili. That’s why, they need the people in authority who will find no moral impediments in putting the country to destruction, and such people can be found in the National Movement and their NGOs and media. We witnessed Moldova, right upon receiving candidacy, making a statement about the sanctions on Russia. As it seems, it was a condition put on Moldova preliminarily and thus, sacrificed this country to at least gravest economic problems.

“When 300 MEPs signed the absurd Resolution, it gave us a clear picture. Georgia will not receive the candidacy even after six months if we are not engaged in the war or impose sanctions on Russia, which is a direct way to war. The unprecedented six-month term was invented with the goal of maintaining turmoil in society. If Ukraine and Moldova, as Viola von Cramon and the Foreign Minister of Latvia state, were admitted to the 30-year waiting room, then we were not to maintain their long-term revolutionary scenario. We want everything to have a real name and, in this view, we intend to gradually inform society about the developments happening in the backstage of Georgian politics. Naturally, we intend to hold back certain parts of information. We strive to prevent a scenario that leads Georgia to disorder, war and Russian military occupation. Our country will not survive a new war. And hence, we shall demonstrate high responsibility to our country and people.

“Besides, the main goal we chase is to prevent the enforcement of the plan aiming at the creation of artificial impediments on our EU integration path. If we fail to equip society with the truth, it will become a part of the disorder and war scenario, which will forever close the door to our EU integration. We shall provide society with the truth to make them a guarantor of our European future.

“We understand that disclosure of certain issues will inconvenience our team and, thus, we have to leave our positions in the party and faction and act independently. Despite our resignation, we remain supporters of the Georgian Dream and intend to render our assistance to the team in promoting the country and providing prosperity,” reads the statement.