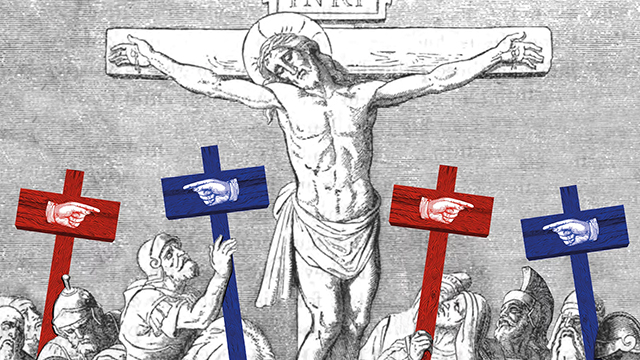 O Come, All Ye Faithful! This is a popular Christmas hymn based on the biblical story of the birth of Christ. It alludes to the shepherds rushing to Bethlehem to worship their infant redeemer. The hymn underlines the necessity of our coming together in adoration, and celebrates our unity in the devoted blessing of Christ, who gave up his own life for our salvation. Isn’t this an amazing beginning for the most elevated faith in God?! If slightly interpreted and made easier to perceive, this means that any human life is worth living, in the belief that it was granted to us magnanimously by the Son of God. Not that we truly deserve it with our lofty faith in Him and the way we behave, just because He chose to die to let us live. Simple, isn’t it? Well, not really.

Look at what the Christians are doing in the land called Ukraine. Being morbidly obsessed with some unlikely political aims and foul earthly ambitions for the sake of upholding their short-lived ideals and aspirations, they are killing each other. Many prior wars have had the same filthy content, but this time it is happening in the nuclear era of flabbergasting electronic and supersonic achievements, when the human chance of survival has achieved its acme. And it clearly means that we Christians are poised to kill not only one another, but the goose that lays the golden eggs for all of us on our forgiving and beautiful Earth.

Compared to the peoples of other beliefs, demography among Christians is both dire and hopeless. We are dwindling away, assisted by man-made deaths. And the world is looking at this fratricidal confrontation as if nothing much is happening. The impotence of the Christian world is unbelievable, not to mention the absence of the relevantly commensurate-with-the-problem desire and qualification to stop the mutual extermination of fellow Christians in the generally peaceful world because of some idiotic geopolitical blunders and misunderstandings.

This is not another pacifistic flicker of an aging journalist who no longer has much to talk about in the colorless days of his dotage. No! This is a cold-minded but hot-blooded, long-maturing and internally tempered analytical piece on a painfully specific theme: the slaughter of Christians by the hands of Christians in a war made by Christians. I just wonder what the believers of other faiths think of us. Do they think we are savages, having nothing to do any longer with ‘O Come, All Ye Faithful’? Could they be contemplating us as a species that has never walked in close vicinity to civilization? I just wonder if tens of thousands of young lives fit and ready to procreate the Christian progeny is worth disappearing from the surface of the Earth so as to guarantee the safety of one nation. And what safety are we talking about? Where is the safety? Not even one human life is worth the fight for that phony safety.

Can anybody in the world say how many lives of any faith will be sent to the next world before this despicable military adventure comes to a logical end? You know what? A worldwide military call-up might be a good idea, to put together, say, a hundred-million-strong peacemaking force who will go to Ukraine without even a slingshot in their hands, to scream at the maximum pitch for a stop tothe sinister military action, to rescue the Christian gene pool from inevitable annihilation. Why am I talking so ardently about Christian lives? Because it is a war between the Christian believers of two brotherly nations, who are so close to each other in blood and history that there can’t be a stronger sin before God and His Son than this. What is, after all, more important? To have lives intact, or to murder each other in search of safety for those lives? The absurdity of this is reaching a point where we are losing face in an attempt to save face from losing. This would sound comic if it were not tragic, so Adeste Fideles!