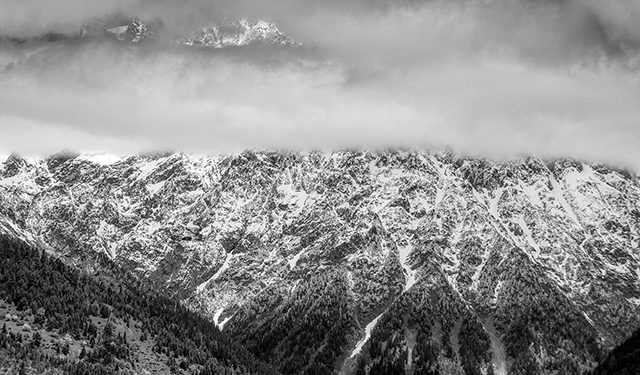 Well, not infinite, this being a natural phenomenon and not a purely mathematical one; but too many to count with any ease, if at all.

My wife and I were recently in Mestia on various odd jobs, enjoying the new freedom afforded by our next vehicle, four months after losing the last one in the garage fire of January. This car comes all by donations from very kind friends across the world, and we are extremely grateful.

Once I had dropped Lali off to start what she needed to do, I was free for some time to scout out new photos in and around the town. I took off towards Ushguli on the main road, from which soon after exiting Mestia are offered views of Ushba… if the Mountain is playing.

What I got was a single few seconds’ glance at Ushba’s south peak, nothing more. But the opening in the swirling clouds spiraled straight to that point, and gave me a view I had never seen before, so I took the shot, abstract and minimal as it was.

Despite it being mid-May, there had been new snow on the heights of much of Upper Svaneti. The “wall” beside Ushba was no exception, most prettily picked out in just a thin veil of white, with all its complete verticals free of snow. So the effect was strikingly high-contrast. With spring coming through below and winter dominating above, I took several photos, intending to reduce it all to black and white as is my current habit with most of my work, concentrating on the form and lighting instead of hues. Later, in other locations, I got some new angles on watchtower groupings from locations I’d not visited before, and called it a day photo-wise.

It has been happening rather often of late that only upon editing my work do I find something new and startling which had not been obvious when I took the photo. That day was in this vein. That snow-sprinkled mountain wall, up close in detail, now revealed something new.

It may be my own tendency to start seeing faces everywhere in these mountains, after the first such sighting last year. This has led to a “feedback loop” in which photos and writing inspire each other, and prompt me to write stories about what these faces and figures are for, in Svaneti, set in the distant past. I seem to be writing new things, not retelling existing legends, although the things I am seeing are visible to everyone, sometimes named by them and given some minimal backstory.

My thesis is becoming this: that Svaneti has an uncountable horde of images of beings which might live as short a life as the change in a cloud pattern, or as long as geology itself, or anywhere in between these extremes. Some appear benevolent, others malevolent, some perhaps quite inscrutable. The longer-lived ones, especially, impress themselves on eyes and minds which are both fortunate and receptive enough to notice them. This might sometimes be a conscious noticing, but it might also sometimes be an unconscious one. From this very impressing emerged the original “pagan” or animistic religion of the Svans, its origins lost in ancient history but its existence not giving way to Orthodox Christianity in anything more than a formal sense, the two coexisting side by side somewhat in mutual animosity.

Below is a link to a full-size copy of my recent photo of the wall I have described above. I leave it to you, reader, to see what I see, or not. Zoom in and explore, and you might just find that, while looking, you are also being observed BACK.
https://tinyurl.com/FacesSvaneti