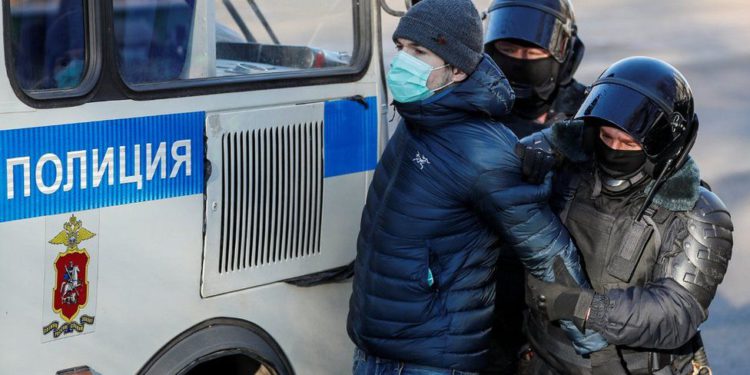 More than 100 people have been arrested early on Tuesday in front of the Moscow City Court, where the trial of Russian opposition leader and well-known Putin critic Alexei Navalny is being held, reports the local media.

A Moscow court is to decide shortly whether to turn the Russian dissident’s suspended sentence into an actual prison term.

“Navalny has been accused of breaking probation rules which required him to report regularly to Russian police over the embezzlement charge. His lawyers say it is absurd he is accused of breaching probation, as the authorities knew he was recovering in Berlin after a nerve agent attack that nearly killed him,” reports the BBC.

He is already serving a 30-day sentence in connection with that case, which he denounces as politically motivated and calls the embezzlement charge fabricated.

The anti-Putin campaigner could face up to two and a half years in prison.

It was also reported that the judge hearing Navalny’s case has been replaced.

The streets surrounding the court area are blocked and security is tightened.

“Navalny accuses Putin of running an administration riddled with corruption, and recently released a YouTube video featuring an opulent Black Sea palace which, he alleged, was a Russian billionaires’ gift to the president.

“On Saturday Arkady Rotenberg, a billionaire businessman close to Putin, said he owned the palace and had bought it two years ago,” reads the BBC article.

Earlier on Sunday, police detained more than 4,000 people across Russia during mass demonstrations, with protesters demanding the release of jailed Kremlin critic.