Russia, Belarus and the Debate on Empire 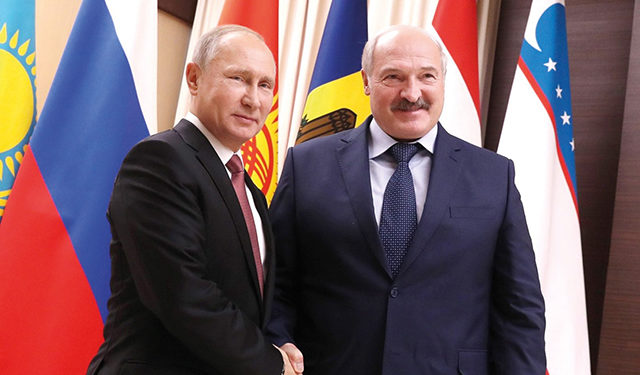 Prior to each and every meeting between the Belarussian and Russian presidents, rumors about potential progress on a union state project and likely Russia military presence in Belarus abound. Source: ridl.io

Belarus is becoming increasingly isolated from the world, pushing itself more into Russia’s embrace, and Moscow is using this opportunity to cement Belarus as a buffer state against Western geopolitical influence. Still, contrary to the established analyses, unless there is a real change of a pro-Western government installed in Minsk, Russia is unlikely to push for a radical scenario or an integrationist agenda.

After the forced grounding of a Ryanair plane in Minsk, an event the EU leaders called a “hijacking”, Belarus-West ties further deteriorated following months of an already tense atmosphere between the two. The West is thus likely to pursue a harsher line against Minsk, which is bound to have geopolitical repercussions for Belarus-Russia ties.

All conditions are now ripe for Russia to make major moves on the Belarussian front. Moscow could draw Minsk close by providing various economic concessions, and by pushing to establish a military presence on Belarus soil. After all, Lukashenko has been isolated, circumstances which are unlikely to change while he is in power. This pushes him to seek Moscow’s political and economic support and makes him doubly vulnerable to the Russian leadership’s exertions.

Yet, surprisingly, Moscow has been quite inactive in its ties with Minsk over the past year, when the crisis in Belarus erupted following the widely believed rigged presidential elections. Prior to each and every meeting between the Belarussian and Russian presidents, rumors about potential progress on a union state project and likely Russia military presence in Belarus abound, but no meaningful results follow. For instance, Lukashenko’s statement in April, as he was about to visit Putin, that “one of my principal decisions for a quarter of a century of presidency” would be made, caused a flurry of speculation on an inevitable Belarus-Russia merger. In the end, no such grand announcements were made.

Lukashenko’s role should not be diminished behind these delays. Though geopolitically vulnerable, he has proved his mettle as a tough negotiator. At no point in his career, when pressured by foreign actors and internal troubles, has he positioned himself as a weak side.

Of course, there is no guarantee that the announcement of a union state, a project which dates back to the 1990s, might not take place at any future Belarus-Russia talks. But here, perhaps, beyond Lukashenko’s negotiating prowess, it would be wise to reconsider some basic aspects of our traditional understanding of Russia’s strategy in Belarus. The established analytical consensus holds that Moscow is using troubles in the neighboring country to pursue a deeper military cooperation and institutional integration. This strand of thinking should be revised. This is not to say that Russia is no longer interested in Belarus or that its interest has subsided. For Russia, Belarus will continue to play the role of an important buffer state against the West, whether it is the EU’s economic push eastward or NATO’s military expansion. The idea of Slavic brotherhood too serves as a strong bond for some within Russia’s political elites. But the push for integration with Belarus is much more than the above arguments: It will mark a definitive break in the model of Russia’s ties with its immediate neighbors, and specifically those which are members of the Moscow-led Eurasian Economic Union (EEU). More so, the union state will also indicate a return to what many Russians fear: the official empire.

True, over the past three decades Russia has annexed and invaded territories, has consistently tried to influence Belarus, Ukraine, the South Caucasus, and Central Asia, but it still resembled a much more liberal empire than what it was back in Soviet times, with the extending of direct political control over the non-Russia territories having been generally avoided. Crimea being an exception, of course, though here too the annexation became possible not only because of Russia’s military bases, but the peninsula’s large Russian population. In other words, for the Russian political elite, the annexation did not seem like taking foreign territories or the building of an official empire.

Contrary to what many think in the West, the Russian political elites have not clearly decided in favor of a formal empire. In fact, as the country moves towards a post-Putin period, the integrationist vision of Belarus and its neighbors will likely subside. Again, this does not mean that Moscow will dissolve the EEU or will reconsider its ties with smaller neighbors.

Pursuit of political and economic integration with Belarus would also mean what many Russians fear: spending money on a neighbor whose industrial and economic base might not bring as much advantage as one could hope for. In fact, expenditure could far outweigh the benefits. For Moscow, Belarus is not Ukraine, and its economic weight is not worth an outright and immediate merger. Furthermore, though serving as an effective buffer zone, Russian security and military elites also understand, albeit silently, that NATO expansion does not constitute as much a threat as often portrayed by the Kremlin.

Nevertheless, Moscow will continue building closer ties with Minsk. It will closely monitor the latter’s deteriorating ties with the West. It will use those divisions to promote further some of its vital interests in Belarus. But it is also clear Moscow will remain hesitant to make a definite move. Perhaps the likeliest scenario, when Russia could directly project its military power and engage in the integrationist project, is if a popular revolution prevails in Belarus and an openly pro-Western or reformist-minded government comes to power.

Negotiations on sensitive issues (creating a single currency, a unified tax codex, etc.) will continue, but likely in the same vein as in previous years. Sensational breakthroughs are unlikely, as Lukashenko will remain unwilling to concede while Moscow is undecided as to whether it should follow a hard “imperial” option. Perhaps for the time being, a hybrid option of slowly increasing economic and political influence in Belarus will continue, as in previous years. Much will depend on popular discontent inside the country. Should pre-revolutionary conditions emerge, Moscow’s response might evolve from a hybrid to a military or more altogether integrationist one.