Illegal Presidential Elections in the Tskhinvali Region: Why Bibilov Lost and What to Anticipate in Future 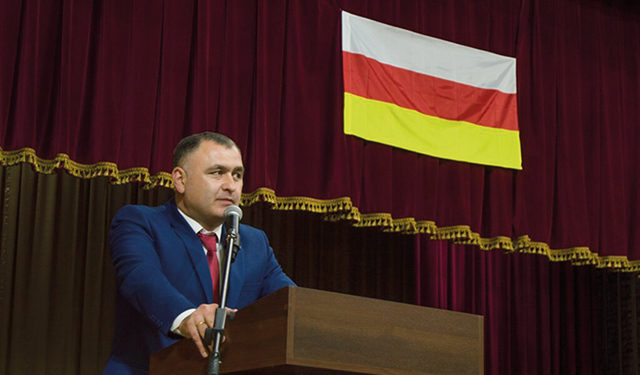 At the beginning of May, the 6th illegitimate presidential elections were held in the Tskhinvali region since the end of the Georgian-Ossetian conflict. The incumbent President, Anatoly Bibilov, lost to Alan Gagloyev in the second round of the elections. In the de facto republic, most presidents are unable to run for a second term.

Developments before 2022
The first de facto presidential elections in the Tskhinvali region were held in 1996, with Ludwig Chibirov winning. In 2001, despite having Moscow’s support, Mr. Chibirov lost to Eduard Kokoity, a businessman who had recently returned from Russia. Until now, Kokoity is the only president to manage to win a second term: He received 98.1% of the vote in 2006.

The next elections were held in 2011-2012 amid a political crisis. Anatoly Bibilov lost, despite Moscow’s support (he personally met with the Russian President, Dmitry Medvedev, before the elections), after which a political crisis broke out in the de facto republic, leading to re-elections. Leonid Tibilov won in that runoff election, one in which Bibilov was no longer participating. In the 2017 elections, Bibilov beat Tibilov. Tibilov also met with the Russian President, Vladimir Putin, before the elections; however, a crucial role in determining the fate of the elections was played by Putin’s influential aide, Vladislav Surkov, who is said to have lobbied for Bibilov’s candidacy.

The 2022 Elections
The Pre-Election Campaign
Bibilov took the lead from the start and, using legal leverage, prevented several powerful rivals from registering as “presidential” candidates. Among them were the former de facto defence minister, Ibragim Gassiev, and an opposition member of the de facto parliament, Davit Sanakoev. Bibilov’s main rivals were Alan Gagloyev, the leader of the Nykhaz Party; Gary Muldarov, an MP; Alexander Pliev, the Vice-Speaker of the de facto parliament; and Dimitri Tassoev, a former MP.

In the run-up to the election, the opponents did not intimidate each other during televised debates, during which their criticism often turned into insults. Bibilov’s election campaign was also assisted by Russian political technologists. Gagloyev’s brother, who is accused of triple murder, has been the subject of numerous videos, for which relatives of the deceased were also recorded in Dagestan. For its part, Gagloyev’s team also freely turned to “black PR.”

Bibilov made a referendum on joining Russia the main message of his election campaign to succeed. He tried to portray Gagloyev as an anti-Russian candidate who believed that the referendum issue was not in Russia’s interests at this stage, and that it only served Bibilov’s election goals.

Bibilov personally went to Donbas to gain Moscow’s support, and facilitated the dispatch of ethnic Ossetian contractors and volunteers employed at the Russian 4th military base to Ukraine to participate in the Russian military aggression there. The issue soon turned negative on Bibilov, as a number of the military servicemen withdrew from the war, openly criticizing the attitude towards them, which had manifested in difficult conditions in conducting the war, the fact they were given damaged military equipment to use, and the incompetence of the Russian military commanders.

In the first round, Gagloyev also succeeded in the occupied Akhalgori municipality which is populated by ethnic Georgians. He promised them he would open the so-called border with the rest of Georgia.

Crossing points connecting the Tskhinvali region and the rest of Georgia have been closed since September 2019, after a Georgian police checkpoint was set up near the village of Chorchana. Bibilov temporarily opened the crossing point at Easter, April 21-25, in hopes of gaining the support of local ethnic Georgian voters himself.

The Second Round
The second round of elections was first scheduled for April 28 but, due to complaints from three “citizens” of the so-called South Ossetia, the date of the second round was set for May 8. The postponement of the date was presumably ordered by Bibilov, who needed some time to mobilize supporters for a decisive battle. For his part, Gagloyev also used this time to rally support from the other opposition candidates.

Why did Bibilov Lose?
Jabiev’s case is the black spot of Bibilov’s presidency. In August 2020, Inal Jabiev, who was arrested for attempting to assassinate the de facto Interior Minister of the Tskhinvali region, Igor Naniyev, died as a result of violence by law enforcement officials. Jabiev’s death was followed by a long protest from the local population. Bibilov was even forced to oust the government, but refused to release the Prosecutor General, Uruzmag Jagaev. In protest, opposition members of the de facto parliament refused to attend sessions.

Bibilov’s reputation was also damaged by the so-called Chorchana-Tsnelisi crisis, which was caused by the deployment of a Georgian police checkpoint near the occupation line. He was accused of inaction. In addition, Bibilov was accused of conceding 200 square kilometers of “Ossetian” land to Georgia.

Bibilov was often accused of corruption and cigarette smuggling. According to his opponents, the funds allocated by Russia were not spent properly.

Who is Alan Gagloyev?
Gagloyev was born in 1981 in Tskhinvali. In 2002, he graduated from the Faculty of Economics and Law of the “South Ossetian State University.” In 2003, he took advanced training courses in Vladikavkaz within the framework of the Presidential Training Program of the Russian Federation. He worked for the Ministry of Economic Development of the de facto republic in 2002, although much of his career has been connected with the State Security Committee, where he worked from 2004 to 2017. His biographical records indicate that he also participated in the 2008 Russia-Georgia war. In 2017, he participated in the illegitimate presidential elections but without success, and in 2020, he became the leader of the parliamentary opposition party Nykhas.

What Challenges Will Gagloyev Face?
Gagloyev will have to solve a number of problems. At the initial stage, the main political challenge will be the formation of a “government” where the interests of all his supporters must be protected. He was supported by all the opposition candidates and therefore they now expect that their assistance will be properly appreciated. In addition, public expectations are quite high. Dissatisfaction with Bibilov was so great that Gagloyev was even supported by voters with different political sympathies. Consequently, after the defeat of Bibilov, their claims will be directed towards Gagloyev.

Gagloyev’s main problem will be overcoming the economic challenge. While the Russian military aggression continues in Ukraine, funding for the Tskhinvali region is being reduced, the Russian Ministry of Economy announced. Against the background of the fact that the incomes of the region are practically dependent on Russia and there are no resources to locally increase incomes, solving the economic problems of the population will be Gagloyev’s main headache. A prolonged war in Ukraine will deepen the crisis in Russia, which will exacerbate Gagloyev’s political and economic challenges.

About the Referendum
Despite his defeat, Bibilov said that a referendum on the unification of “South Ossetia” with Russia will be held. He claims that all the necessary documents have already been collected and handed over to the Central Election Commission. However, this issue was part of Bibilov’s pre-election campaign and may lose its relevance under Gagloyev’s rule, as the issue of the referendum is not a priority for Russia at this stage either. Leonid Kalashnikov, a member of the State Duma and Chairman of the ‘Committee on CIS Affairs, Eurasian Integration and Relations with Compatriots,’ said that Gagloyev was in no hurry to hold the referendum. This issue depends more on Moscow, on how ready Russia and Belarus are to expand the Allied State.

What Will Change for Russia?
Although Andrey Turchak, the Secretary General of the ruling United Russia Party, came to Tskhinvali to support Bibilov in the run-up to the election, Kremlin officials overseeing the direction of the Tskhinvali region did not have a clear favourite. Dmitry Kozak, the Deputy Head of the Administration of the President of Russia, responsible for the occupied regions of Georgia, met with both candidates after the first round. Russian state media also interviewed both.

The Russian Deputy Foreign Minister, Andrey Rudenko, who oversees the post-Soviet space and the occupied regions of Georgia, said that “after Gagloyev’s victory in the presidential election, Russia hopes to preserve the legacy of relations with South Ossetia.” He added: “We expect everything to be fine.”

A delegation of the Council of the Russian Federation also positively assessed the election process. According to the Head of the delegation, the Senator Sergey Tsekov, Russian senators did not observe any violations. According to Vladimir Jabarov, a member of the Federation Council and the First Deputy Chairman of the Foreign Affairs Committee, the change of leadership will not affect relations between Tskhinvali and Moscow, as both candidates are pro-Russian.

Various ruling groups in Russia may have had their own candidate in the elections, but in the end, Gagloyev’s figure will not have any radical impact on relations with Russia. The vast majority of Ossetian politicians are pro-Russian.

What Will Change for Georgia?
The Ministry of Foreign Affairs of Georgia condemned the so-called presidential elections in the occupied Tskhinvali region held by Russia. “Such illegal actions violate the fundamental principles and norms of international law and grossly violate Georgia’s sovereignty and territorial integrity within its internationally recognized borders,” it said.

Russia’s military-political influence over the Tskhinvali region is so high that it is unlikely that anything will radically change in Georgian-Ossetian relations in the short term. The current format of bilateral relations is likely to be maintained – the Incident Prevention and Response Mechanism (Ergneti meetings) and the fate of the Geneva International Discussions will depend on relations between the West and Russia. The only tangible issue that Gagloyev can solve in the first stage of his career is the opening of the so-called crossing points, which will be a relief for the ethnic Georgian population living in the occupied region. As for the long-term perspective (the perspective after the end of the war in Ukraine), the dynamics of Georgian-Ossetian relations will be decisively affected by the outcome of the war in Ukraine and the degree of Russian military-political or economic influence over the occupied regions of Georgia.