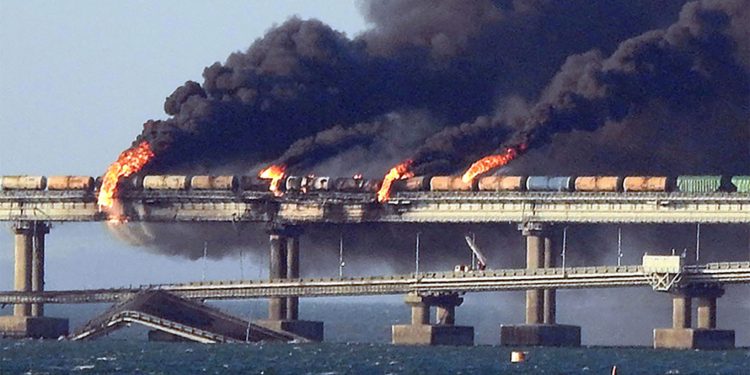 Eight people have been detained over the weekend’s attack on the Crimea bridge, and Russia’s security forces have named a senior figure from Ukraine as being behind them, according to reports from the state-owned Tass news agency.

It quotes a statement from the Federal Security Service (FSB) saying:

“The Federal Security Service, together with the Investigative Committee, established that the organiser of the terrorist attack on the Crimean Bridge was the Main Intelligence Directorate of the Ukrainian Defence Ministry, its head Kyrylo Budanov, employees and agents.

“Currently, five citizens of Russia, three citizens of Ukraine and Armenia, who participated in the preparation of the crime, have been detained within the framework of the criminal case.”

The FSB claims that the explosives which caused a section of the bridge to collapse were sent from Odessa through Bulgaria, Georgia and Armenia. Tass reports that the cargo carrying the explosives was being sent to a non-existent company in Crimea, which Russia annexed in 2014.

“Ukraine’s Operational Command ‘South’ reported that they completed over 300 fire missions, targeting and damaging two Russian Gvozdika self-propelled howitzers and an APC,” the Kyiv Independent said in a tweet.

The leaders of the G7 on Tuesday condemned Russia’s most recent missile attacks on cities across Ukraine “in the strongest possible terms” and vowed to stand “firmly” with Kyiv “for as long as it takes”.

Roughly 30% of Ukraine’s energy infrastructure has been hit by Russia since Monday, officials said. As millions in Ukraine are facing blackouts due to the attacks, the government has urged civilians to cut their electricity use and not use domestic appliances such as ovens and washing machines.