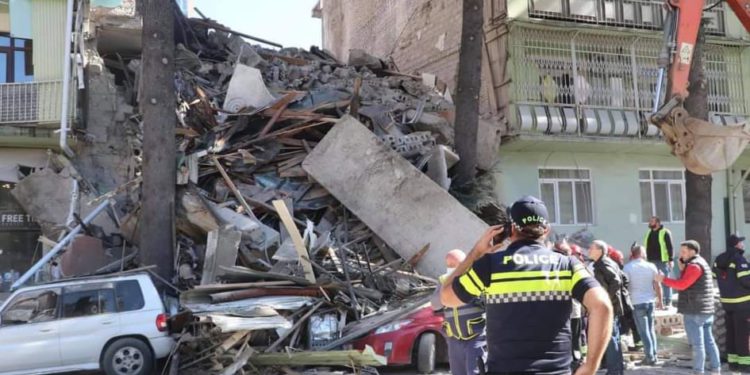 One of the juveniles injured in the collapse of a building in Batumi is currently being examined at the Iashvili Central Mothers and Children Hospital in Batumi.

Reportedly, in addition to various injuries, the juvenile also has a lower limb injury.

Part of a 5-storey block of flats collapsed on 26 May Street in Batumi, the capital of the Adjara region, injuring several people, including minors. Rescuers saved two minors from the ruins, including one newborn.

Based on the available information, two people in the ruins of a building in Batumi managed to contact the rescue brigade.

Currently, rescuers are trying to pull them out of the ruins.

The search for other people trapped in the ruins continues.

The Ministry of Internal Affairs says an investigation has been launched into the incident.

“As soon as the notification on the collapse of the residential building located on 26 May Street in Batumi was received at the Ministry of Internal Affairs, rescue and police forces were mobilized at the site, as well as ambulance crews.

“At the moment, the area is being cleared of rubble and active search and rescue operations are underway. The Ministry of Internal Affairs has launched an investigation on the fact of building collapse; the information regarding the number of injured persons is being clarified at the moment.

“Along with firefighters, special equipment has already been mobilized at the site, including aerial ladder fire truck. In addition, the staff of the Special Tasks Department of the Ministry of Internal Affairs and the Forensic-Criminalistics Department have also been mobilized. The additional live force is being deployed from the neighboring regions of Adjara as well.