Prof. Sergey Radchenko on the War, the Repercussions, and What Lies ahead for Russia and Georgia 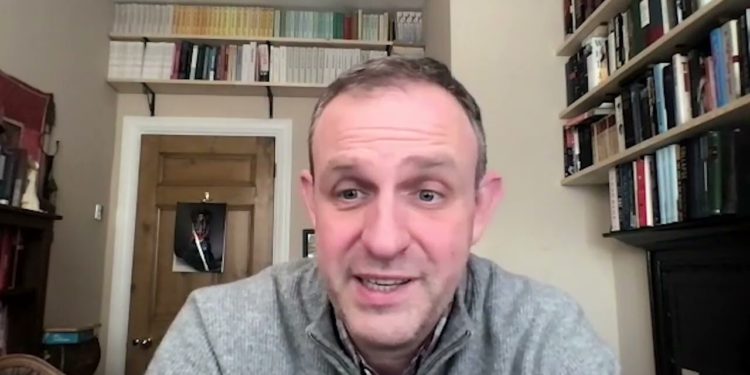 “If you look at the people who are representing Russia, they are clowns and nationalists. These are not serious negotiators,” Professor Sergey Radchenko told Radio Free Europe’s Georgian service, as Ukrainian and Russian delegations sat down for the first round of talks. Radchenko, a cold war scholar, teaches at the John Hopkins University and is, as he himself put it, “vehemently opposed” to the war Putin has waged on Ukraine.

“I’m not entirely Russian. I’m like many Russians – I have extensive family links to Ukraine. It came as a huge shock. It feels like almost a part of you died when this happened. So it has been a very dramatic few days for me personally,” Radchenko says. “Obviously, it’s a tragic situation. It’s a situation that I think very few people predicted among the policy community in Moscow. Everybody thought it would be utterly irrational for Russia to invade Ukraine, because of the high risks of economic sanctions, being cut off from the West, etc. So for all those reasons, people just could not believe until the last moment that this would happen. And that includes many of the liberal intelligentsia in Moscow.

“But in the end, I think most people, even most reasonable people, believed that something would be arranged and this would be averted at the last moment, because it was just too hard, psychologically, emotionally to believe it could happen.”

Your area of expertise is Cold war – have we gone back to it?
I think it is a reasonable position to take when we discuss the Cold War. The major difference is that today we have a much closer interlinkage between the Russian and Western economies. And we can see just how that has empowered the West in its policy of economic sanctions against Russia, because the moment the West finally came around to understanding the gravity of the Russian threat and acted in unison, we could see that the economic sanctions being applied have proven catastrophic for the Russian economy: the Russian stock market collapsed.

Is it not ironic that Putin and the Kremlin for decades have been using economic resources as a leverage against the West, and now it’s turned on them?

Well, yes. And Russian leadership has to recognize that Russia is not really an economic superpower. And it is hugely exposed for various reasons. But Putin is not an economist. I don’t think he fully understands the economic implications of this, or if he understands them, he may understand them at some philosophical level, but he doesn’t see the practical implications, and the practical implication is that everybody in Moscow in a position of economic authority is now pulling their hair out, and whispering, “What is this? This is crazy, the Russian economy is being torn apart.” And this is dangerous, because this creates huge instability. And it means even less room for Putin to maneuver, and then he’ll see himself as being cornered. And I think that is where the situation becomes extremely dangerous.

You say Putin gambled, and failed. How come?

I think Putin’s strategic genius has been vastly overstated. I’ve always been very skeptical of Putin’s strategic genius. He has made some interesting tactical moves, yes, but in strategic terms, Putin’s entire foreign policy, going back years and years, has been counterproductive and detrimental to Russia’s national interest. This is a position of someone who sees the future of Russia in Europe – and all of the things that Putin has done have gone against this, and they have undermined Russia; they have turned Russia into the bogeyman of Europe. And so the question then is – what’s so great about that? How’s that a great strategic goal to strive for? I think it’s been a disaster.

Being cornered makes him extremely dangerous, you say. What should we expect from this cornered animal?

I don’t think we’ve seen Putin play all his cards yet. We know that the military operation has been quite brutal so far, but it’s certainly not as brutal as could have been with a full scale Russian assault – I think this is a fraction of what we could see if we have further escalation of this conflict. It seems Putin is still hesitating, and he’s maybe looking for some kind of way out, and if he’s looking for a way out, then perhaps he should be offered some political alternatives for de-escalation, because the danger of further escalation is too great to ignore. We don’t know what’s going through his mind. But the key thing is to assume that he’s still a rational being, and that he’s not crazy, because if he’s crazy, we can’t do anything about it. If he’s a rational being, then we can at least influence him in the right direction.

How worried should the West be re: the Nuclear threat from Russia?

Russia doesn’t have a system like the United States with DEF CON. The United States has DEF CON 1,2,3,4, and 5, with DEFCON one actual nuclear war. Russia doesn’t have that. So when Putin says, you know, let’s make our nuclear forces ready, it’s unclear what he means by this. That seems more like just saber rattling in order to remind the West that it should be more accommodating and careful around Russia.

Diplomatic solutions should remain on the table…incentives, like lowering some sanctions if he stops military action, and this is going to be a difficult sell in many Western countries

What should be the West’s strategy be, considering this major shift in attitude that we have seen in the last couple of days?

Well, we should continue to look for diplomatic solutions. Always. We are not in a situation like in 1945, where he is Hitler or Hirohito and we should be calling for unconditional capitulation or else. I think, obviously, Putin has cornered himself, unleashed a military campaign, and Russia is going to pay the price, there’s no doubt that it’s already paying the price. But fundamentally, diplomatic solutions should remain on the table. We should be talking about incentives, like lowering some sanctions if he stops military action, and this is going to be a difficult sell in many Western countries, because it was extremely difficult to get Western unity on Russia in the first place. Nevertheless, I think it’s the responsible thing to do.

How many allies does Putin have left and how long are they prepared to stick with him for?

Russia has not got many allies. Obviously, it has its clients in Central Asia. Belarus is an ally for sure. But how useful are those allies? Belarus has certainly proven to be very useful – it’s an alliance of dictators. China is not a formal ally. So the big question is whether China will break ranks with Russia, and China has been sitting on the fence, they have been trying to support Russia a little bit in some ways, through a kind of benevolent neutrality. But they certainly haven’t been as obliging to Russia as Putin might have expected, given the close relationship between him and Xi Jinping. The Chinese have their own interests, they’re looking after their own interests, and those interests are not going to be the same as Russia’s.

Let me also ask you about the proverbial “other Russia.” Where are they? A handful of people out of a country of 142 million?

I don’t think the majority of the Russian people want this war. There is the liberal intelligentsia – all of them are opposed to Putin to one extent or another – from the viciously opposed like myself to moderate opposition.  There’s also a large number of people in Russia who see the whole war as a very unfortunate undertaking. There’s also a minority of Russians, a very sizable minority, maybe even half of Russians, that, unfortunately, will support this this conflict until bitter and.

If this majority that doesn’t approve keeps their head down, will history judge them as spectators for keeping silent?

It all depends on how this ends, but, yes, I think the Russian people will have to come to terms with the fact that Russia is waging an aggressive war, and there’s just no way around that, and a reckoning will come.

Coming to terms also means speaking out about it? Taking action?

In the short term, yes. We can expect more in the long term. We should expect some kind of realization that Russia is not benign, as a lot of Russians still think that Russia is a benign actor. It’s not, you know, it’s waging aggressive war.

History will remember Putin as the man who clung to power, who became increasingly autocratic and missed every opportunity to integrate Russia with Europe.

How is it going to change the Putin perception in Russia, this image of the enlightened despot or autocrat?

And finally, what’s at stake for Georgia here?

Putin sees Ukraine as part of the Russian historical space, and Georgia – less so. Georgia and its culture are strange, alien things to him. But undoubtedly, if Putin is successful in Ukraine and inflicts heavy damage on Ukraine, then it will be a signal to Georgia not to go too far in its aspirations to join NATO. And also a signal to the West that it shouldn’t invite Georgia further into the alliance.