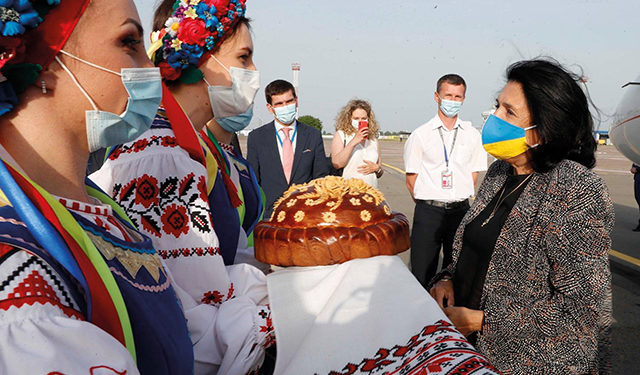 “I have always been protective of our relations and today am more so. On April 23, 2020, I expressed my concern about the issues occurring in our relations,” Zurabishvili noted. “In my parliamentary speech on April 9, 2021, I stated that I did not want to end April 9, which is the day of strengthening our independence, by not mentioning the struggle of our Ukrainian friends and expressing our solidarity. I consider it a sign of solidarity today to return the Ambassador to Kyiv immediately.’ This was followed by a formal restoration of our relations, after which there were several bilateral visits by the Prime Minister and Foreign Ministers, and today our official meeting here.

“I am very grateful for this and I believe that the presidents of both countries should take care of our relations. “Our relationship is returning to its own norm, which is based on two main principles: a centuries-old friendship between peoples, and constant, unwavering support for each other’s territorial integrity and sovereignty.” 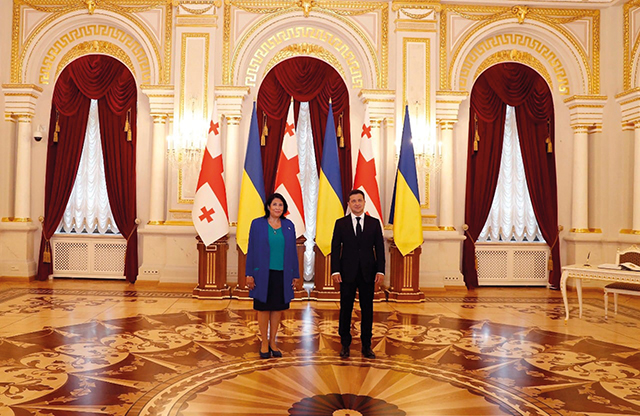 The Georgian President noted that Georgia and Ukraine are united not only by their centuries-old friendship, but also by common goals.

“We both seek the de-occupation of our countries and territories, a way to the European Union and NATO, and an increase in bilateral and regional cooperation. De-occupation is a pain, concern, and challenge for our countries. Georgia’s challenge is de-occupation and the formation of a new strategy in this regard, de-borderization, protection of human rights. I cannot but mention the conclusion of the Strasbourg Court in this regard, which is a great victory for Georgia and the restoration of relations with the citizens living in the occupied territories,” Zurabishvili said.

The President noted that after the pandemic, everyone should understand that there is no other way but stabilization, de-escalation, and dialogue.

In turn, President of Ukraine Volodymyr Zelensky noted he believes the political dialogue between Kyiv and Tbilisi is gaining new momentum.

“This first official visit is very important for strengthening the strategic partnership between our countries. Political dialogue between Kyiv and Tbilisi is gaining new momentum. Our joint task is to fill the format of strategic partnership between Ukraine and Georgia with real content, based on mutual support for specific projects and a high level of trust between us.

“Ukraine and Georgia share common goals for full membership in the European Union and NATO. I should also note the similarity of our position on the further development of the Eastern Partnership. One of the important tasks for Ukraine and our partners is to strengthen security cooperation in the Black Sea region. The Black Sea should be a safe area for free trade and navigation. We seek to strengthen the relationship between the fleets of our partner states in the Black Sea. We are actively working with Georgia and other neighbors to implement this initiative, and I hope we will see progress soon,” Zelensky said.

” Our relationship is returning to normal,” Zurabishvili added. “And this is based on two principles: the centuries-old friendship between peoples, and constant and unwavering support for each other’s territorial integrity and sovereignty.”