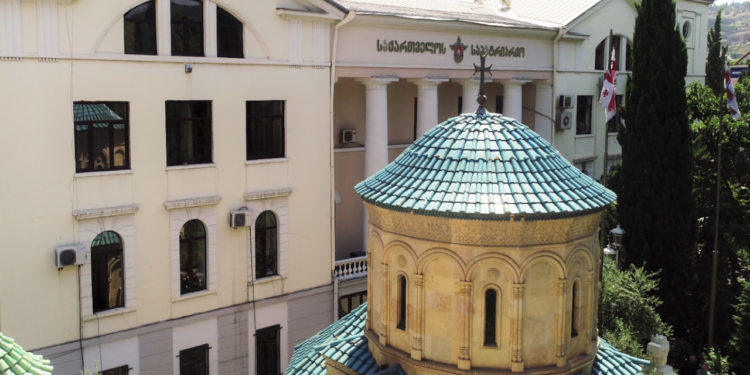 “For quite a long time now, the Church of Georgia has been under serious attack by certain forces; but after the events of July 5-6, the situation in our media space worsened and became extremely aggressive,” the Georgian Patriarchate says in a statement, where the agency covers the July 5-6 events.

The statement notes that “especially distinguished with their hate speech toward us are “Mtavari Arkhi,” “TV-Pirveli,” and “Formula,” the channels which directly and audaciously insult the Patriarchate of Georgia, the Catholicos-Patriarch, hierarchs, priests and parishioners; threats and calls for retaliation are also heard.”

The Patriarchate says that based on laws, individuals or church leaders can apply in writing to the management of TV channels and inform that they do not want to communicate with their journalists.

“Often the journalists of the mentioned TV channels, on the instructions of their leaders, we suppose, instead of being objective when covering information, make biased assessments and groundless accusations, deliberately distort the facts and try to upset the respondents with their provocative questions. Afterwards, the information they promulgate are edited and used out of context, in such a way that the viewer perceives the clergymen as violent persons.

“It is true that some misconduct took place on the part of the clergy, but a private incident is purposely generalized and focus is drawn on the violence from the side of the church ministers, which is suggested as general truth, while it is not even mentioned how many of the clergy saved the same journalists from the July 5-6 violence. At the same time, of course, they do not expose the organizers and supporters of “Tbilisi Pride,” the psychological violence they practice, the provocative statements they make and their actions.

“Journalists want to turn the temple courtyards into a place of political debate and insults, to display certain religious teachings as political statements, and to present them as a cause for creating problems. In addition, they do not shy away from accosting citizens and putting ordinary people in an awkward position by invading their private space without permission, which is their ordinary habitual manner of work.

“Grossly violating the norms of journalistic ethics, there repeatedly take place a public demonstration of psychological violence and obstruction of civil peace, which for some reason remain unnoticed by the embassies and the non-governmental sector.

“Unfortunately, some of the members of some political parties, who totally neglect their obligation to strive to normalize the processes, parallel the media with their insults directed to the Church and by creating unrest.

“We once again call on everyone to maintain composure; let us trust God and patiently overcome challenges.

“To those who want to take steps under secular law, we explain: Under the law of Georgia, every citizen is protected from physical and psychological violence, unwanted communication and harassment (Article 151I).

“Under the Criminal Code, punishable is also the obstruction of the worship or other religious rites (Article 155-e).

“Based on the above-mentioned, any individual or deans of the churches can apply in writing to the management of any of the TV channels and inform that they do not want to communicate with their television journalists because they encounter disturbing circumstances; It is also advisable to place a relevant statement at the entrance to the temple courtyard;

“If the request is not responded, the police are obligated to restrict the movement of such journalists within your area.

“May God give us the ability to persevere and the strength to pray, Amen!”, reads the statement.

Related Story: PM Garibashvili to Journalists: You are Simple Abusers