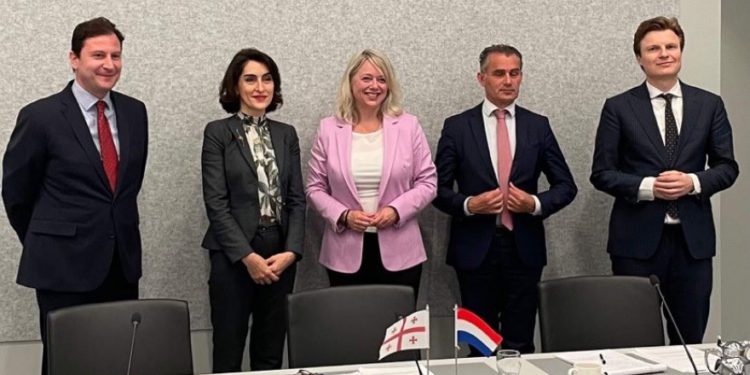 Within the visit to the Netherlands, the Chair of the EU Integration Committee, Maka Botchorishvili held meetings with the members of the Foreign Affairs Committee of the Dutch Parliament from various political groups – Agnes Mulder, Ruben Brekelmans, Tom van der Lee, Kati Piri etc.

The parties discussed the EU membership application and expectations of Georgia, the progress in the EU integration process, as well as the security challenges in the region.

Botchorishvili underlined the importance of a clear European perspective and granting the status of the EU candidate state to Georgia, Ukraine and Moldova, and support of the Netherlands and other EU member states in this regard. She stressed the security milieu in the region resulting from the Russian aggression in Ukraine, the occupation of the Georgian territories by Russia and the importance of the status of the EU candidate state for the Associated countries – Georgia, Ukraine and Moldova against this background.

The members of the Foreign Committee of the Dutch Parliament welcomed the EU aspiration of Georgia and the steps taken on this path. As unanimously noted, the Netherlands keeps supporting the European aspiration of Georgia. The Dutch MPs expressed their commitment to further enhancing the Parliamentary links.

The visit also included a meeting with the leading research centers and the media of the Netherlands. Botchorishvili dwelt on the EU integration agenda of Georgia, achieved progress and the expectations on the EU membership application.