Holy is that Holy Does 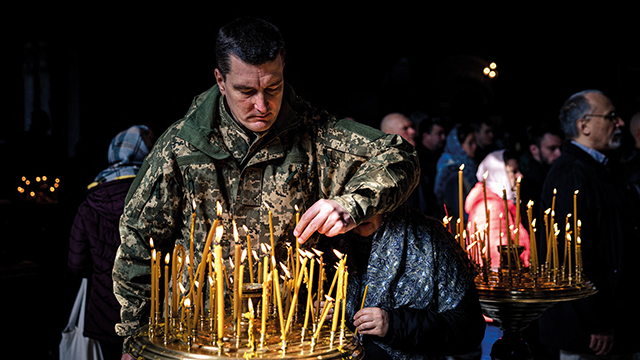 A Ukrainian soldier lights a candle during an Orthodox Easter service in St. Volodymyr's Cathedral. Source: AFP via GETTY IMAGES

Christ is indeed risen, but Easter, Hanukah, Christmas, Ramadan, Diwali, Hajj or Palm Sunday – all these great spiritual celebrations step back and lose sense with Man’s urge to fight; when Man imagines a foe out there and chooses to believe that that foe must be annihilated from the surface of the Earth, because that’s the only thing that makes sense for Him at that particular moment of militant wrath and demoralizing frenzy. This is one of the most biting pieces of everlasting human cynicism, something we have found impossible to rid ourselves of in our thousands of years of existence.

There is no respite in the so called ‘military operation’ perpetrated by Russia against Ukraine: the all-consuming fire continues to rage, jets and rockets topsy-turvy from the sky and millions of bullets hiss and whistle around, all of them meant to kill. The world, as civilized and sophisticated as it seems to be, is not capable of saving the day for the scared and tortured Ukrainians.

To the worst consternation of the fighters of the current war, unlike more than a hundred years ago, the feuding sides are not to be given a chance to rest. A famed example is December 7, 1914, when a temporary break, right in the middle of the Second World War, was suggested to celebrate Christmas, and it saw the soldiers of the warring nations declaring their own unofficial truce in the trenches. Yet, it seems the luster of this wonderful example of humane behavior has faded and lost its moralistic power.

Each provided gun and rocket, bullet and shell will target a human being: They are all somebody’s sons and daughters, brothers and sisters, husbands and wives

It is simply unbelievable that in our enlightened world, reason has no way into the thoughts and behavior of not only the confronting sides per se, but of those who are watching the 21st century savagery from a distance, sending additional lethal means to the front for creating even more effective carnage. The paradox of Man’s behavior in the handling of the Russo-Ukrainian conflict is simply inconceivable: the Ukrainians were attacked by the Russians, and it is absolutely natural and understandable too that most of the world is enthusiastically rooting for Ukraine, and wants to help it out by supplying the devastated people with both humanitarian and military aid. On the other hand, each provided gun and rocket, every bullet and shell, will target a human being on whatever side he or she is. They are all somebody’s sons and daughters, brothers and sisters, husbands and wives, and those blind, wicked projectiles – again, made by Man – cannot discern between right and wrong or good and evil.

This said, a pondering mind might also think of the remote watchers of the war who could have played a pacifying role even before it started, but alas, they did not. On the whole, neither Russia nor the West had even the faintest clue what the prolonged Russo-Ukrainian battle would turn into, as they casually ignored each other’s warnings of the incipient conflict and reciprocally suggested measures of precaution. The result: Ukraine’s might is wasted and its beauty is gone, and will remain so for a very long time to come, not to mention the thousands who have lost their lives to this shockingly inane move. And, to the bitterest chagrin of the healthier part of humanity, nobody in the world, not even the famous politicians and diplomats, have any idea if all this blaze and craze is really worth it.

Meanwhile, the Christians of the world, united in their sacred belief that Jesus was born, crucified and brought back to life, have colorfully and exultingly celebrated Easter, as if the Holiness of their behavior has remained spotless and intact in spite of the Ukrainian bloodshed. Holiness has its own measures and weight, which are now being revised, because Holy are only those who behave in a Holy way. What an appalling disappointment it is that this dreadful war between the believers in Christ did not stop even for a second, even on the day Jesus proved to all of us sinners that death was defeated to let life triumph.