Has the Eastern Partnership Plunged into Oblivion? 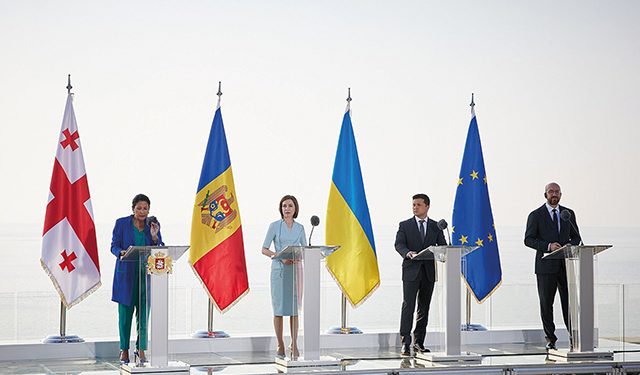 Not much has been heard lately about the famous Eastern Partnership. It is certainly alive, but is it kicking as hard as it did at the beginning of its creation? Launched 13 years ago in Prague, it has since done quite a job in terms of strengthening the stability of the eastern friends of the European Union, as well as looking to their wellbeing and rigidity. This strange and stupid Russian-Ukrainian war has certainly confused all developmental vectors, totally baffling the numerous internationally recognized decision makers, leaving us all at a loss, a worse loss even than we were faced with during the last two world wars. Then, it was at least clearly declared who friend and foe were of the concerned fifty odd countries. Right now, literally the entire world is involved in the process, and yet the action is taking place only on Ukrainian soil. A strange, strange war!

The Eastern Partnership, in the ideal geopolitical understanding, is a strategic and mutually supporting economic and political agreement between the EU and partner countries, the post-soviet states of Armenia, Azerbaijan, Belarus, Georgia, Moldova, and Ukraine. But at this point in time, the configuration of multilateral relationships within this specific dimension of international cooperation is constantly changing against the background of the ongoing war, no matter how practicable might be their common rules, interests, commitments and values. Not surprising though – the whole world order has changed unrecognizably since February 24, 2022!

One of the main objectives of the Eastern Partnership was to turn itself into a staunch supporter of various global policy objectives, such as the reaction to climate change, international security, world peace, migration, etc. This means that, via this partnership, the above-mentioned countries would acquire a promising chance to become actual international players. The recent consideration of Ukraine, Moldova and Georgia for EU membership candidacy is one of the best corroborations of this, although the former two have acquired the status, and the latter has only been promised it, and only if it behaves accordingly in the granted probation period. Georgia was frustrated and even offended to have been relegated the status of a spanked probationer, but it has at least remained a member of the Eastern Partnership, however lacking in perseverance that partnership may seem now. This is one of the reasons I ask if the Eastern Partnership has a word, if any at all, in promoting the member nations’ ambitions to acquire desirable standing in the European family of nations. Based on the information available to the public eye, one might think that it can truly do a lot to advocate the causes of its members. At least, this is what we read in its mission statement and other officially promulgated documents. Whether the Partnership can indeed do the job or not is a horse of a totally different color, although all of us watchers of the current political processes in the world make a positive judgment, based on what is written about its policy ‘being broadened, deepened and adapted to changing realities’. And there can’t be a more changing reality in the international arena than granting EU membership candidacy to a country deeply involved in a military conflict and the other on the verge of it.

The Eastern Partnership, even though its current role and endeavors are not very clear in pushing Georgia towards the Euro-Atlantic dream-world at this time, has as one of its vested goals the strengthening of tight political association and strong economic integration of this country into the European network of contemporary doings. Understandably, the process might entail significant reforms that aim to bring Georgia as a partner country closer to the EU, aligning its legislation and all other issues to the EU standards. The consequent objective is, of course, the undelayed substantial improvement of the lives of our citizenry, whose western expectations right now are bigger and hotter than ever before.