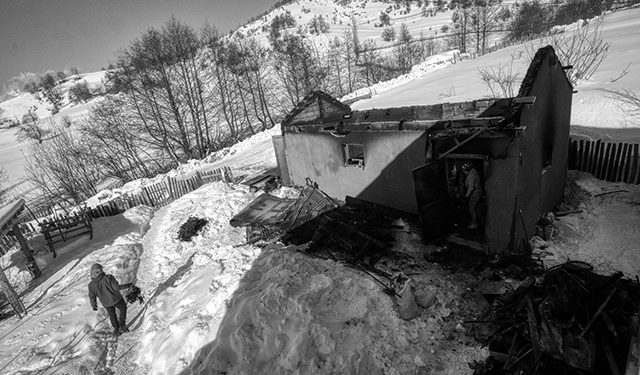 I didn’t have the heart for a witty or word-playing title for my article this time. Helluva way to start the New Year, but here we are.

We sometimes get drunk village men knocking at the door at midnight or so looking to buy cigarettes from the shop (at least we don’t sell alcohol). When we ignore them, they phone, so, as soon as the knocking starts, we switch our phones down or off. The nights of January 14 and 15 were in this vein, except that the latter added a phone call from one of the village ladies, which is unusual at this hour, so my wife answered it. “Car, fire!” was all she understood. The knocking continued, more urgently, with some shouting and whistling, not the typical style. So I put on a dressing gown and some boots and went outside.

More yells, now from further away, and I could see smoke and a glow from inside the garage. It must be a fire… I felt the steel personal door: if a door is hot, you don’t open it, because the fire on the other side is big and you’ll instantly add oxygen to feed it. The door was only warm, so I risked opening it, using the key for the padlock, which I always lock at night. Billowing smoke inside, but I couldn’t see where the fire was. Knowing that most fire deaths are from smoke inhalation, I realized I couldn’t risk going all the way to the big car doors, which only open from inside, and trying to get the 4×4 out: anything in there could explode at any time, plus all the smoke from plastics and so on was waiting for me. I shut the door again, told my seven young Christian village-volunteer guests to get their passports and get out in case the house caught, summoned a neighbor in person, and then went back into the house to gather a few valuables myself before fleeing. 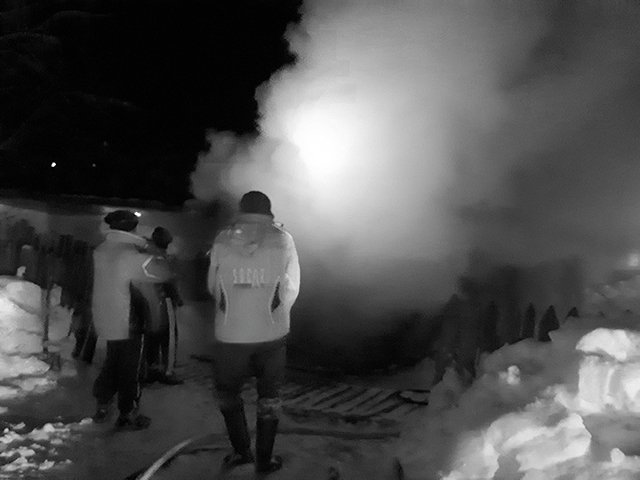 My wife had already called 112 for the fire; the guests, she and I left for the neighbors. I deposited my two small backpacks- laptop, hard drives, wallet, passports, keys -with them and returned to the scene.

By now, a few more neighbors had gathered, some with shovels to try to attack it with snow. Although the two windows were gone by now, we had to keep the two sets of doors shut to contain the fire; these doors eventually began glowing orange from the intense heat. The police came first, followed (an hour and a half after we called 112) by the fire engine from Mestia. This was able to draw water from the stream near the house, and then pump it into its hoses; it doesn’t keep its own tank full in winter, having no warm place to park and stop that water from freezing. God help anyone who has a house fire far from a water source in the 5-6 cold months… 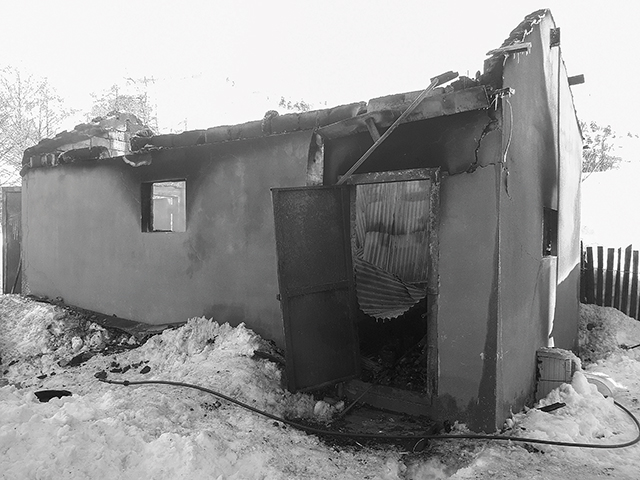 Almost all the village men gathered were drunk, and one had to be restrained from wanting to rush into the garage to try to get the car out; others responded with jeers when we told them to move farther away due to explosion risks, so we left them to it. Eventually, the roof of wood beams and corrugated galvanized steel sheets came down. The cement block walls held. The firemen continued. There were various containers of gasoline, diesel and paint, plenty of plastics, two gas bottles, and a generator and my car both with gasoline tanks, so, plenty for the conflagration to feed on. We stood in shock, watching it play out.

The police took a statement from me about possible causes, and whether I knew anyone with a grudge against me. No-one and nothing specific, I said. They and the firemen eventually left, but the latter came back twice to check on things, and my wife rebuked them as both times the fire had re-started in one area and I was trying to put it out with buckets of water. “We were freezing…” they said. As if there wasn’t a warm house waiting right here! She was right.

The guests returned, we were allowed to turn the house electricity back on, and we all turned in to attempt a few hours of sleep. 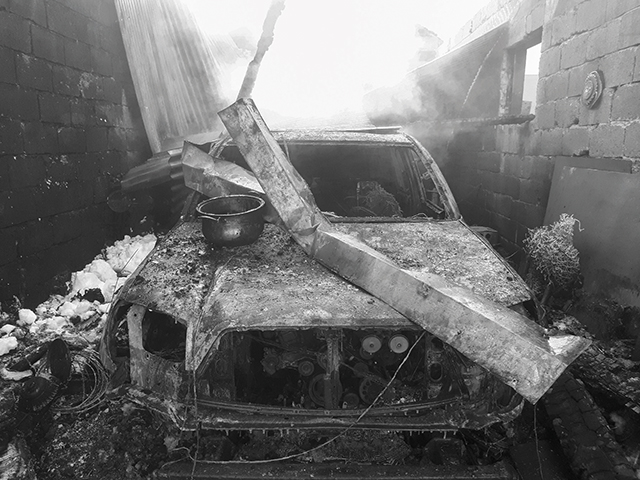 Next morning’s light showed the full extent of the blaze, still steaming and smoking a bit. The 4×4 sat, burnt right out, on its wheel disks. The inside walls were black… except the one where electricity entered, so, it seems unlikely that this was the cause, common though it generally is with these things. In the afternoon, the inspectors came up from Zugdidi to poke, prod, take photos and ask lots of questions. No, I had left not a thing running from garage electricity, except for a single radiator outside, against the wall of the house where my incoming water freezes unreachably. This radiator was on minimum power and was ruled out as a cause. Mice (who have occasionally chewed paper in the car’s glove compartment) working on electrical wires in the car? Arson? All possibilities had to be considered. 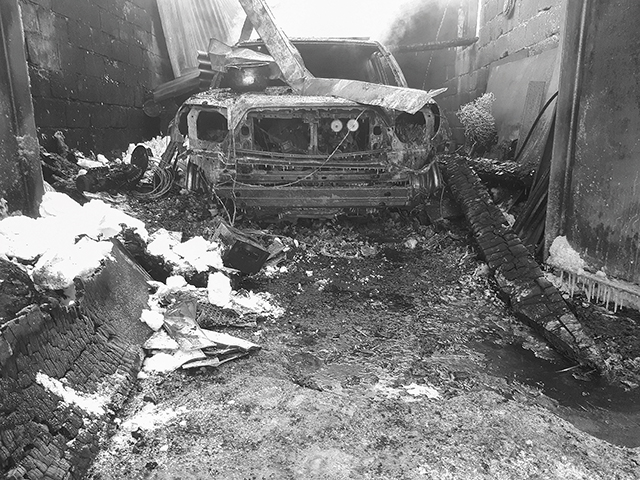 Yesterday, we were requested at Becho police station, the nearest one, some 12 km away; one kind neighbor who had already offered any help drove us there. They took our statements into the computer. But before the printer could work and we could sign the document… the power went out. The police station’s generator uses 5 GEL of fuel an hour, and they didn’t have any fuel in it at that time anyway, so we mused in the twilight about wonderful Svaneti infrastructure and its backward steps. We left, suggesting that for the signing and any further questions, the police come to us.

My team of volunteers were hugely helpful in cleaning up, bless them. This involved taking everything movable out of the garage and sorting it. Roof sheets, remaining half-burnt wood beams, salvageable tools and miscellanea, scrap metal, and garbage. All but the garbage went into the barn, and we took the garbage to the nearby dumpsters in sacks. We all got filthy, but neighbors had helped me reconnect the water (which used to enter the house through the garage) before it could freeze, so we had that, and electricity to heat it for showers. The whole experience bonded us like nothing else could.

The last urgent thing was to cover the top layer of cement blocks with weighted down plastic, to stop snow from settling on them, melting and refreezing eventually, and causing damage. That done, we are resting from our labors, punctuated by the occasional stab of remembering something else we lost in the fire. So many power tools, the workbench, and on and on. Tiny things which had survived gave some gladness: a roofing hammer, the wire baobab Christmas tree which my stepsister gave us as we were leaving her family from a Zimbabwe holiday with them some years ago. We are also so grateful that we and the house all came through it physically unscathed: this could have been SO much worse. The losses we will take care of one thing at a time. God knows.