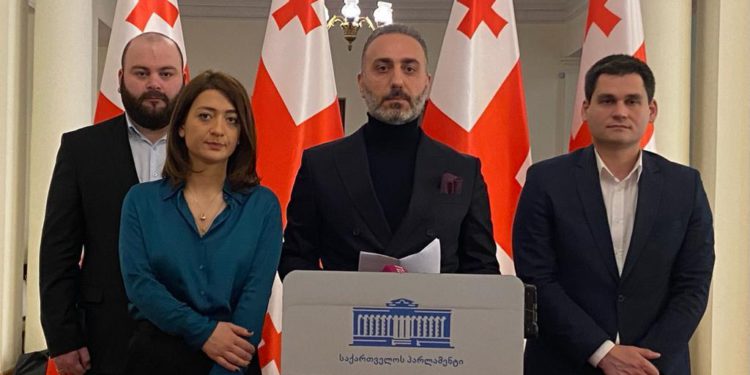 Political party „For Georgia,“ founded by ex-prime minister Giorgi Gakharia, demands the establishment of a special state institution that will ensure coordinated work of various branches of the government and civil society for Georgia’s accession to the EU.

Sharashidze underlined that the European Union reacted immediately and started the procedures for membership. Accordingly, “For Georgia” calls on the Georgian Dream and the United National Movement to put aside narrow political interests, end the policy dragging country to radicalization, and unite around the interests of security and European integration.

“Yesterday, on March 7, the Council of the European Union reviewed and sent the membership applications of Georgia, Ukraine and Moldova to the European Commission for further procedures.

“The fact that the EU has swiftly responded and initiated the procedures for the accession of our countries is crucial and welcomed. We would like to thank our international partners, the EU.

“Today, Georgia’s free future is at stake, and no one has the right to take it away from the Georgian people and our country, neither government nor opposition!

„Therefore, we call on both the Georgian Dream and the United National Movement – to put aside narrow political interests, end the policy dragging the country to radicalization and unite around the interests of security and European integration,“ said George Sharashidze.

The Party has presented a plan that the government should implement to support membership process to the European Union.

“We, the political party „For Georgia,“ address the government, which has the highest responsibility, and offer a concrete action plan:

For the record, the mentioned initiative was voiced by Giorgi Gakharia back in December 2020 and its implementation process has been launched.

Today, our team of „For Georgia,“ consisting of professionals in the field of European and Euro-Atlantic integration, including former ambassadors to relevant international institutions, expresses full readiness to support the process.

– Among others, the issue of close and effective coordination with Ukraine and Moldova is especially important;

– In addition, the plan should include the implementation of effective strategic communication to ensure public awareness and involvement; As well as issues of effective work with parliamentary groups of EU member states, groups of international experts;

The EU will formally assess applications from Ukraine, Georgia and Moldova to join the bloc. EU ambassadors discussed the three applications at a meeting on Monday afternoon before making their decision.

The Government of Georgia prepared an application for accelerated EU membership.

Ukraine, Georgia and Moldova are three of the six countries the EU classifies as neighbors under the so-called “Eastern Partnership” initiative.

But with a war now raging in Ukraine, “overnight, the EU has to change a neighborhood policy focused on incremental reform into one that is about the survival of these countries as states,” wrote Thomas de Waal, a senior fellow with the Carnegie Europe think tank.

Related Story: Papuashvili on Georgia’s EU Membership: We Expect the EU to Discuss an Accelerated Procedure