Attack of the Drones: A New Page in Warfare 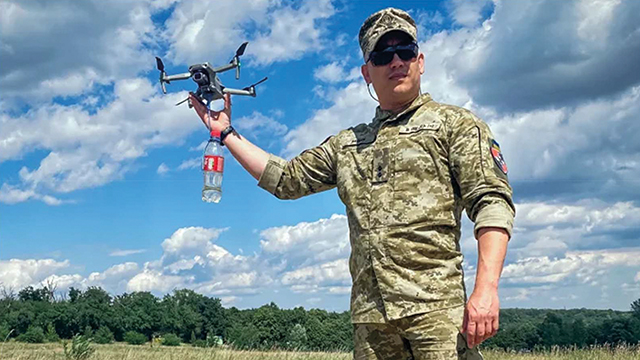 Ukrainian Lieutenant Anton Galyashinskiy holds a drone used for carrying explosives during a practice session on the outskirts of Kyiv. By Ionut Iordachescu/AFP via Getty Images

Anyone aware of the ongoing war in Ukraine has been inundated with amateur and social media footage of the fighting. From humorous footage and dances, to fierce helmet-mounted camera clips of intense combat, the public has been giving an up-close-and-personal view of Russia’s stalling “special military operation.” A unique tool commonly used by filmmakers, journalists, and hobbyists, small commercially procured drones, have been the source of much of the footage.

Either purchased by the individual soldier, donated by supporters around the world, or a part of the defense procurement system, these platforms have been used in a variety of roles by troops along the front. The simplest application of the smaller airframes is for intelligence, surveillance, and reconnaissance (ISR). While the range on small quadcopter drones is limited, the ability to get a bird’s eye view of the terrain and the enemy positions to the immediate front is a battlefield leader’s dream come true.

An extension of the ISR capability is the ability to adjust and correct artillery fire. Normally, the artillery support for advancing infantry has to be handled by a forward observer. This individual is tasked with helping the gunners, often a significant distance behind the front line, make corrections to their impacts so as to be more accurate. However, this individual is restricted to only what is in direct line of sight. With these small ISR drones, the same top-down view is afforded to the observer and the artillery crews for live feed of their attacks, making adjustments near instant.

While being an eye in the sky is incredibly advantageous, another devilishly devious application of this technology is munitions delivery. In its earliest form, soldiers created improvised claw-like devices that were able to grasp a grenade or small bomb, with the claw action being released when above the target. The live video feed watches as the explosive falls onto the unsuspecting victim down below. Newer developments have made attachments that connect to the small drone and even large drone airframes capable of carrying multiple large munitions.

While other uses have been seen in isolated cases, these examples have shown that even a small and cheap drone off the shelf can be a game-changer for warfighters. However, as with many unique developments in warfare, how these systems will be formally introduced in military formations has yet to be seen. With a wide variety in application and size, the drone will likely be dispersed across various units or cause new ones to be raised.

For smaller, mostly unarmed drones for ISR usage, the inclusion into platoon or rifle company units is more straightforward. The drones are man-portable in small pouches or bags and can be fielded by soldiers with only a few days training. With low costs and training times, the lead time for these platforms to be introduced to NATO infantry and reconnaissance units is an easy first step.

For larger armed drones, these may be additions to battalion-level assets. Drone platforms such as the Aerorozvidka R18 require more maintenance, training, and a larger crew to service them. According to the company’s website, the R18 is “a vertical takeoff and landing octocopter that has eight lifting screws and can carry several kilograms of payload.” The airframe is capable of carrying not only anti-personnel munitions, but also anti-tank.

Other drones have also made an immense presence on the battlefield. So-called “kamikaze” or “suicide” drones have been used to terrifying effect by both sides. These drones, as their nicknames suggest, detonate upon impact with their target. Guided by video terminals and launched by man or vehicles portable platforms, these require their own introduction to military units.

Because of their terminal nature, the operators need not worry about retrieving the drone upon mission completion. Drones such as the Switchblade 300 and 600, produced by American company AeroVironment, Inc., and the now infamous Sahel-136 (Geran-2 in Russia) produced by Iran Aircraft Manufacturing Industrial Company (HESA) are the most popular to consider. For smaller man-portable systems like the Switchblade 300, teams at the company or battalion can handle the task.

Larger drones such as the Switchblade 600 and Sahel-136 require more complex and larger launching platforms, making them only vehicle portable. This may pave the way for specific units, battalions or companies in size, to be tasked with the maintenance, deployment, targeting, and piloting of these systems. Just as the advent of the tank and the machine gun opened up new roles on the battlefield, so might the massive introduction of drones create new fields in military communities.

For Ukraine, Aerorozvidka drones have had immense success on the front lines. The commercially popular DJI drones, produced by Shenzhen DJI Sciences and Technologies Ltd, a state-owned technology company in China, have seen wide usage by both sides, but primarily by Russian troops. The systems have been largely abandoned after the AeroScope drone tracking platform launched.

AeroScope allows a user to view and track DJI drones in real time, causing several users in the war zone to be targeted and eliminated by artillery fire. While the software is designed for the government and police to protect secure sites, it has forced drone manufacturers like Aerorozvidka to innovate. DJI in the meantime, insisting that their drones are for civilian use only and not to be used by the military, has suspended business in both Russia and Ukraine. Despite this, alternative methods of procurement continue.

The use of drones, despite attempts to minimize their effectiveness by some, is here to stay as a new component of military doctrine. Implementing them into the military task organization and equipment framework is imperative. Building training and continuing education institutes, establishing military supply chains, and creating the necessary units should be near the top of defense officials’ list. In addition, countering these threats comes with new advantages.

From drone guns to anti-drone radar jamming software, new infrastructure comes with the technologies. Time-tested solutions, such as the barrage balloons of WWII, may provide a cheap alternative to expensive anti-air artillery and shoulder-fired missiles. Drones specifically designed to hunt down and attack other drones may even become the natural evolution of this new wave of warfare.

Witnessing this latest development in battlefield technology and the way warfighters, commanders, and engineers handle the change is continuously fascinating. As each side in Ukraine attempts to outdo the other, Georgia, NATO, and others furiously take notes. What comes of this new wave, and what it births next, will be the watchword for defense analysts, industry experts, investors, and governments for decades.