A Week of Political Meetings and Strategic Discussions with Foreign Diplomats 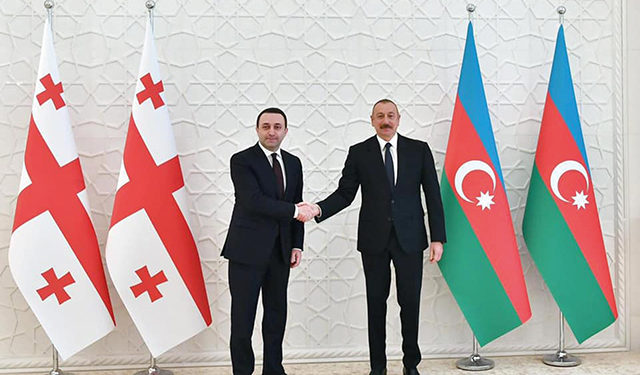 On May 5, Georgian Prime Minister Irakli Garibashvili paid an official visit to the Republic of Azerbaijan, where he met with President of Azerbaijan, Ilham Aliyev, in the Zagulba Presidential Palace in Baku.
The sides are said to have focused on the strategic partnership and friendly relations between the two countries, and to have highlighted the successful projects of regional importance implemented through joint efforts.

“Our brotherly relationship has existed for centuries,” Aliyev said. “It is a relationship characterized by dynamism and covering many areas. We have a very good history of implementing joint projects, including in the fields of energy and transport. These projects have changed the political, economic and transport situation in the region. Without strong partnerships between our countries, these projects would not have been possible.

“The last day of 2020 coincided with the last day of the implementation of the Southern Gas Pipeline project, which is of great importance not only for the development of the Caucasus but also for the wider region: for stability, predictability and cooperation,” he noted.

“Azerbaijan is still among the largest investors in the Georgian economy. This is a credit to the reforms implemented in the country, thus creating a positive and favorable investment climate. I know that many Azerbaijani companies want to work in Georgia, and I hope that will happen,” the President said.
After inviting the President to visit Georgia, Georgia’s PM recalled the words spoken by Aliyev’s father in Tbilisi, that “The brotherhood of the Georgian and Azerbaijani nations is our destiny. Thus, we are interconnected and interdependent.”

According to Sahiba Gafarova, Speaker of Azerbaijan’s Milli Majlis National Assembly, who hosted the PM during his visit, Azerbaijan and Georgia have signed more than 100 intergovernmental documents, with 15 documents now under consideration, creating a legal framework for relations in numerous spheres.

“Last year, despite the pandemic, the trade turnover between our countries amounted to over $500 million,” Gafarova noted. “Today, Azerbaijan is one of the largest investors in Georgia’s economy, and Georgia is an active participant in the international projects implemented by our country. Azerbaijan and Georgia play an important role in European energy and transport security via the Baku-Tbilisi-Ceyhan and Baku-Tbilisi-Erzurum gas pipelines.”

This week, the Georgian PM also met with Kelly Degnan, US Ambassador to Georgia, in Tbilisi.
Their conversation focused on key directions of Georgia-US strategic partnership across a variety of areas, notably security cooperation, the global challenges posed by COVID-19, and the process of vaccination.

The PM welcomed the arrival of USCGC Hamilton (WMSL 753), the fourth Legend-class cutter of the United States Coast Guard, in Batumi, emphasizing that this visit demonstrates the importance of the Black Sea for Euro-Atlantic security, and bolsters both security cooperation and regional peace and stability.

The parties also singled out the importance of rapid vaccination and joint efforts for effectively combatting the pandemic.

“This was an important opportunity to discuss with Prime Minister Garibashvili many of the issues on our agenda. There are a lot of priority issues that we are already working on with the government, one of them being, of course, COVID response and the vaccine rollout,” Degnan said afterwards. “We are hoping that Georgians will go out there and get vaccinated. We’ve had very good success in the United States, where over 55% of the adult population has now been vaccinated. I have been vaccinated; my teenage kids have been vaccinated. We see that this is the way to reopen our economies, reopen our schools, and get life back to some kind of normal.

“We also discussed our security agenda and many different issues we are working on. We have coast guard cutter Hamilton visiting Batumi. US Navy vessels love coming to Georgia, and we’ve been doing some good training with the Georgian Coast Guard. I’m very impressed with what the Georgian Coast Guard is able to do; its level of capability, its professionalism. And we are delighted to continue to cooperate with Georgia all across the security sector.”

Also for her part moving diplomatic relations forward, the Minister of Culture, Sports, and Youth Affairs of Georgia, Tea Tsulukiani, met with the Ambassador of France to Georgia Diego Colas this week to discuss the possibilities of future cooperation in the field of culture, sports, and youth.

The Minister is to visit Leuville in France on May 20. In 1922, the mansion provided refuge to exiled Georgian leader Noe Zhordania and his government-in-exile. The 4.5 ha estate where the Georgian government was located was handed over to Georgia by France in 2016.

The main purpose of Tsulukiani’s visit will be to hold meetings with the municipal authorities regarding the estate, as well as with the descendants of representatives of Georgian political emigration. The Minister will get acquainted with the first phase of rehabilitation works carried out on the Leuville estate under the auspices of the Ministry of Foreign Affairs from 2018 to date, and she will discuss the implementation of the next stages with all stakeholders. As a result of the work carried out, a cultural center is to be arranged at Leuville.

At the meeting with Ambassador Colas, the Paris Book Fair was discussed, an event which has been postponed several times due to the pandemic and is expected to next take place in 2023. The Ambassador noted that the French Embassy will support Georgia’s participation.

Minister Tsulukiani also met with the Ambassador of Germany to Georgia Hubert Knirsch to talk about deepening cooperation between the two countries in the field of culture, sports, and youth.

The German Ambassador highlighted the historic German settlements in Bolnisi municipality, where several houses have been granted the status of cultural heritage monument. He noted the German side is ready to rehabilitate several houses in the area in accordance with Georgian legislation. He also discussed with Tsulukiani the upcoming Frankfurt Book Fair and UNESCO’s naming Tbilisi as Book Capital 2021.