Why I Danced. Part II 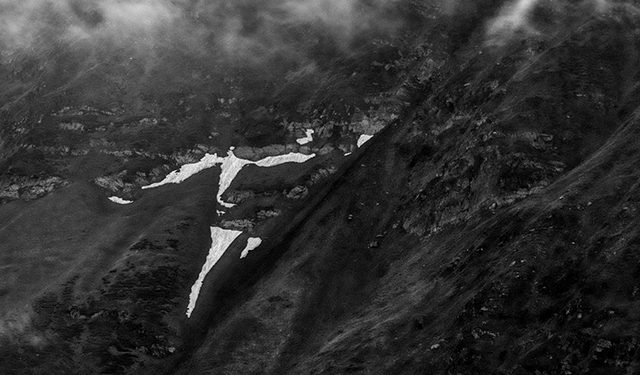 Continued from Part 1: Four young men of Etseri are heading towards a giant snow figure to attack it and seek to change the fortune of their village.

Soon the landscape of the Greater Caucasus on the other side, north of Etseri, rose into view to meet them, a day’s horseback and more away. Of all the mighty peaks in that long chain, only one was free of the cloud which drifted across them, dominating the scene in typical fashion, cutting upwards like an axe blade: Ushba. The sight both cheered and sobered them with its harsh splendor; indeed, they felt that the seeing was in both directions, the Mountain watching too. Their target came nearer, not far below the top of the Mountain Wall itself.

From up close, the Dancer was much different in form from what they had seen from their homes, becoming merely several connected masses of snow and ice several feet thick. His limbs’ edges and outlines were fuzzy with melt, delicate and dripping in the hot sun. But it might be days or even weeks before he completely disappeared into the Enguri before being reborn again, a frozen phoenix made of the same water which had created him every season back into the distant past: frozen, melted, evaporated, and then dropped down again as new snow, an unending cycle repeated as long as the world itself remains. And they knew exactly which parts to work on, and which one to leave to suit their purposes.

They tied their horses to scrub to graze on the mountainside grasses and drink from meltwater puddles, and stopped similarly to eat their bread and cheese to gain energy before attacking the task which was their whole reason for journeying up here. As it was Demetre’s idea and persuasion which had brought the four, he directed them, a natural leader:

“Ramiz, you take that arm over there. Start where it’s widest and thickest, breaking up the snow and shoveling it downhill where the warmer ground will melt it fast. We don’t want anyone else have time to see and interfere! Guladi, this leg here nearest me, same thing. Try to shovel where Ramiz isn’t working. Tengo, that arm. I’ll help you as it’s the biggest.”

They split up and threw their backs and arms into it, far out of the usual snow-shoveling season but still tightly muscled from plowing, hay-scything, woodcutting and wrestling one another just for fun. The sun bore down on them, but they were used to the elements and inspired for the job. If only they could better the life of their whole village even if it meant at the same time taking some success from others! Here, the jealousy had almost always run high, leading to age-old quarrels, feuds, bitternesses, instead of the farther-seeing cooperation which would have benefited all and made the Svans famous, not infamous.

Hurt was piled on hurt over decades, centuries; memories running deep, grudges held dearly.
However, these young men did not know what they were awakening: me. I felt pain cutting into me instead of the usual slow dissolution which the sun’s rays brought over weeks. Turning my head, I focused a lens of ice and brought it to bear on my little tormentors, seeing them. Their speech and intentions vibrated through my crystals, and I understood their intentions: to dismember me for their own gain and others’ expense. This would harm not only me but most of Svaneti, which would at least hear of their willfulness and seek retaliation, only perpetuating the ancient pains. It was intolerable: not only that they were cutting me up ahead of my time, but that their hearts were twisted, thinking good but trying to accomplish it through malice, which can never in the end work as intended. There must be a reckoning. The dance began.

I fell upon them, rolling over and over, bearing each writhing boy down the mountain inside my arms and legs and torso. I was going to perish for the year soon anyway: better now, like this, than to allow such wrongness to take root and become an unnatural, even anti-natural tradition! The laws of the world would be strained to breaking point, and untold chaos given rein.

[Original ending, which I replaced for being too bleak- read the chosen ending next week: We rushed on towards the frothing Enguri and suddenly were lost in its churning, borne away downstream and gone. The horses I left, rearing in fright, because they were innocent of all ill will.

One person, sister to one of the boys, had seen them go up but did not know their plans. And she thus also saw their terrible fall in the strange avalanche. She screamed out their names, ran home sobbing, had to be calmed down before her parents could get the story out of her: Ramiz is gone, I saw it through the telescope! Also Tengo, Guladi and Demo! Oh God, why, why did this happen! Take me instead, but bring them back to us!

Soon, the whole of Etseri had heard, and was in an uproar of wailing. Not only were the young men dead, but there would be no proper wake for them as their bodies could not be found! Just empty suits laid out in coffins, hat to shoes, going into otherwise graves, and the agonized hearts of those abandoned for a stupid wish. The hardest funeral of all kinds, one for the lost. The valleys echoed with cries for days.
But had they learned their lesson?

It took time. At first there was a desire, especially among the fathers of the dead boys, to continue attacking me in revenge every year, every time I formed. Eventually, after some more losses attributed to avalanches, there was an actual turning around in the whole region, a communal promise sworn to leave me to come and go as I will each year. To not worry so much about fate, but rather to work towards making things better for each other as well as for oneself. This is the good which came out of death and sorrow.

May they one day understand, forgive me for my part, and grow wiser and stronger for it. Otherwise we are all lost: I, the Dancer, and the people which are part of creation’s pinnacle, small though they are.]