Why I Danced. Part I 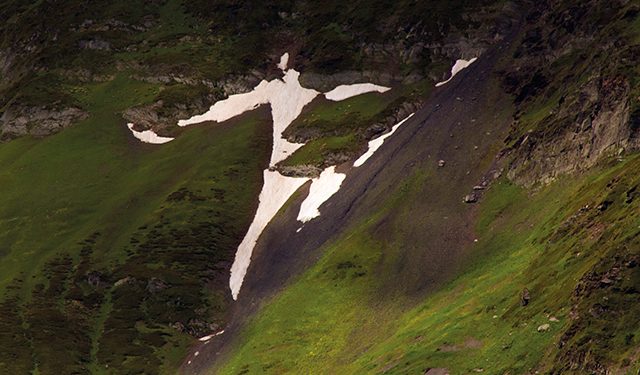 My 2nd Svan tale, but published 3rd, set like the others in the silent Middle Ages.

Dedication
My neighbor, having read the Georgian translation of my first Ungathered Svan Tale, Legend of the Grandparents, and begged for more, can now peruse the next one. He told the original version to me, so I dedicate my retelling to him: Ramaz, this one’s for you, dear friend.

Prologue
Every year, without fail, as the snows on the Mountain Wall across the Enguri River above Etseri village begin to melt under the influence of the summer sun’s growing presence, a figure is revealed on the near-vertical slopes. It is unmistakably that of a man dancing, holding a banner which waves in the breeze. What does he mean by this?

The inhabitants of the villages of the area who can see his appearance know. Pari (“shield” in Georgian), Etseri (“help” in Hebrew), Tskhumari, all nearby; and others out of direct sight who know the story. Much seemingly depends on this dancer as he gradually disappears, his form partly melting and running down, partly sublimating up into the very air.

All these people above a certain age grew up being told this: that whichever of the man’s limbs vanishes last, in other words survives the longest, the village or part of Svaneti to which that appendage points will have the best fortune in the coming year. They wait and watch now, having learned the hard way that to interfere in this process unnaturally can only, at best, give nothing, and at worst reverse the blessing, turning it fiercely against them while allowing others to flourish.

It might seem odd that one has to wait until long after midsummer to discern the fate of a particular area of snow. We are not, after all, at Arctic or Antarctic latitudes; a handful of days’ walk away are subtropics, palms and citruses! But such are the vagaries of the sun’s changing passage here and the angle of the Mountain Wall in relation to it that precisely this place is allowed to continue being draped in white until so late. One might be forgiven for thinking in midwinter that surely that Wall cannot shrug off all its vast and deep accumulation of snow, no matter how strong the sun beating against it. Autumn, and a new winter, will after all return, with even more snow! But the Wall does emerge all in green, the whole thing, except for one or two peaks which seem to be connected to it but are in fact far behind it and much higher than the Wall. It is only our perspective which links them, and falsely at that. The snow drips and rushes into the roaring canyons of the Enguri, and thence eventually into the Black Sea.

* * *
It was on such a midsummer long ago that Demetre, impatient from having observed for days, roused his friends in Etseri to cross the Enguri, climb up, and attack the Snow Dancer with shovels. Their plan was to cut off and destroy all his limbs except for the one which pointed straight to their village, precisely in order to guarantee it a good, prosperous, successful and in all ways happy year, while denying the same for all other villages and regions of Svaneti which came under the reach of his frozen exertions. They knew that they would be quite visible in this endeavor if they went by day, unable to hide, but decided to proceed anyway. The risks of doing it by night were simply too high, especially given that they wanted good fortune for their troubles, and not evil!

On a fine sunny summer morning, the four of them packed saddle bags with food, water and ropes, and lashed spades to their horses’ saddles for good measure. They set off down through Isk’ari hamlet, crossed the main rod through Upper Svaneti, and continued through Ladreri. Then more steeply down, nearly sliding forward over their steeds’ necks, towards the bridge over the Enguri. This whole process took more than an hour, as it was much further to the bridge than was obvious from above. Across the boiling waters far below, then up, up the other side through Gvalderi before they were even level with their departure point.

The seemingly insignificant streamlet which they had to cross now was actually, when one was upon it, much too fast and deep for a strong man to stand up in; he would simply be knocked right off his feet at first step and swept away to the Enguri which this melt-river fed along with many hundreds of others. But the young men knew that their horses had better sense than to enter the river if they could not traverse it and, trusting them as they had many times before, they were borne slowly safely over the rock-laden gush. Following the ancient cattle trails, they continued to ascend, back and forth but always upwards.