Where We’re At: Etseri, Svaneti 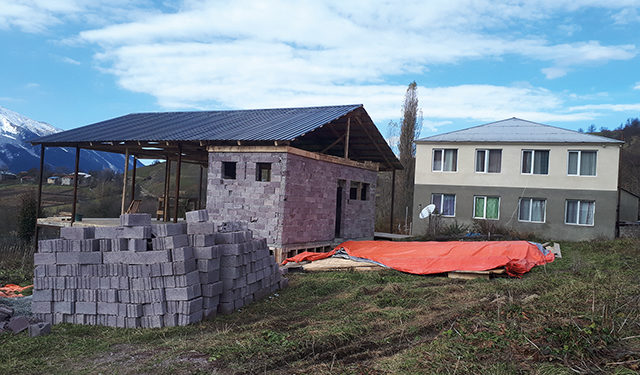 Well, a little stressed out is where we’re at, what with the fits and starts of the café building process.
When we bought the house and started renovating it about 11 years ago, there was not a window in it, no electricity or water. The nearest place from which to have the necessary double-glazed windows ordered was Zugdidi, 110 km away. Each hole had to have its old rotten thick wood frame knocked out and then be measured carefully. We could only bring 2 or 3 windows up at a time in my 4×4 Hyundai. But that was okay, as we couldn’t afford more than that many at a time, anyway! 2 years later, we had all the windows in: 25 of them at about 220 GEL a pop.

Fencing was another big project, as the land had been open to the bovines for about 10 years. Slats, posts every two meters, and wire. A straight steel bar to make post holes in the ground with; a sledgehammer to pound them in; pliers and wire cutter. Plus at least 1 other person to help, initially showing us how fencing is done up here in Svaneti, then anyone who had learned that alongside me, such as my wife’s brother-in-law, because it’s much easier as a two-person job.

More and more: the garage, built by aforementioned bro-in-law plus Lali’s father, a legacy to him now he’s gone. A gazebo by a travelling American who offered to make things for room and board. The initially essential outhouse, first new “building” on the land, made by Lali’s brother and me.

As it was, getting materials and transporting them were always difficult procedures, given limited local availability and big trucks. Even planks had to be bought green, so very heavy, and dried by us on-site for at least 6 months if we needed them to be flat. Until Mestia developed, even sand and gravel had to come from around Zugdidi. 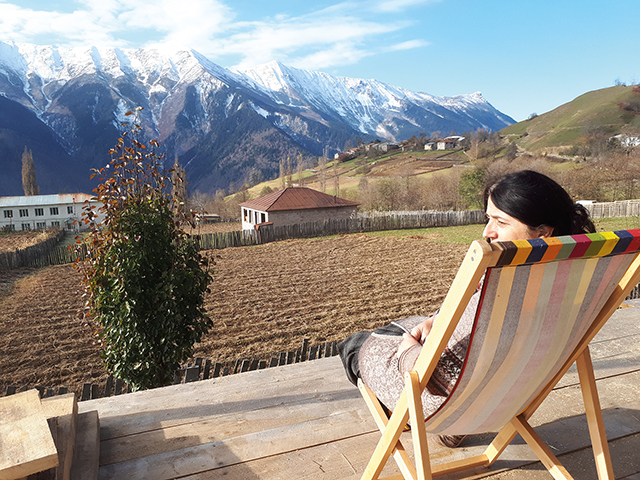 Now, at least, there is a BIG building shopping center in Mestia, for everything from the smallest nails to drywall/sheetrock, cement, all the tools you could want, electrical and plumbing supplies, and all in between. That cuts our buying distance from a 220 km round trip to about 60. Ditto for sand and gravel, dredged from the Enguri River in Mestia. Cement blocks too, even closer: from the factory at Becho, a 20 km round trip.

Transport, though, remains the bottleneck. It’s rare that the seller of your goods has any kind of vehicle available to get your things to you. I would simply throw money at it, but no: this you have to organize yourself. Also the warm able bodies to unload what you’ve bought (usually loading at the far end can be done by the seller). Schoolboys from grades 10-12 are our best source, when they’re available and not digging potatoes or cutting trees with their fathers in the forest for the winter’s stove supply.

Our café builders, from Chkaduashi near Zugdidi, come highly recommended and do good work. But, as always in Georgia, family matters often take them away and delay work. Today it was an ormotsi, the 40 days after death memorial, of the aunt of the main guy. He drove down from Mestia, rounded up the other two before I could even give them brunch, promised an evening or tomorrow morning return, and whisked them off.

We are looking at weather forecasts, gritting our teeth at every lost sunny, warm day before the snow descends for good, and hoping to have done what needs to be completed before that: interior cement walls, windows and exterior walls, to at least weatherproof the place before winter. Once this is in place, the interior finishing work can also proceed at a more leisurely pace even during that season.

Opening ceremony? No date in sight yet. Scheme for keeping the local men out of the place while still serving wine and beer, though no hard alcohol? Thinking carefully through options for that too. Video cameras and perhaps initially a bouncer. This is where we’re at right now.