US Amb. Emphasizes Importance of Unity for Georgia amid Russian Aggression 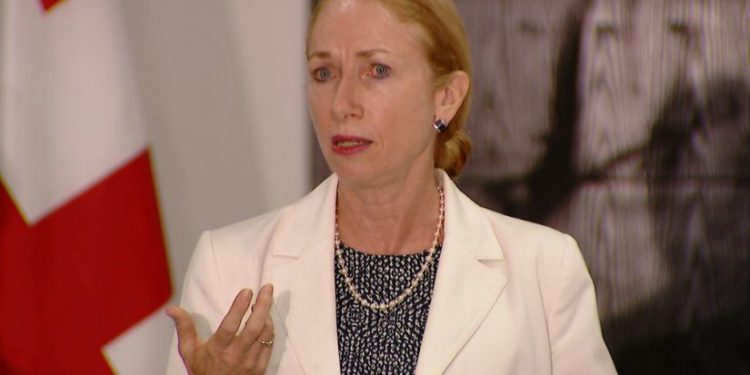 The US Ambassador to Georgia Kelly Degnan on Thursday released a video address on the occasion of the 100th anniversary of the Soviet occupation of Georgia, emphasizing the particular importance of unity for the nation during the Russian aggression.

“Today marks 100 years since the tragic day troops sent by the Kremlin occupied independent Georgia in 1921.

“The invasion by Soviet troops was in flagrant violation of a non-aggression pact that the Tbilisi government had signed in Moscow less than a year earlier.

“To commemorate that sad day, the US Embassy would like to present a collective reading by my colleagues of ’25 February,’ a poem by Kolau Nadiradze.

“The poem was published in 1985, but it speaks of the tragedy of the day when Georgians had their independence stolen from them by Moscow and saw their country subsumed into the Soviet Union.

“The poem symbolizes with heartbreaking clarity the difficulties of living under Kremlin rule during the Soviet period for the proud people of Georgia.

“Today, more than ever, we are reminded of how important a united Georgia is in the face of Russian aggression,” the Ambassador said in the video address.

On February 25, 1921, the Russian Red Army invaded Tbilisi and overthrew the Georgian government, which had been elected through universal and free elections, annexing the Democratic Republic of Georgia, a subject of international law. The Georgian Soviet Socialist Republic was established on 25 February 1921.

Based on the resolution of the Parliament of Georgia of July 21, 2010, February 25 was declared the Day of Soviet occupation.