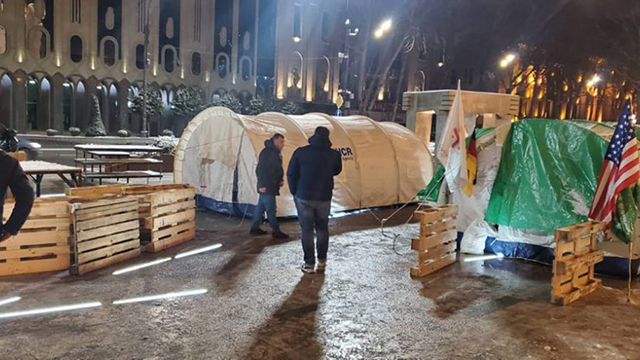 Politics in tents seems to be a perennial fixture on Rustaveli Avenue in the capital of Georgia. This marquee political life started here at the end of 1980s, and has continued right into the twenties of this century. I’m not in one of my pasquinade moods at all, and I’m not going to use any sharp-tongue lashes on those who want to exercise politics under a canvas in the street. Just the contrary: I want to get into the secrecy of helpfulness of this tabernacle political activity and answer the question as to why it is more useful to manage our people’s political existence within makeshift pavilions than inside the walls of the country’s legislature, where not everything might be fair and smooth among its members, but a political word can definitely come out stronger and louder so the nation can hear it.

Riots, mutinies and insurrections have certainly played their revolutionary roles in history as a part of almost every national reality, but all that remains the subject of endless discussions on how much good or bad those societal upheavals have brought to humankind. Historians do not speak of them in unison, opinions differ and thoughts are extremely disparate, so nobody can say for sure what is more constructive and functional in the end – talking the nation’s wounds and pains under the roof where the wisest elected men and women of the nation can wrestle on the floor, refereed by their watching electors, or sitting in insurgence-pregnant tents and simmering with rage and anger in expectation of a potential unrest, which will either be fair and productive or unfair and destructive.

The canvas booths deployed in front of the parliament building in Tbilisi for the entire world to behold, are taking us back into one of the darkest times of this country’s making – the soviets just gone and the new powers coming in to make an attempt to change the nation’s vector of development. Totally concentrated on introducing the change via shouts, barks and hollers, triggering aggression, cruelty and violence, it took us more than thirty years to make just a flimsy miniature step forward towards the contemporary balanced political culture, and now, back again into the tent culture!

Understandably, a young republic like ours has myriad flaws and only a small amount of merits, which does not mean that at every political discontent in the air we have to rush to streets and take up those interminable, déjà vu, unbridled political hostilities. Weighing sagely of what makes more sense in politics is what all of us here in Georgia have to give a preference to, not to our unfounded desires to go and grab the ruling reins at any cost, with any effort, on any looming occasion, without any sense of feasibility of achieving the goal.

I’m not into politics. I’m just into my beloved art of words, but the problem today is how to make the word, which hopefully still has some value, as truthful as possible, not lying to anybody, not damaging the nation’s future, not hurting the innocent, and not losing the precious journalistic conscience. Having this in mind, I need to admit that I hate the tent political culture which I see as a distortion of this country’s young political image, fortunately tending otherwise to be compatible with freedom and democracy, and not only that.

It seems like a huge waste of time, notwithstanding the fact that not all is fair and good in the Republic. Politics cannot always be flat, soft and silky: politicians on both sides, on every side that be, are prone to making blunders which should not be taken as a catastrophe. Mistakes need to be corrected in the smartest possible way, not via denigration.

Freedom of speech allows the vilifying of an opponent without any consequential problems, but the liberty of political behavior does not have to be as excessively misused as it is in this land. The tent culture is an obvious continuation of that ugly style of political interaction which has lead this nation to exactly where we are right now. And we are in the tents in front of Parliament, not inside it where our political prospect belongs.