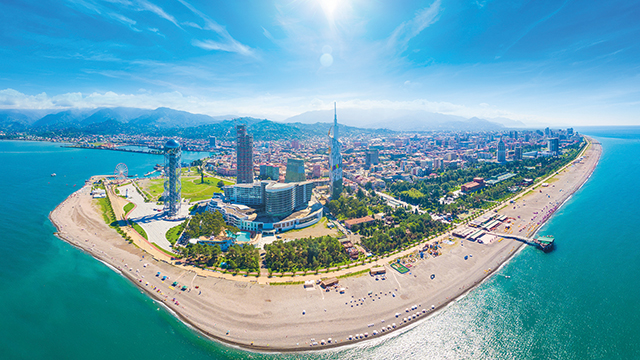 The Ajara Autonomous Republic (Ajara AR) is one of Georgia’s most vibrant and fast-growing regions where speedy economic growth benefits from the environmental and social agenda. The European Union and the United Nations Development Program (UNDP) have been supporting the Ajara AR for over a decade, assisting to promote strong, open and transparent regional governance and achieve sustainable rural development. The EU and UNDP support has also focused on piloting innovative approaches to development and creating enabling space for people and nature.

UNDP Resident Representative in Georgia Nick Beresford visited the Ajara Autonomous Republic on 18-20 May to launch new initiatives under the EU and UNDP-supported projects.

Beresford attended a public launch of the Ajara AR Supreme Council’s Strategy for Institutional Development and Communication, prepared with the EU and UNDP support. He also signed a trilateral statement of intent with the Batumi City Hall and the Batumi Technopark of Georgia’s Innovation and Technology Agency (GITA) aimed at promoting new businesses and developing a startup ecosystem in Batumi. This initiative is part of the EU and UNDP support for Georgian municipalities in designing municipal transformation portfolios.

At the meeting with the Batumi Mayor, Beresford discussed emerging opportunities to promote sustainable waste management practices at the municipal level, explored by the UNDP’s Accelerator Lab in Georgia.

The visit continued in the Machakhela National Park and the highland villages where Beresford checked on the progress of rural development and ecosystem conservation projects rolled out with assistance from the EU, UNDP and the Ajara AR Government.

The EU and UNDP support for the Ajara Autonomous Republic draws on the resources made available by several nationwide EU-funded initiatives, including the ‘European Neighborhood Program for Agriculture and Rural Development’ (ENPARD), the ‘Mayors for Economic Growth’ (M4EG), and the ‘Assistance to Parliamentary Democracy in Georgia’.