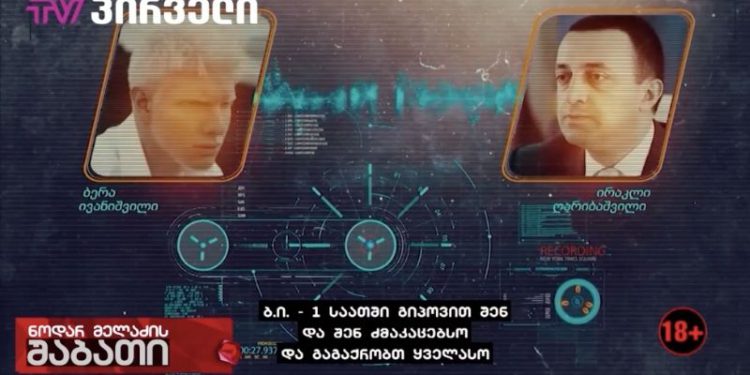 The audio recordings used in journalist Nodar Meladze’s program on TV Pirveli, containing a conversation between Bera Ivanishvili, the son of former chairman of the Georgian Dream Bidzina Ivanishvili, and Prime Minister Irakli Garibashvili, were falsified, the Prosecutor’s Office of Georgia says.

The author of the story notes that Anzor Chubinidze, the head of the Special State Protection Service, was also participating in the telephone conversation, with whom, based on the recording, Ivanishvili and Garibashvili were discussing the revenge plan separately.

Based on the recording, Bera Ivanishvili tells Irakli Garibashvili that Anzor Chubinidze’s punitive team intimidated a juvenile and forced him to apologize in a humiliating environment in the presence of his family and neighbors.

Prosecutor Amiran Guluashvili stated at the briefing today, June 18, that the audio recordings show traces of editing and absolutely all of them were made as a result of montage.

The investigative agency confirms that Bera’s bodyguards actually visited the authors of the negative comments against him at home, but also insists that there was no violence or threats from them.

Prosecutor said that as a result of the investigative-procedural actions carried out during the investigation, it was established that the mobile phone numbers belonging to Irakli Garibashvili, Bera Ivanishvili and Anzor Chubinidze were secretly wiretapped from October 2011 to October 2012.

“Wiretapping in relation to several criminal cases began on October 4, 2011, on the instructions and organization of officials in charge of the Constitutional Security Department, a day before Bidzina Ivanishvili formed an opposition political party and made a public statement about running in the 2012 parliamentary elections.

“Wiretapping was carried out in relation to 13 criminal cases, namely. Examination of the materials of the mentioned cases shows that Irakli Garibashvili, juvenile Bera Ivanishvili and Anzor Chubinidze had no connection with the facts mentioned in the cases,” Amiran Guluashvili stated.

He explained that there is no investigation in the direction of the responsibility of journalists or media outlets for disseminating the recordings in public.