Olivér Várhelyi: We Came with Very Clear Purpose – We Want to Help you Prepare Georgia to Join EU 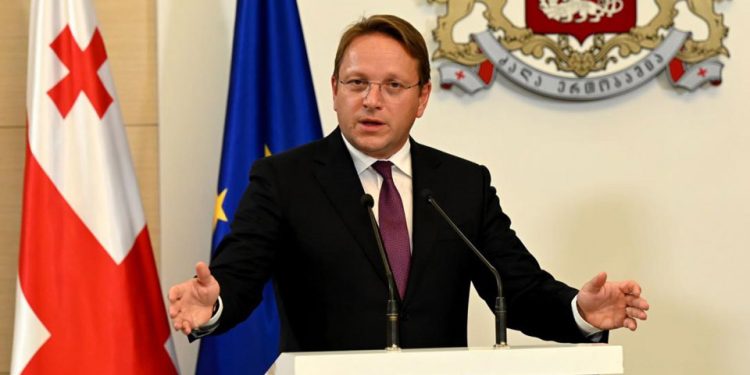 Olivér Varhelyi, the European Commissioner for Neighborhood and Enlargement visited Georgia. He met with the Prime Minister of Georgia, Irakli Garibashvili, after which they held a joint press conference.

Varhelyi noted it has been more than a year since he last visited Georgia. “To tell the truth, I see development – the economy is booming, I walked around the city and it is obvious to everyone that the economy has been developing over the last year,” he remarked.

Varhelyi outlined there is progress in Georgia, adding he came as European Commissioner for Neighborhood and Enlargement. “This is happening for the first time in this capacity – I came not only with the mandate of a neighborhood, but also with the mandate of enlargement, and both directions are important,” he noted.

Varhelyi emphasized that Georgia has shown us very clearly that it is Georgia’s solid goal to join only the European Union, adding it is clear to them that the vast majority of the population of Georgia supports European Union integration.

“Today we came with a very clear purpose – we want to help you prepare Georgia to join the European Union. We want to move forward together in this direction. We have a lot of work to do in the coming weeks and months. Georgia will have to make a big effort to show that it is ready to become a candidate country, but I must emphasize that this will only happen if the whole country, all of Georgia, and all Georgians inside and outside the country work for this goal. I am sure that history never gives the same chance twice, so we should embrace this opportunity and make it a reality,” stated Varhelyi.