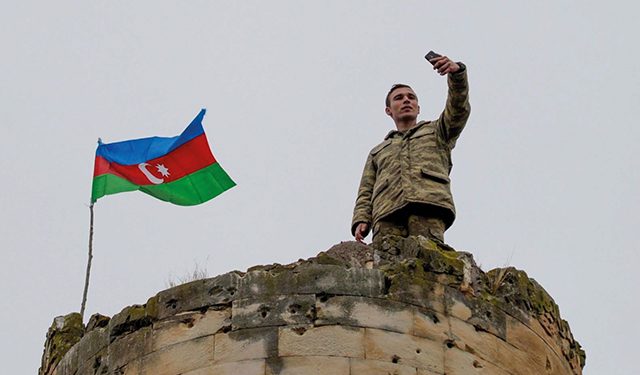 An Azerbaijani soldier takes a photo on top of a tower in Nagorno-Karabakh. Source: AFP Photo

Almost two years since a war that shook South Caucasian relations, Armenia and Azerbaijan are again making changes to the region. Despite both sides reporting violations of the ceasefire that brought combat to an end in November of 2020, diplomacy has largely prevailed. The key trade route running through the border town of Lachin (Berdzor) is at the center of the next chapter in the region’s most tenuous relationship.

However, the means with which this town and its thoroughfare came to center stage was not without its violent scenes. Russian peacekeepers, deployed as a part of the peace agreement in 2020, have had a dubious part in keeping the two from coming back to armed conflict again. With the Azerbaijani military on the move, Armenian civilians moving in the opposite direction, and a new road and Russian military base under construction, the region is facing a new chapter.

The new road, aptly referred to commonly as the Stepanakert-Goris route, has only recently been completed. “That temporary section of the new route connecting Artsakh to Armenia is completely asphalted,” spokesperson to the minister of territorial administration and infrastructure of Artsakh Viktoria Petrosyan said. Additionally, she said it is in use and Russian peacekeepers are already carrying out their duties along the road.

According to the stipulations of the ceasefire in 2020, this new road is to bypass certain areas of Azerbaijani-controlled Nagorno-Karabakh. One key area that was to be relinquished is the key passageway of Lachin. Since the war, the town was the only proper route into the region, making commerce and trade complicated, despite the deployment of peacekeepers at the crossing.

The plan was for the new road system to be built within three years of the signing of the ceasefire. While neither side was specified, Azerbaijan, the builder and backer for the project, sent construction crews to begin the project. Upon completion, Russia had agreed to relocate its peacekeeping contingent according to the new road and crossing point, tasked with the same stability mission.

However, prior to the completion of the project, Azerbaijani forces made a move that caught both Russian troops and Armenian forces deployed near the region by surprise. In early August, video and images of Azerbaijani soldiers seizing hilltops by force in the region began to surface. The Azerbaijani Ministry of Defense even released a video showing one of their drones striking an Armenian artillery base. Casualties were reported.

According to the Ministry of Defense, the strikes were “an anti-terrorist operation against illegal Armenian armed groups in the territory of Azerbaijan, where the Russian peacekeeping contingent is temporarily stationed.” Following these attacks, Azerbaijani forces were seen moving into Lachin and neighboring towns in armored convoys, with the new road projects still incomplete.

“Today, on August 26, we – Azerbaijanis – returned to the city of Lachin and took control over Zabukh and Sus villages,” Azerbaijani President Ilham Aliyev posted on social media.

These statements, along with the forceful measures taken, are unlikely to be the conclusion to the conflict the region needs. The Russian peacekeepers have lost much of the trust they had from the Armenian populace, causing many to resort to fleeing their homes and surrendering territory. Azerbaijan has continued to seek more ground in the Armenian-controlled parts of Nagorno-Karabakh, constantly keeping pressure on Yerevan’s troops.

This makes the propensity for renewed fighting all the more realistic. One particular avenue is a connecting bridge of territory between Azerbaijan proper and its satellite region of Nakhchivan to the southwest. While a trade corridor is planned, the opportunity for Armenia to use this as leverage is too much for Baku to allow.

To prevent future hostilities, a proper and effective mediation force should be in place. With Russia and Turkey having a vested interest in the region and obvious biases, a European-centric force similar to that in Kosovo’s KFOR would work to greater effect. Rotating elements from NATO, sans Turkey, and NATO’s allies would be able to connect more warmly with authorities in Baku and Yerevan.

Both Azerbaijan and Armenia have strong ties to the European community. Along with economic, political, and social leverage, a European task force has the ability to bring both to the peace table. Russia, already preoccupied with events in Ukraine and having a marred image on the world stage, does not possess the capacity to ensure stability in Nagorno Karabakh.

Along with economic, political, and social leverage, a European task force can bring both to the peace table

As the contested region moves into its next chapter, more attention must be paid to its long term future. Another war could lead to the collapse of either nation and a crisis in Europe. Already being shunned, Russia’s peacekeeping force has outlived its effective ‘shelf life’ and could use a more effective replacement.

While EU figures like Charles Michel, the President of the European Council, and members of the OSCE Minsk Group have worked hard for peace, more is needed. Europeans have proven their ability to establish peace while remaining firm. As a friend politically and militarily to both sides, Europe and NATO offer a unique set of capabilities to begin the long-term building of bridges between a people torn apart for decades.