MIA on the Vake Park Arrests so Far, and the Faulty Wire which Killed Marita 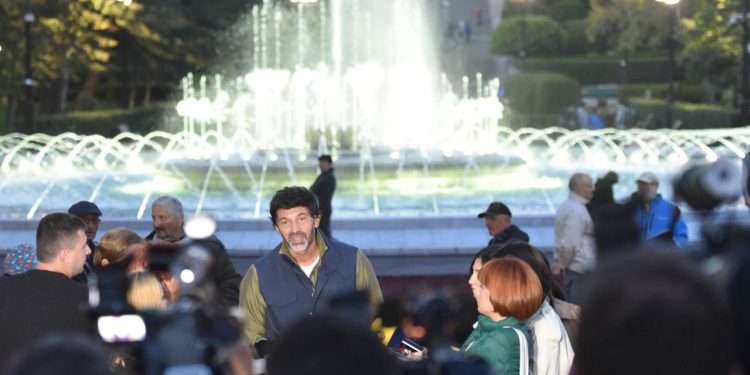 Based on the information of the Ministry of Internal Affairs, the investigation into 13-year-old Marita Meparashvili’s death revealed that in relation to the fountain in Vake Park, there was a violation of construction norms and rules, as well as the falsification of a document.

“The employees of Tbilisi Police Department of the Ministry of Internal Affairs and Vake-Saburtalo Police Main Division, as a result of investigative and procedural actions, arrested 9 people in connection with the incident that took place on the territory of Vake Park on October 13.

“The investigation established that on October 22, 2021, an agreement was signed between the Environmental Protection Department of the Tbilisi Municipality and Greenservice+ LLC, regarding the construction of the fountain and the fountain cascade located on the territory of Vake Park.

“On August 26, 2022, on the basis of the acceptance-handover act between the parties, the city service of Environmental Protection of Tbilisi City Hall took over the part of works performed on the fountains.

“Despite the completed works on the central fountain, the Deputy Head of Environmental Protection City Service of the City Hall – G.V., requested the manager of Greenservice+, A. M., to envelop the black water pipes of the electric motor in the fountain with a stainless white construction.

“A. M. informed the director of Greenservice+, L.F., who, in turn, instructed him to order the performance of the mentioned work to the representative of their own subcontractor company – New Metal Design LLC, L. Ch.

“L. Ch., in turn, assigned the execution of works to private electric welders – G.G. and V. G. The supervision and control of the work performed by them was assigned to a work performer of Greenservice+ LLC, B. M.

“On September 22, 2022, the electric welders violated the safety norms during the performed works, in particular: In order to fit the stainless metal construction on the water pipes, they removed the metal grill for the electric motor, and, while re-attaching it, ran an electric wire between the concrete surface and the grill, as a result of which the insulation of the wire was damaged.

“If the mentioned persons had performed their duties properly, the damage to the electric wire would have been detected and the consequences avoided.

“The investigation also established that Greenservice+ signed an agreement with Mshenexpert LLC in order to prepare a mandatory report for the concluding acceptance-handover act with Tbilisi City Hall’s Environmental Protection City Service.

“Director of Mshenexpert LLC, N. K. and inspector D.T. inspected the value of the volume of the performed works, the project of which was handed over to Greenservice+ employee, D. K.

“Since the content of the mentioned conclusion did not meet the mandatory requirements specified in the contract signed between Tbilisi City Hall and Greenservice+ , and the Environmental Protection City Service of Tbilisi City Hall would thus not take over the works performed by Greenservice+, D.K. in exchange for the continuation of future business relations with the firm, persuaded the director and inspector of Mshenexpert LLC to add to the report that they had studied the compliance of the performed works with the construction norms and rules in force in Georgia.

“On August 25, 2022, D.T. and N. made a fake official document – an inspection report, in the final part of which they claimed that the performed works were in compliance with construction norms and rules in force in Georgia.

“The mentioned fake conclusion was presented to the City Office of Environmental Protection of the City Hall by the director of Greenservice+, L. F., which became the basis for the signing the act of the acceptance act between the parties.

“The employees of Tbilisi Police Department of the Ministry of Internal Affairs and the Vake Saburtalo Police Main Division have conducted several hundreds of investigative and procedural actions in a round-the-clock regime since the investigation was launched. They have repeatedly interviewed persons involved in the case, collected evidence from the place of the crime, as well as important documentation related to the case.

“The report on the trasological examination has already been received, and appropriate forensic examinations have been appointed in order to clarify issues existing in the investigation.

“On October 18, the police arrested all nine of the above individuals in Tbilisi based on the relevant court decision.

“Under Article 342, part II of the Criminal Code of Georgia, which implies the neglect of official duties that result in death, the Deputy Head of the Environmental Protection Service under Tbilisi City Hall was arrested.

“The director of Greenservice+ has been arrested under Article 220(1), II part and Article 362, part I of the Criminal Code of Georgia, which refers to negligence that led to the loss of human life and the use of a falsified official document.

“Under Article 220(1), II part of the Criminal Code of Georgia, which refers to negligence that led to the loss of human life, the manager of Greenservice+, B.M., and representative of New Metal Design LLC, L.Ch, were also arrested.

“Employee of Greenservice+, D.K., was arrested under Article 25-362, Part 1 of the Criminal Code of Georgia, which implies inciting the production of a forged official document.

“Under Article 362, part I of the Criminal Law Code of Georgia, which refers to making and selling a falsified official document, the director of Mshenexpert, N.K, and the inspector of the same company, D.T., were arrested.

“Under Article 240, part II of the Criminal Code of Georgia, which refers to a breach of safety regulations, which led to the loss of human life, 2 individuals – private electric welders, G.G. and V.G., have been arrested.

“Investigative activities are still in progress, based on the obtained evidence, and the circle of accused persons may expand.

“In the course of the investigation, due to high public interest, the agency will periodically provide public with updated information”, reads the statement released by the Ministry.