Khoshtaria: We Spent Night in Front of Parliament. We Now Have a Legitimate Demand 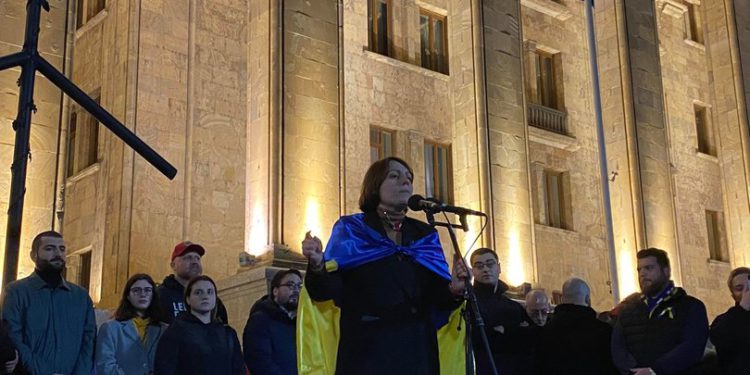 Elene Khoshtaria, the leader of the party Droa, told reporters that she and a group of citizens spent last night in front of the parliament. Khoshtaria said in the morning that plans had changed, noting that they have legitimate demands: ” that a government that embarrasses our country, that does not defend the interests of our country, does not fight for peace and is not on the side of Ukraine, should not represent us,” Khoshtaria said.

Yesterday, on March 1, citizens and opposition groups gathered in front of the parliament expressing their protest against the government’s decisions and demanding the resignation of Prime Minister Irakli Garibashvili. As they note, they feel ashamed due to the government’s actions since Russia started the invasion against Ukraine.

“We have to start providing effective assistance to Ukraine and we have to take the opportunity to apply for EU membership. We will also have meetings with community groups during the day, in parallel with the rallies, with groups of young people, people of different professions, because, in the end, this protest is not for any party,” Khoshtaria said.