3 Demands of the Opposition and other Groups to the Government 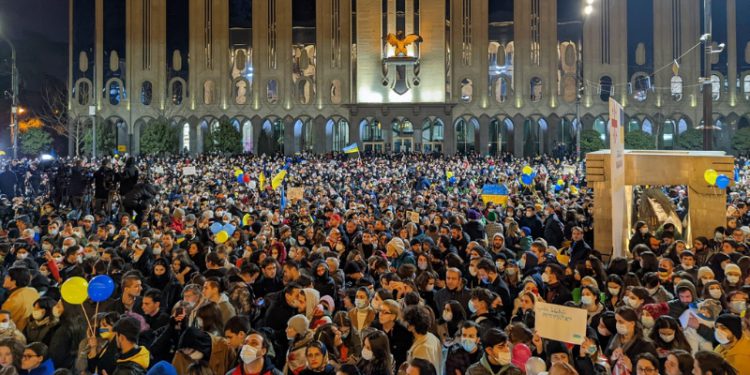 Elene Khoshtaria, the leader of Droa, voiced demands at a rally in support of Ukraine on Rustaveli Avenue, which she said were agreed upon by parties and public groups.

“It turned out that solidarity alone is not enough, they (the government) crossed the line of betrayal in our country, they told us that we will not support Ukraine and added that they will not apply for EU membership, they told us that they will take away our country’s historic choice. We are people who love dignity and freedom, which we are showing to Gharibashvili and the Georgian Dream. Therefore, all parties and public groups have agreed that we need to formulate specific demands, which we all here demand and will surely achieve. We will liberate this country,” Khoshtaria said.

“Sending volunteers to Ukraine means a direct involvement in the military conflict – we will not do that,” Irakli Kobakhidze, Chairman of the Georgian Dream party, told reporters today.

He added that Ukraine’s membership in the EU would take many years because there is a specific legal document according to which no country can become a member of the EU until all its obligations are met.

“This applies to Georgia, Moldova, all countries equally. As for Georgia, we will submit such a document to the EU in 2024. By 2024, we will have a serious part of the obligations fulfilled, after which it will be a rational basis for our application. We have had preliminary consultations with EU officials. They explain that the offer of EU membership is relevant to Ukraine, which is at war, but not relevant to Moldova and Georgia,” Kobakhidze said.

The President of Ukraine, Volodymyr Zelensky, recalled the Ukrainian ambassador from Georgia due to the obstacles being created for volunteer soldiers wanting to travel to Ukraine and due to Georgia’s not joining the sanctions.

Citizens and opposition groups gathered in front of the parliament are expressing their protest against the government’s decisions and are demanding the resignation of Prime Minister Irakli Garibashvili. As they note, they feel ashamed due to the government’s actions since Russia started the invasion against Ukraine.