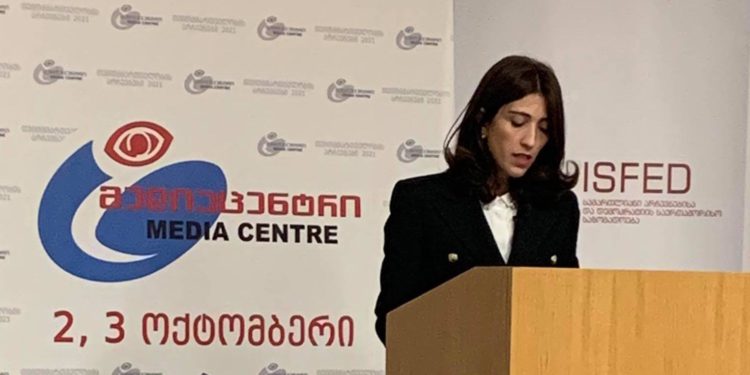 The observers of the International Society for Fair Elections and Democracy (ISFED) reported violations of the secrecy of vote during the October 2 self-government elections.

According to the findings of ISFED’s monitoring mission, violations of the secrecy of vote is still ongoing, namely, there were cases of voters showing their ballots before placing them in the ballot box to the people inside the polling station.

ISFED says multiple violations were reported at two polling stations in Marneuli, where various voters cast their ballots without presenting identification documents, as well as without going through the inking procedure and the procedure of checking of inking. The secrecy of vote was also breached at the polling station. The organization requested an annulment of the polling results at the station.

Instances of voter names being marked by persons inside polling stations, along with their personal information being passed on to third persons, is still ongoing.

Restrictions on the rights of ISFED observers remains a problem; this mainly manifests in creating a hostile environment for observers. Such facts have occured from the moment the polling stations were opened and have taken place on a continuous basis.

Detailed information on the voting process by 17:00

According to the PVT results, the following voter turnout statistics was reported:

In 98.9% of the polling stations, polling was running in accordance with the Covid-19 regulations, which is statistically similar to the corresponding figure from the 2020 parliamentary elections 96.2%.

Observation of the outside perimeter of the PECs (PVT results)

ISFED gathered data from all 121 precincts of the sample, where it has deployed observers of the outside perimeters of the precincts. According to the PVT results:

Violations in the voting process
As of now, ISFED observers identified the following violations:

Voting without personal identification card/grounds for results annulment (2)
● At polling station #48 of the electoral district #22 (Marneuli), the majority of voters cast their vote without a personal identification document. Voters were casting their vote based on the assigned line number. Despite multiple notices, the election commission didn’t address the issue. Thus, ISFED requested to the relevant DEC to annul the polling results;
● At polling station #14 of the electoral district #22 (Marneuli), multiple cases of casting the vote without a personal identification document were reported. The inking procedure is neither properly done nor checked. Throughout the day, ISFED observers’ rights were restricted multiple times too. Secrecy of the vote has been multiple times violated by the commission member supervising a ballot box and envelope supervisor. Thus, ISFED addressed the relevant DEC requesting the annulment of the polling results.

Violation of the secrecy of vote (1)
● At polling station #19 of the electoral district (Abasha), around 15 voters showed their choice to the representatives of Georgian Dream and other members of the commission. Despite the chairperson’s notice, the issue hasn’t been solved.

Restricting the rights of observers (1)
● At polling station #15 of the electoral district #16 (Kvareli), ISFED observers are treated improperly, are insulted and deprived of the opportunity to fulfill their duty.
Obstruction of the work of commission members by observers (2)
● At polling station #12 of the electoral district #1 (Mtatsminda), observer of the NGO “Alternativa NGO” engages in close communication with the voters, makes noise, chaos, and thus disturbs the situation at the polling station. Despite being asked to address the situation, the commission chairperson did not react;

Problems related to electoral documentation (1)
● At polling station #46 of the electoral district #2 (Vake), there were 52 ballots in the ballot stack, instead of 50. The registrar issued an explanation on the matter.

The International Society for Fair Elections and Democracy (ISFED) is monitoring the October 2, 2021, Municipal elections in all electoral districts across Georgia (excluding the occupied territories).

ISFED will release the next statement at 23:00.