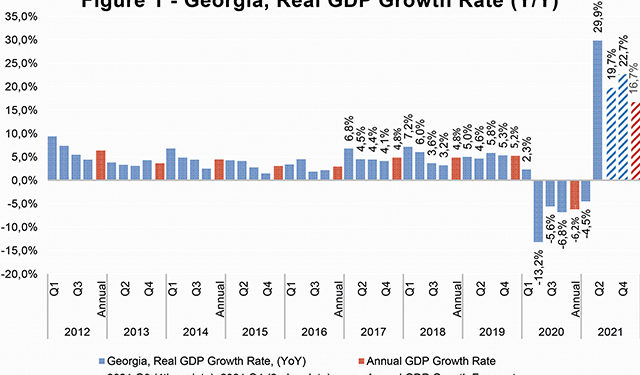 ISET-PI has updated its real GDP growth forecast for the third and fourth quarters of 2021. Here are the highlights of this month’s release:

HIGHLIGHTS
• Recently, Geostat has released the preliminary estimate of real GDP growth for the second quarter of 2021, which now stands at 29.9%.
• The real GDP growth rate reached 9.9% year-on-year in July 2021. Consequently, the estimated real GDP for the first seven months of 2021 amounted to 12.2%.
• ISET-PI’s forecast of real GDP growth for the third quarter of 2021 stands at 19.7%. The second estimate for the fourth quarter growth forecast stands at 22.7%.
• Based on July’s data, we expect annual growth in 2021 to be 16.7%. This number is most likely overestimated by the model at the current point in time. This is because the nature of the shock (a transitory lockdown event and difficult epidemiological situation) in the last three quarters of 2020 and correspondingly abnormally high GDP growth (base effect, increased external demand and higher commodity prices) in the second quarter of 2021, had not had relevant analogues in the Georgian data. However, the accuracy of annual growth forecast is expected to improve significantly once the third quarter data becomes available.
• In addition, the National Bank of Georgia revised its expectation for real GDP growth up from 4% to 8.5% in 2020. According to the Monetary Policy Report, among the reasons behind the prediction’s upward revision are recovery in external demand (expected improvement in exports of goods, a slightly slower increase in imports of goods and the gradual recovery of tourism exports), fiscal stimulus and credit growth.

GDP Growth by Sector in Q2
The Georgian statistics office, Geostat, has released its preliminary estimate of the GDP growth for the second quarter of 2021 (based on VAT taxpayers’ turnover data). The estimated growth in Q2 is 29.9%.

Variables behind the Q3 and Q4 GDP growth forecast:

During this period, the import of goods increased by 17.2%, driven by a increase in import of petroleum and fuel products from Turkmenistan and Azerbaijan (mostly due to a significant annual increase of crude oil prices on the international marke – 73.8% in July); Among other positively affected imports were: carbon steel and Portland cement from Azerbaijan; carbon steel rolling mills and telephones from Ukraine; petroleum and fuel products from Bulgaria; motor cars from Germany; polymers and ceramic tiles from Iran; copper ores and concentrates from Serbia and Chile; computing machines and their blocks from Hong Kong; and immune serums and hormones from China. In contrast, Georgian imports of motor cars from USA; and copper ores and concentrates from Brazil. Consequently, the trade deficit increased by 2% yearly, and amounted to 462.1 million USD. Overall, trade related variables still had a positive contribution to the GDP growth forecast.

Tourism Inflow
Tourism arrivals and receipts only partially recovered in July of 2021 after a sharp decline in 2020. In July, the number of international visitors increased by 403.7% yearly (which is still only 23.6% of the same measure in 2019), while the growth in tourist numbers (visitors who spent 24 hours or more in Georgia) amounted to 473.9%. Overall, recovered numbers of visitors and tourists, along with a moderate increase in touristic spending has made a small positive contribution to the growth forecast.

According to Geostat, FDI experienced slight increase in such sectors as health and social work, manufacturing, energy, hotels and restaurants, real estate, finance and, other sectors, while FDI decreased in all the other sectors (the largest decline was observable in agriculture, transports and communication, mining, and construction sectors). The recent trends in FDI are not taken into consideration in our model yet.

Inflation
In July, the annual inflation of consumer prices amounted to 11.9%, which is notably higher than the targeted 3%. Approximately 4.1 percentage points of CPI inflation were related to higher food prices, which increased 14.1% annually (this was driven by the hike in food prices worldwide). Furthermore, increased oil prices made a notable positive contribution (2.1 ppts) to the annual inflation measure. The latter trend is mostly a reflection of significantly increased oil prices on the global market (Euro Brent Spot Price (COP) increased by 73.8% yearly). Meanwhile, the measure of core inflation amounted to 6.3%.

Due to higher annual inflation rate compared to the targeted 3% and risks of emerging inflationary expectations, National Bank of Georgia (NBG) increased Monetary Policy Rate (MPR) by 0.5 ppt in August 2021 and maintained this measure on the same level (10%) in September 2021. This had a negative impact on the annual real GDP growth. Overall, CPI related variables had a slight negative contribution to the GDP forecast.

Exchange Rate
In July, the Georgian lari real exchange rate appreciated in both yearly and monthly terms against all main trading currencies. The Real Effective Exchange Rate (REER) appreciated by 2.4% and 5.3% monthly and yearly respectively. Appreciation of the REER is typically associated with domestic export goods losing competitiveness on the foreign markets, but it also translates into less pressure on the prices of imported goods. Overall, REER-related variables had a small positive contribution to the real GDP growth projections.