Hypocrisy and Georgia’s Place in the Clashing World 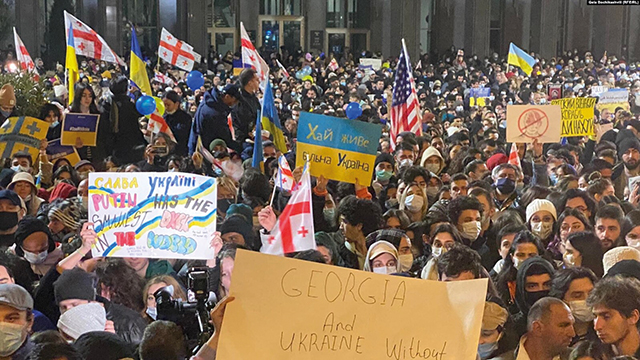 Demonstrations in support of Ukraine have taken place in Tbilisi and other Georgian cities since Russia invaded Ukraine on February 24. Source: Rferl

Georgia, today, is in the best possible spot within the world’s geopolitical labyrinth it has been in the last 30-odd years. The chain of strategic bungles this country has been through following the demise of the Soviet Union is still vibrant, effectively ramifying into other political errors. Fortunately, though, the habitual hotheadedness of our erstwhile governments has come to a long-cherished balanced end, not to mention the fact that the already learned people of Georgia know very well how to tell wrong from right, and how to discern between black and white.

And yet, as if to uphold a tradition, the political opposition here continues to maintain their never-cooling-down hot heads, operating consistently in a hysterical fashion, hoping that screaming in front of the Government House and staging histrionics on the parliament floors will bring them back to power. There is nothing wrong with a change in the country’s administration every now and then, but only for the better, not for the worse!

Georgia’s current government has made it absolutely and unyieldingly clear that Georgia will never back the sanctions against Russia. This practically means that Sakartvelo no longer wishes to take part in international conflicts, is not willing to send its young people to war, does not want to take sides, and has no desire to play geopolitical games that could very well work to its worst detriment. It is hardly comprehensible why this kind of stand is so bad that the opposition chooses to tear up its lungs in an attempt to prove the opposite and send the nation to another slaughterhouse.

We are certainly willing and obligated to help other nations in trouble, but should we not remember as well our own poverty-stricken fellow citizens, those who have help neither from the government nor their own neighbors, as we all now so eagerly send off truckloads of food and utensils beyond our borders?

I say, without a tinge of hesitation or remorse, that the life of one young Georgian that might potentially procreate other Georgian lives in the future, is much more valuable than anything else, even the fight for freedom and democracy, be it here or in any other part of the world. This country has lost so much to fighting for so many unlikely aims, that it is high time for us to come to our senses and get our acts together so as to finally give peace to our good people so they can build their lives, rather than letting them fall to destruction, as has so often happened in the past.

It is deplorable to me to hear those high-pitched oppositional voices demanding we join the international sanctions against Russia and send humanitarian aid to the suffering Ukrainian people while, here in Georgia, one can hardly find a garbage bin in town without a hungry panhandler desperately scavenging within its putrid, foul-smelling depths for a morsel to eat. Yes, we are certainly willing and obligated to help other nations in trouble, but should we not remember as well our own poverty-stricken fellow citizens, those who have help neither from the government nor their own neighbors, as we all now so eagerly send off truckloads of food and utensils to lands beyond our borders? A fair balance between the two might work well, but even mentioning this thought publicly could trigger a rush of negative emotionality in our society. So, I simply suggest we remain internationally-minded world citizens, and at the same time, avoid hypocrisy.

I could humbly and respectfully go further and deeper into my poignant comments, describing the most active shouters of support for Ukrainians in their war effort. These are the Georgian men and women opposed to our governmental stand, who call for volunteer fighters to be sent to Ukraine, but when it comes to dispatching to war their own family members, they immediately change their mendacious bellicose slogans into a tone of the blatantly pacifistic. In a word, it is so egregiously clear that the oppositional forces are viciously thirsty and ready to drag Georgia into a war just to see new electoral opportunities emerge in their favor as a result.

No, we will not go to war! We will no longer lose our youth the upholder of our national gene pool, who nourish us with hope that the Georgian nation will never be swept away from the surface of the earth. So, God be with us!