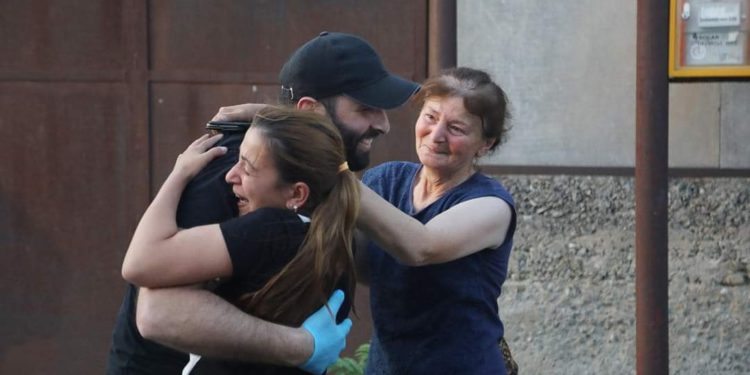 EU Ambassador to Georgia Carl Hartzell has responded to the release of Georgian citizen Zaza Gakheladze from the custody of the occupation regime, saying that illegal detentions are inadmissible.

“Good to see Zaza Gakheladze returning to his family today. Illegal detentions are inadmissible. Glad that the EU via EUMM Georgia contributed to this positive outcome, through the Hotline and IPRM meetings,” the Ambassador tweeted.

Good to see Zaza Gakheladze returning to his family today. Illegal detentions are inadmissible. Glad that the EU via @EUMMGeorgia contributed to this positive outcome, through the Hotline and IPRM meetings. https://t.co/g7ySpq4MNl

Gakheladze returned to his family after crossing the so-called border (ABL) in Ergneti on July 14. He was met by Prime Minister Irakli Garibashvili and Minister of Internal Affairs Vakhtang Gomelauri.

The Russian military detained Zaza Gakheladze, who resides in the village of Kvemo Chala, near the occupation line, on July 11, 2020, near Skhvilo Fortress in Kaspi Municipality. During the arrest, the Georgian citizen was shot in the leg.

On February 5, Tskhinvali’s “court” sentenced Zaza Gakheladze to 12 years and 6 months in prison.

In June, Gakheladze’s family members held a demonstration in Kvemo Chala. Family members had previously planned to hold a protest rally and block the road, but canceled their plans after the Georgian Patriarch, Ilia II, appealed to the Russian Patriarchate to be involved in the release of Gakheladze. Gakheladze was pardoned by so-called South Ossetian President Anatoly Bibilov.