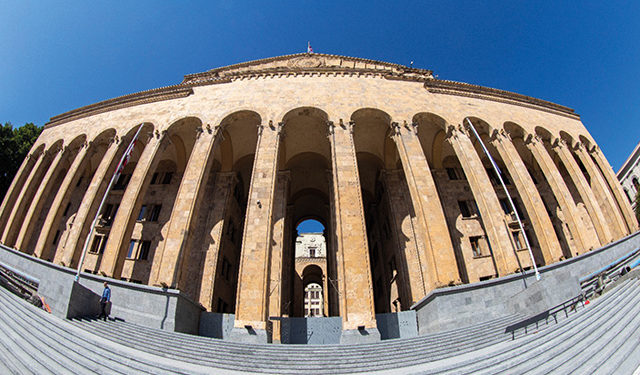 The Georgian Parliament building in Tbilisi. Photo by Leli Blagonravova/UNDP

As Georgia moved to a parliamentary system of governance in 2018, Parliament has been implementing institutional reforms to put this choice into practice. The new Rules of Procedure adopted the same year focused on improving the law-making process and strengthening oversight over government activities. One part of this transformation is appointing Members of Parliament (MPs) as committee rapporteurs on various political, social and economic issues.

To assist the Georgian Parliament to introduce this important legislative and oversight mechanism, the European Union (EU) and the United Nations Development Program (UNDP) commissioned a comparative review of the best European practices based on the examples of sixteen European parliaments, including the European Parliament and the Parliamentary Assembly of the Council of Europe.

The study was carried out by the Honorable Sarmite D. Bulte, a lawyer, an international consultant, and a former MP of the Canada House of Commons. It highlights different approaches to the role of committee rapporteurs and offers recommendations on how to empower MPs and integrate their input in the work of parliamentary committees.

Key findings of the study were discussed today, at a workshop attended by Georgian MPs, Parliament staff and representatives of civil society and international organizations. The workshop will be followed by consultations for women MPs from the ruling and opposition parties to guide them through their new responsibilities as committee rapporteurs.

“It is crucial to make full use of the mechanisms provided to the Parliament by the new Rules of Procedures,” said Parliamentary Chairperson Kakha Kuchava. “Rapporteurs will make Members of Parliament and parliamentary committees stronger, and the law-making process more informed and focused.”

“The European Union is a longstanding supporter of Georgia’s path towards a fully-fledged parliamentary democracy,” said Evija Kotan, Deputy Head of Political Section at the Delegation of the European Union to Georgia. “We will continue assisting the Parliament to enhance its role in all key areas of governance. We especially focus on strengthening parliamentary oversight and increasing citizen engagement in decision-making.”

Assistance to parliamentary reforms is part of a broader EU and UNDP support to parliamentary democracy in Georgia. A $1.8 million (up to EUR1.7 million) initiative assists the Parliament of Georgia and the Supreme Council of the Ajara Autonomous Republic to enhance their legislative and oversight roles, increase openness and transparency, and provide citizens with more opportunities to engage in decision-making.