A Private Solution to Illegal Borderization 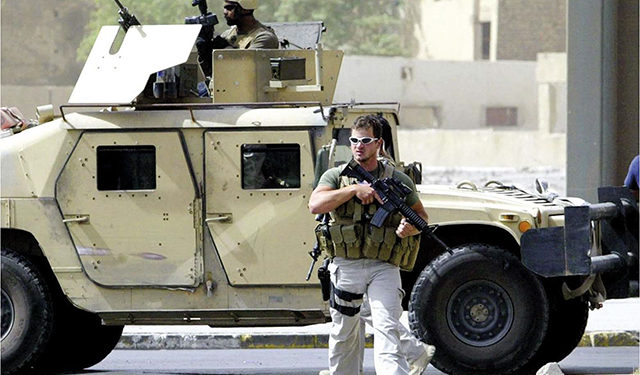 PMC company employees secure the site after a roadside bomb in Baghdad, Iraq, in September, 2007. Photo by Ahmad Al-Rubaye/ AFP

Private Military Contractor (PMC) companies have made massive waves in the wake of the recent conflicts in Iraq and Afghanistan. From logistics and administration to security and VIP protective services, these men and women have filled gaps that are critical to NATO armies in fulfilling their larger mission. The goal of securing the limit of the Russian incursion, often referred to locally as the administrative border line or ABL, is something where the EU has had limited quantifiable success.

The EU, through their European Union Monitoring Mission (EUMM), has arguably hamstrung Georgia into bowing before the Russian occupation forces. Heavy limitations on the police presence and a restriction on Georgian military actions has put the nation at a disadvantage. Russia regularly deploys their state security and military forces in the area, even harassing and abducting civilians. Placing the military along the ABL would surely draw the ire and potentially the deployment of more regular Russian forces; however, the quiet emplacement of PMCs is another matter entirely.

PMCs have long been a means with which governments have been able to augment and amplify their forces on military campaigns. Throughout history, the deployment of privatized military detachments has worked to distance the potential socio-political fallout of a situation from the government seeking a solution. Simply put, it is far more palatable for a private corporation to bear the brunt of public outcry than the government themselves.

Recently, Russia has made extensive use of this avenue. Russian private military companies, though technically illegal in Russia proper, have seen combat deployments in Georgia, Ukraine, Syria, Central Africa, Afghanistan, and even in internal conflicts in Chechnya. Allegedly, there is even use of these shadowy elements in some South American nations as a furtherance of the Kremlin’s doctrine. These companies, headed by some of Putin’s closest friends, are allowed free reign and lucrative contracts with virtually endless state resources to back them. What’s more, they are afforded the shieldwall of deniability and cover of the Kremlin, should anything go awry during operations.

Many of these companies prey on recently retired service members of the military. Returning from contract service to a small town or village with little prospects of real work, they are ripe for recruitment into the ranks of this shadow army, as, for many veterans, leaving the military and that unique lifestyle is particularly difficult. Regaining that camaraderie, regimented environment, and military culture is a natural magnet for these men.

However, unlike Western PMC companies that focus on logistic, administrative, and limited defensive use of these assets, Russia sees them as more of a covert means to an end. Deployed in areas where conventional or even special operations forces would be unlikely to go unnoticed, these PMCs are able to maneuver virtually uninhibited from media and international political scrutiny. As the proverbial question goes; if a tree falls in the forest, does it truly make a sound? If Russian mercenaries commit crimes in the Central African jungle, does it truly have any effect on the global stage?

While the press-ganged service of these unfortunate men is largely ignored, it brings into question the idea of their more legitimate use by Georgia. Georgian police and border officials have been restrained by much of the EUMM regulations. These regulations, though laid out in good faith, are a stark contrast to their neighbors to the north, who not only ignore any sanctions against them, but actively take part in continually violating national sovereignty. Some in defense and security circles have even come to question the efficacy of EU involvement in the matter entirely.

Absolving themselves from the binds of political affiliation and the related restrictions, PMC companies operate with a profit-driven model towards delivering a “product.” This product is aimed at being superior to both competitors in the private sector and their equivalent in the public sector. Given that any mishap could jeopardize their contract, and as such their business, they are vehement in ensuring that their product is flawless.

This product is territorial sovereignty.

Sourcing talent from not only the Georgian military and law enforcement communities, but also bringing in foreign veterans from Europe and the United States could build a considerable defensive force.

Operating outside the EUMM’s ineffective framework, these PMC entities would have the ability to stop and stymie any attempt to illegally disrupt the situation at the occupation line. While restraint must be exercised, something perfectly familiar to these seasoned contractors, they will be well within their natural and legal rights to use deadly force should their lives or the lives of civilians be jeopardized.

Organizing these units would not be dissimilar to that of a military unit. Due to the ease of administration, command, and control, they would largely be dispersed along occupation lines, with local management in larger villages or towns. The regional commands would be divided into a western and central command: the western command assigned the occupation line with the Abkhaz region and the central being along the ABL with Russian-occupied South Ossetia.

Under this command, an infantry regiment would be divided into several operational branches, each with their own logistics, administration, and armed security and stability contract employees. Each branch would have 3-5 armed components of a minimum 10 personnel per component, with patrol routes, a supply office, armorer, administrative officer, a public relations contingent, and a combat command office should things along the occupation line become particularly “complicated.”

It must be asserted that these private elements are not an end-all to the matter of borderization. Rather, they are a buffer element between the occupation and invasion force and the might of the Georgian military. In optimal conditions, they will also facilitate the deployment of NATO forces. While silence in private-public matters is widely viewed as horrific, should a Russian military occupation member disappear from his post or fail to return from his post, as stated, would this make a sound on the world stage? Perhaps only when their members go missing would further deployment of special Russian FSB, GRU, and other military/paramilitary teams be reconsidered.

Armed employees, certified and licensed with the weapon systems they are assigned, would be deployed along the occupation line. As with any sensitive position, these employees would be vetted and certified to be of sound mind and sound body for the applicable assignment. With many of them drawing from the military and law enforcement fields, this is hardly a difficult task.

Kit and equipment, particular to the individual, may be both partially provided and personally procured, as many in the aforementioned communities desire their own configuration.

Positioned in both static positions as well as mobile patrols, they would be similar in style to the current EUMM patrols, though far more effective. In addition to their special weapons license, they would also be granted special powers of arrest and authority with a carefully defined scope. In an attempt to limit any potential for corruption or abuse of authority due to complacency, every armed contractor would be limited to a maximum of 3 years’ service, or they will otherwise be reassigned an unarmed logistical, administrative, or management role. Any apprehension of offending individuals would be summarily processed and passed on to the Georgian Ministry of Internal Affairs for incarceration and subsequent prosecution.

The individual expense for these contractors would be minimal, the payroll being reduced due to the lower cost of living in Georgia compared with that of Europe and the United States. Supply and materials would be the majority of the overhead costs for the PMC company or companies conducting this operation. In a further measure to reduce budgetary concerns, meals and lodging can be afforded by the military. Amalgamation of the ancillary services between the Georgian army and these private security services would not only serve to alleviate many of the issues with upkeep of such a force, but also possibly forge a cohesive bond between the two entities that may pay dividends in any future conflict.

Along with special liaison offices for government relations, they would be able to procure much of the needed materials from local vendors through a blind bidding process, encouraging and growing the local business environment. In addition, the potential for foreign investment in this Georgian PMC company could draw even more growth for the nation’s economy.

However, it is expected that the EU, particularly the EUMM themselves, will provide a spirited rebuttal to this proposal. Being an overly cautious-minded organization, they would most likely shriek at the thought of an armed privatized solution to a job that they have routinely failed to do. Much like any manufacturer of an inferior product, the producer of the inferior product will strive to destroy not only the product, but also the reputation of the manufacturer of the superior item. Despite their expected disapproval, and in much the same dismissive fashion as the Russians, the Georgian government must employ these services to halt the ever expanding occupation.

Other detractors may point to a more legally founded basis for their opposition. Under Chapter VI, Article 22, of the Law of Georgia on Private Security Activities, the use of some security actions may be prohibited if in violation of certain international conventions. It could be argued that the potential of PMC employee defensive actions may degrade the situation along the occupation line. Despite this, much of the other provisions under this legislation reinforce the lawful right of these security contractors to act in good faith and in defense of the innocent.

The Russian puppets in Tskhinvali and Putin’s circles in Moscow will also undoubtedly voice their objection to this project. Despite their repeated use of illegal mercenary groups in various warzones, they cannot stand anything of more legal flavor being used against them. Any statement by the Kremlin should be met with nothing more than a brief laugh and a quick dismissal. They are worth nothing more.

There comes a point where only so much ground can be given. While many may debate what duties truly lie in the government purview, one that is unarguable is the duty to ensure territorial sovereignty and the safety of the people. The EU has talked highly of the right to this sovereignty, but done very little to enforce this right. It is well within the natural, God-given, and legal right for the Georgian leadership to seek appropriate measures to fight this proverbial fire with like fire.

The Kremlin, and Putin more specifically, rarely react to anything other than raw strength and classical machismo. Only with this style of response will there ever be any chance of restoring the rightful lands of the united Georgian peoples, regardless of their local cultural affiliations and minor differences. A few scoffs and eyes rolled in Brussels and Moscow are more than worth the opportunity to reform the nation and defend the Jewel of the Caucasus.