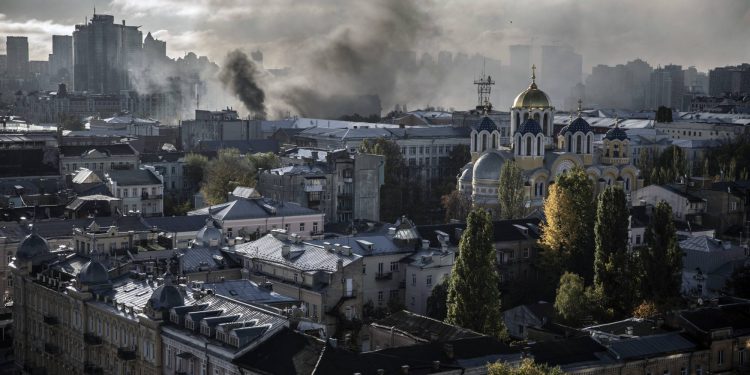 Volodymyr Zelensky, the President of Ukraine, claimed on Monday that a series of lethal strikes by Russia employed drones and missiles built in Iran to target civilians and Ukraine’s energy infrastructure.

The attacks happened the day after the leader of Russia attributed an explosion on the crucial Crimean bridge to Ukraine.

“This morning is difficult. We are dealing with terrorists. Dozens of missiles and Iranian Shaheds. They have two targets. Energy facilities throughout the country, ” Zelensky declared in a video speech posted on social media. “The second target is people,” he underlined.

The Ukrainian military claimed Belarus was the launch location for the Iranian drones.

The Ukrainian military said in a statement on Facebook that “the enemy used Iranian Shahed-136 UAVs in strikes launched from the territory of Belarus” and the Crimean peninsula taken by Russia, adding that nine drones were “destroyed.”

“The terrorist country, Russia, has carried out massive missile and air strikes on the territory of Ukraine, also using attack drones. In the morning, the aggressor launched 75 missiles. 41 of them were shot down by our air defense,” General Valeriy Zaluzhny wrote on social media.

Iran has denied giving Russia drones. Last Monday, Nasser Kanaani, a spokesman for the Iranian foreign ministry, called media claims “baseless.” US National Security Advisor Jake Sullivan asserted in July that Iran had consented to provide drones to Russia, despite repeated warnings from officials. The US imposed penalties on a number of businesses in September for aiding or allowing drone exports to Russia.

Zelensky pleaded with the G7 leaders to provide medium and long range air defense and missile defense systems, noting that such systems would create a layered defense system, when speaking via video link at the emergency G7 summit.

At the G7 meeting, he thanked the nations that had already contributed air defense systems, saying that they had made it possible to “neutralize some of the Russian missiles and drones. But Russia has ordered 2,400 Shaheds in Iran alone, according to our intelligence.”