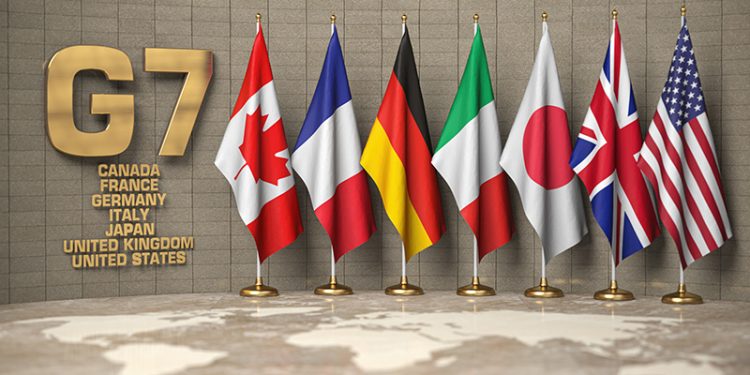 G7 summit or meeting concept. Row from flags of members of G7 group of seven and list of countries, 3d illustration

The G7 urgent meeting follows Vladimir Putin’s illegitimate takeover of four Ukrainian regions and his deadly attack on citizens in Kyiv and other regions.

Volodymyr Zelensky, the president of Ukraine, stated in a phone chat with Olaf Scholz that they decided to have an urgent meeting given Germany holds the G7 leadership as of January 1, 2022.

“My speech is scheduled, in which I’ll tell about the terrorist attacks by RF [Russia]. We also discussed the issue of increasing pressure on RF & aid in restoring damaged infrastructure,” Zelensky tweeted.

Tuesday, October 11, the G7 leaders will meet to reaffirm their shared opposition to Putin’s ongoing violence in Ukraine.

The G7 leaders, who will convene digitally on Tuesday, are also likely to debate the adoption of a global ceiling on the price of Russian oil as well as the escalating global energy crisis.

British Prime Minister Liz Truss will use the gathering to persuade the other G7 members to keep their harsh sanctions on Russia in place and to push for further security aid for Ukraine.

In order to ensure that allies stay steadfast in their opposition to Putin’s actions, the Prime Minister is also urging an immediate summit of NATO leaders.

“The overwhelming international support for Ukraine’s struggle stands in stark opposition to the isolation of Russia on the international stage. Their bravery in the face of the most brutal acts of violence has earned the people of Ukraine global admiration,” Truss is expected to say.