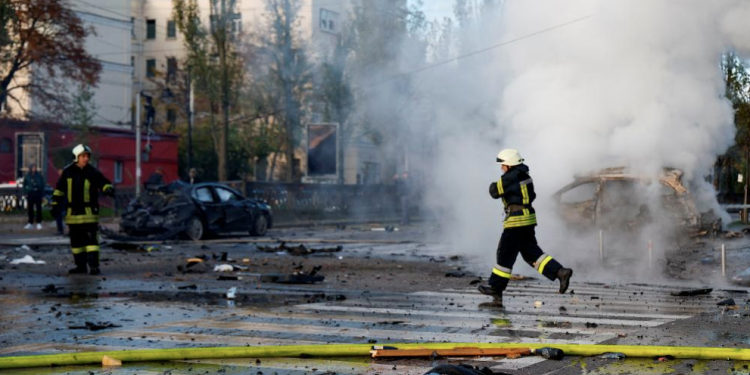 Huge explosions rattled the Ukrainian capital and other cities during the early morning rush hour on Monday, in suspected Russian retaliation for President Vladimir Putin’s declaration of a terrorist attack on the Crimean bridge.

Since June 26, this is the first time Ukraine’s capital has been attacked.

Regional officials and local media sources indicate that a number of explosions have shaken the Ukrainian capital of Kyiv.

The advisor to Ukraine’s Interior Minister stated eight civilians were killed and 24 were injured as a consequence of missile attacks on Kyiv this morning. Six automobiles caught fire as a result of the attack, and over 15 vehicles were damaged, according to Rostyslav Smyrnov’s Facebook post. He noted that 30 emergency personnel and six reaction units were dispatched to the site in Kyiv’s Shevchenkivskyy neighborhood.

Social media images and videos show smoke billowing above buildings in several districts of Kyiv. The explosions look to be considerably more central than prior Russian assaults on the city.

Vitaliy Klitschko, the Mayor of Kyiv, published a statement just after 8.30 a.m. local time through his official Telegram account, saying: “Several explosions in the Shevchenkiv district – in the center of the capital. All services follow in place. Details later.”

Ukraine’s President Volodymyr Zelensky delivered a statement in reaction to a series of assaults on Ukrainian cities this morning.

“They are trying to destroy us and wipe us off the face of the earth. Destroy our people who are sleeping at home in Zaporizhzhia. Kill people who go to work in Dnipro and Kyiv. The air alarm does not subside throughout Ukraine. There are missiles hitting. Unfortunately, there are dead and wounded. Please do not leave shelters. Take care of yourself and your loved ones. Let’s hold on and be strong,” stated Zelensky.

Ukraine’s Defense Minister, Oleksii Reznikov, has stated that his country’s “courage will never be destroyed by terrorist’s missiles, even when they hit the heart of our capital.”

Our courage will never be destroyed by terrorist's missiles, even when they hit the heart of our capital. Nor will they shake the determination of our allies. The only thing they demolish irriversibly is the future of 🇷🇺 – a future of a globally despised rogue terrorist state.

The explosions came only two days after a vital bridge connecting Crimea to Russia was destroyed. Although Ukraine did not claim credit for the strike, many authorities hailed it as a devastating blow to Russian President Vladimir Putin.

Bastrykin claimed that the Main Directorate of Investigations and crime and forensic specialists launched an inquiry in line with section 2 of Article 205 “Terrorism.”

“It is obviously of a terrorist nature. It is an act of terrorism. All our preliminary investigation data allow us to come to an unequivocal conclusion – this was a terrorist act which had been prepared by Ukrainian special services with the aim of destroying a large civilian infrastructure facility of crucial importance to the Russian Federation, especially to Crimea,” stated Bastrykin.

💬 President #Putin on the explosion at the #CrimeanBridge:

There is no doubt we're dealing with an act of terror, aimed at the destruction of Russia's critical civilian infrastructure.

The President of Russia stated, “There is no doubt here, as you have just reported, that it was a terrorist act aimed at destroying critical civilian infrastructure of the Russian Federation.”