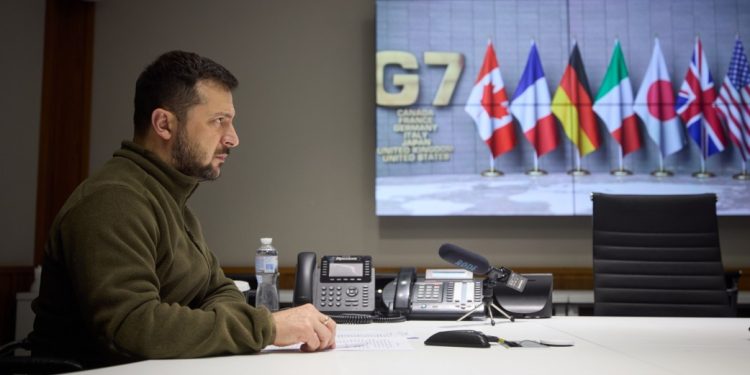 Volodymyr Zelensky, the President of Ukraine, has pleaded with G7 leaders in an emergency meeting to establish an aerial shield to thwart Russian strikes that have wreaked havoc on his nation.

A day after missiles rained down on cities all around Ukraine, Zelensky urged G7 leaders to provide Ukraine with an “air shield” to thwart Russia at a virtual meeting on Tuesday.

“I am asking you to strengthen the overall effort to help financially with the creation of an air shield for Ukraine. Millions of people will be grateful to the Group of Seven for such assistance.”

He warned that Russian President Vladimir Putin “still has room for further escalation” in his video speech.

The G7 nations of Canada, France, Germany, Italy, Japan, the United Kingdom, and the United States promised to continue providing Ukraine with “financial, humanitarian, military, diplomatic, and legal support… for as long as it takes” in a joint statement issued at the conclusion of the conference.

They reaffirmed the fact that attacks against civilians are war crimes and vowed to “hold President Putin and those responsible to account.”

The G7 condemned Russia’s “deliberate escalatory steps,” including “irresponsible nuclear rhetoric” and “partial mobilization of reservists,” which were endangering “global peace and security.”  “We reaffirm that any use of chemical, biological or nuclear weapons by Russia would be met with severe consequences.”