You Scratch My Back, I’ll Scratch Yours 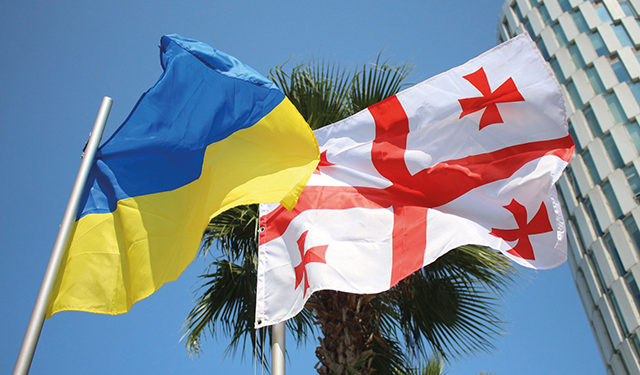 Says Volodymyr Zelensky: ‘I am grateful to those countries that stand by Ukraine in word, declaration, and assistance, but I will refrain from mentioning them by name, so that other nations need not feel embarrassed.’ Should these words of the incumbent Ukrainian president, proclaimed with pained emotion and a tinge of generalized rebuke, be interpreted as aimed at instigating a certain sense of guilt in us Georgians, Ukraine’s strategic and trade partners, cooperating with each other for mutual benefit since the very first day of the soviet demise?

The most honest, straightforward and unequivocal answer to this awakening question is of course, no. And here goes the corroboration of the negation, with no pang of national conscience, surest proof of our evenhandedness, something which the fairest among the Georgian evaluators of the Georgian-Ukrainian love affair would throw in as an argument: genuine friends don’t usually befriend the enemies of their friends.

The story has it that a huge bunch of the Georgian civil servants from Saakashvili’s term in office, including the president himself, were indicted for criminal activity against the state, and sentenced accordingly, although not duly imprisoned as proven convicts because of their elusive absence in the country of their origin. Most of the mentioned bunch, notably, have since acquired Ukrainian citizenship and were happily employed in various segments of the Ukrainian governmental service, assisting the young corrupt republic to become more democratic and better tailored to a European model of statehood, seemingly utilizing the expertise of reforms that took place in Georgia in its recent ‘glorious’ past. Some of the vacancies filled by these ‘legendary’ young Georgian reformers in the Ukrainian system of management, mostly skillful PR experts (that being the forte of the erstwhile Georgian rulers), found themselves in key governmental positions with highly influential strings to pull and a lot of fringe benefits providing for their high-quality lifestyles. These people were given responsible jobs by the Ukrainian high authorities with absolute awareness of what they were doing.

Just imagine, the cadres persecuted by the Georgian legal system now feel as snug as bugs in a rug in their newly proffered Ukrainian nursery, that country so warmly and honorably treating the former Georgian governmental personnel, despite their criminal status in the eyes of the Georgian legislation.

Moreover, it is not just a makeshift measure to temporarily keep those Georgian men and women alive, but a very solid way of life and a chance for them to be employed forever in their new motherland.

What kind of friendship and strategic partnership is one that allows your opponent to act to your detriment? The social and political morality of such a relationship between the two countries can trigger a lot misgiving, and begets questions that are hardly answerable with clear conscience. The bottom-line of the entire chronicle is that Georgia and Ukraine cannot afford even a tinge of deteriorated relations due merely to the latter’s having given shelter to those written-off Georgian politicians, even if they seem to be useful somehow, a fact which needs regular checking so as not to cause any inadvertent harm.

Georgia and Ukraine are two considerable states, fiercely struggling for a brighter future, and that struggle of ours is comparable in numerous respects. How very, very true that I would never want to scratch your back unless you are prepared to scratch mine. A propos, Georgia has already come up with an extremely relevant-for-the-moment declaration on support to Ukraine at this hard time of its military conflict with Russia. Said declaration reflects every possible point that had to be put forward so that the wolf is full and the goat is whole. And such a cautious attitude is the result of the state-like thinking of this Georgian administration, because we have our own national interests that need to be kept up and followed. For who will be the judges if Georgia bungles it up again? Who will help us if we commit a blunder for the umpteenth time in history on the rough and thorny international terrain?