Why Ukraine, Why Now 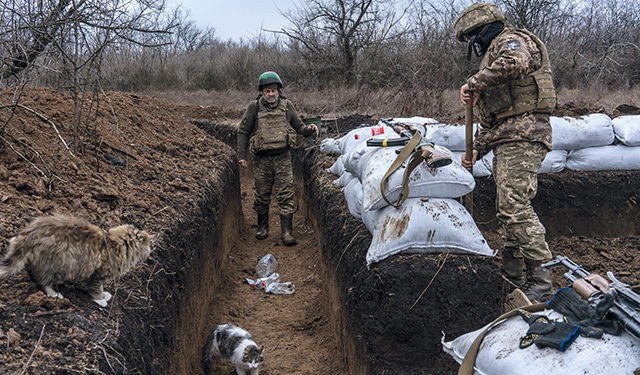 Recent months have seen unusually coordinated diplomatic and military moves aimed at testing Kyiv’s resolve for self-defense, and the collective West’s willingness to support Ukraine’s sovereignty. Indeed, tens of thousands of Russian troops have amassed along Ukraine’s border in what is the biggest concentration of forces in Europe since end of the Cold War.

The Western reactions betray fears and concerns, as, behind the military moves, Russia exacerbates its diplomatic rhetoric and makes a series of demands to obtain written guarantees from NATO on non-expansion of the military alliance along Russian borders. While the demands have been shunned, their unprecedented nature indicates that Moscow is serious about settling its “Ukraine problem” at this particular juncture of time.

What makes the present conditions different from earlier Russian military moves and diplomatic demands is both the evolving balance of power in Russia’s immediate neighborhood and global geopolitical trends which favor Moscow’s position.

But first, it needs to be emphasized that for Russia, Ukraine is increasingly seen as unfinished business on its path to reasserting its position on what crudely corresponds to the territory of the former Soviet Union. Arguments that Moscow is trying to resurrect the defunct empire are surely oversimplification, but what the Kremlin does indeed seek is to maintain the military perimeter it enjoyed in the Soviet period.

Recent tensions around Ukraine also show that although there were attempts within the Russian analytical community to downplay the country’s importance to Russia, Ukraine’s significance rather increased. Moscow needs at least a neutral Ukraine as the world enters a protracted era of great power competition. In order to secure a respectable place in the emerging multi-polar world, Russia needs much more than just a successful military operation in Syria or growth of its influence in Nagorno-Karabakh.

Ukraine’s territorial size, population, economic potential and most of all geographic position (it provides a necessary buffer to Russia), place it squarely within Russia’s imagined geopolitical sphere of influence.

There is also a deeply personal influence when it comes to Russia’s dealing with Ukraine. Putin has witnessed many defeats in Ukraine since the early 2000s. Moreover, for Putin, Ukraine is an inseparable part of the Slavic heartland and is the historic birthplace of the first Rus state, which calls upon him a mission to accomplish – re-establish Russian influence. Those who believed that Russia got most of what it wanted in 2014 by annexing Crimea and instigating separatism in Donbas, miss the bigger picture.

It is indeed personal, as seen in the scathing articles published by Putin and the former president Dimitry Medvedev, where a sense of urgency to find a solution to the “Ukraine problem” is palpable. Medvedev even argued that there is no point negotiating with the government in Kyiv. To this should be added Putin’s recent comment that the end of the Soviet Union disintegrated historic Russia. The rhetoric thus sets the scene for what to expect. Russia argues it has a legitimate right to act freely along its borders. It is essentially an argument for spheres of influence.

Ukraine does not worry the Russian leadership because the country is not Georgia or Moldova, whose potentially successful democratic development is unlikely to serve as a raw model for Russians to follow: Moscow simply fears that Ukraine is steadily turning into a more organized state with a functioning military and rather more agile economy than before 2014. Yet, while Crimea and Donbas undermine Ukraine’s ability to become a NATO/EU member state, Moscow also sees that there is growing military and economic cooperation with the West.

Thus, for Putin, it is time to correct Russia’s increasingly deteriorating position in Ukraine. And a certain momentum is in Moscow’s hands: Putin has settled the Belarus problems, at least for now – the country is increasingly dependent on Russia, thus killing off any remnants of/attempts at the diversified foreign policy Minsk tried to pursue prior to 2020. Turning against Ukraine at this exact moment makes sense.

Now a wider, Eurasian picture to see the momentum behind Putin’s moves: The China-US competition and the resulting recalibration of Washington’s foreign policy away from the parts of western Eurasia to the Indo-Pacific region makes America less willing to commit militarily in geopolitical sensitive territories.

The wider Black Sea region could be yet another such region. And Putin is testing this possibility. He is also gambling that the US will be unable to grapple with two-front tensions around Ukraine and Taiwan, and that eventually Washington will have to make a concession to Moscow. It is smart thinking, but it completely negates the agency of Ukraine’s nearly 40-million population. It also takes for granted the Chinese position. Beijing might not be entirely willing to follow this geopolitical logic.

Thus, it is naïve to believe Russia is content with the existing status quo in Ukraine. All indicates the opposite. Russia is likely to ramp up pressure on its Western neighbor even if present tensions are settled. The real question, though, is whether Washington is ready to commit to Ukraine’s defense. Biden argued that no military moves will be made in the case of a frontal attack from Russia, which signals that Washington does not see Ukraine as part of its defense perimeter.

Against all these arguments of refusing to commit militarily, sending significant lethal arms to Ukraine offers some strength. Yet, while limited Western military support does little to influence Moscow’s decision regarding potential military action, this limited aid is used in Moscow to explain why Ukraine is considered a threat. Thus, if the present limited aid irritates Moscow but is also not enough to defend Ukraine, further help will be needed. It is this dilemma Washington will face in the long run.