Who Knows the Truth about the War? 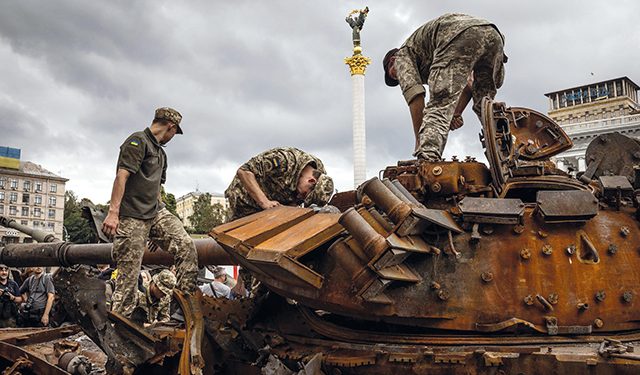 There are two things that liken wars to one another, whether they took place in ancient times or are happening now: they kill innocent people and the sides blatantly lie in their own favor about developments on the battlefield.

The Russian-Ukrainian military conflict continues raging, and the entire world is watching it with action-movie interest, although hardly anybody on this planet knows for sure who is winning and who is losing.

If you listen to the Ukrainian wartime media, you will hear that the heroic Ukrainian people, with their even more heroic militant and sharply PR-conscious president, are to prevail so much that, having kicked the aggressors out of their occupied lands, the war crimes of the ashamed and repentant invaders will be punished as the gleeful world enjoys the bowed-in-embarrassment Russian heads.

If you heed the Russian propaganda machine, you will hear how gutless and stupid the Ukrainians are, and how successfully the invincible Russian armed forces are cleansing the sacred Ukrainian lands from violent fascist influence and an unlawfully armed belligerent bunch of hoodlums and killers.

In compliance with this model of disseminating info, both are righteous in their confrontational action, both are winners, and both will celebrate victory before long. Yes, the irrefutable fact is that both sides need to keep the world misinformed and have it on their side. This is not the mission per se, of course, but it is definitely one of the tools for achieving the ultimate goal. How come? And why does this make sense in our overly transparent contemporary world?

The likely impact of the often unfounded optimism, artificially and deliberately imposed on us readers and listeners, in the war news, is so significant in terms of eventual success that misinforming the public has acquired value. Hence the increasingly obvious predilection of media of the respective sides to tell the client what the client wants to hear, using sophisticated modern information technology, plus the on-the-spot worldwide effect of social networks on human hearts and minds.

It is simply incredible that a regular user of information has no way to know the truth about the situation on the front, making it sheer guesswork. Having delved into the sea of information in pursuit of the truth, you have to be a skilled reader between the lines and an owner of a lot of leisure time to be able to come to some kind of conclusion. Often, though, it is beyond a rank-and-file war watcher’s ability to deduce unerringly what the actual developments are. Liars, egregious liars – that’s what all of them are!

One might even be driven to the point where the war itself loses its image as the terminator of thousands of human lives, turning all of us into zombies with the crippled imagination of cyber-warfare victims, and this is what gradually acquires a fundamental social role in our lives. The only qualification that one could give to this kind of situation is informative control over the conflict. This is why there are hundreds of narratives out there about the actual war. All evaluations, even the expert ones, are dubious. None can be trusted, because the style of issuing the info is rife, and leaves a lot to be desired in its genuineness.

It is cruel that we have become so deprived of an opportunity to make fair and relevant judgments. I have never seen so many shrugged shoulders and confused countenances than in the discussion of this weird war between two blood brothers. The most nerve-wrecking player is social media. Better not comb through it for war news and opinions, because that’s exactly where the human imagination tears its bridles and begets blunder in a componential manner, which is beyond a normal person’s ability to cope with. So, what’s next? Nothing much! Let’s just wait for the end of the damn thing, then and only then might we understand something, one way or the other.