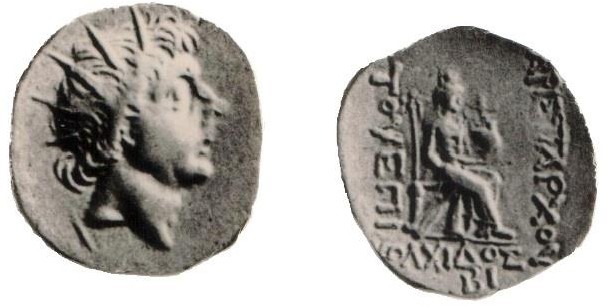 Democracy building in Georgia is strongly supported by the West. It involves mediation in times of crisis. Presently Georgia has been through some rough time. Internal instability following the 2020 parliamentary elections shed light on the need of external mediation. The West as a natural ally has been actively involved in the process. Significant progress was achieved, albeit inconclusive. The Western involvement in Georgian internal political affairs has a long history starting from Antiquity.

For the republics in Classical Antiquity, there were the gods to justify a legitimacy of a coin. With the decay towards autocracy, the first persons started to be portrayed.

Julius Caesar became the first living individual to be portrayed in Rome, and it was done by a special senatorial decree (Chr. Howgego. Ancient History from Coins. London and New York. 1995, pp. 67-69).

Was he really the first Roman to be honored this way?

The case of Flamininus with his head on the gold coins struck in Greece is beyond the interest. It happened too long before and the republic was too strong.

But what about Gnaeus Pompejus; that is exactly him on obverse of the light drachm struck in Colchis (Western Georgia) in 52/51 B.C.

Aristarchus, dynast from Colchis, was part of Pompejus’ Eastern reorganization after the Mithridatic Wars (first half of the 1st c. B.C.). He is put in charge of Colchis in 63 B.C. (App. Mithr. 114). This coin is his legislation and the regnal years – 12 (52/51 B.C.) – are also his. Furthermore, he  is a client of Pompejus. So, the drachm stands outside the Roman numismatics and the Roman conjuncture generally, but only de facto. What is the position of Aristarchus? He is  a viceroy. As there was no king  in Colchis by the time, the only answer is that he acted as viceroy of the  Roman Republic. What could have been an immediate reaction of the senate to Pompejus shown as rex et deus, king and  god?

Who designed the coin – Aristarchus himself, completely ignorant about the democratic principles, or there was a prompt stipulation from the outside?!

Caesar tested public opinion by staging the scene with himself being offered a diadem. The sign of total disappointment was indeed a bad omen and he demonstratively rejected the offer (Plut. Caes. 61).

Was Pompejus doing the same a bit earlier – checking the general political sympathies by making his client to act this way? Could be; with M. Licinius Crassus dead, and Caesar in Gaul making his name, Pompejus was the only prominent figure in Rome. After all, he was an illustrious and ambitious general.