We Build Bridges between Countries – Israeli Week in Georgia

Georgia is hosting ‘Israeli Week.’ The series of events started with the Israeli delegation visiting the ‘Georgian Schindler’s Park’ a memorial opened in Tbilisi this year, on the initiative of ‘Israeli House’ and with the support of the City Assembly. The location has already become a real tourist attraction in the last several months.

Israeli Week is held under the motto “We build bridges between countries”. The organizers of the event are the Israel-Georgia Chamber of Business and Israeli House. This year the theme of Israeli Week is business, culture, public diplomacy and international activities.

Almost half of the 100 members of the Israeli delegation are women who are interested in business and gender issues in Georgia. Within the Israeli Week, a meeting with Nino Tsilosani, the Chairperson of the Parliament Parliamentary Gender Equality Council, is planned. The head of the women’s organization from Israel, Heli Friedman, believes that the active involvement of women in business and politics is the harbinger of peace and progress. One of the honorary members of the delegation is Gidi Meir, the grandson of the legendary Prime Minister, Golda Meir, the “Iron Lady of Israel”.

Israeli business groups include large and leading conglomerates, such as the Carasso, Radco, and the head of Bloomberg Israel, who is a woman.

The delegation is headed by David Bitan, head of the Israel-Georgia Friendship Group in the Knesset, the Georgian counterpart of which in the Parliament of Georgia, headed by Givi Mikanadze, supports the broadening of bilateral relations. In Georgia, one of the meetings will be attended by Israeli Ambassador, Hadas Meitzad, and at different meetings, international business organization ICC, and representatives from governmental economic group, will greet the participants.

At a related business forum, The Tsalka Business Forum, successful projects will be presented, the potential of the regions will be introduced, and future projects in Adjara, Tsalka and grandiose plans in Kakheti will be announced. ORBI, a company from Batumi, will represent successful corporation with Israel, and a Wyndham representative will cooperate with Israeli investors on new projects. The participants of the forum will receive the support of the Georgian government for investment projects and overcoming bureaucratic barriers. 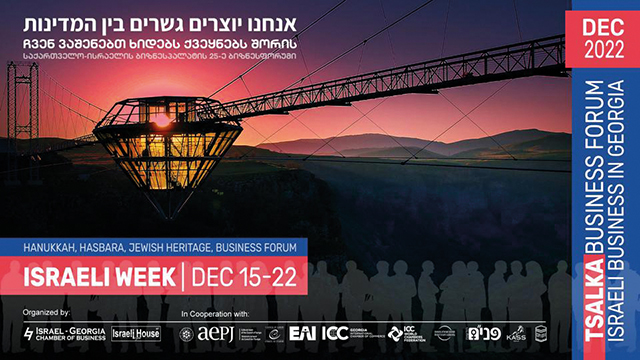 The conversation in the field of tourism will concern the successes of 2022, as well as the launch of the Biblical Route, in 2023, created by Israeli House, in cooperation with the European Association for the Preservation and Promotion of Jewish Culture and Heritage (AEPJ) agreed with the Council of Europe.

The event participants will enjoy Israeli music performed by Georgian and Israeli musicians, among whom will be Mattan Klein.

According to Itsik Moshe, organizer of the Israeli Week and the Chairman of Israeli House and Chamber of Business, it is rare for 100 businessmen to leave the country together. The aim of the visit is to get to know Georgia’s potential. Up to 20 personal meetings are already planned, and in 2023 other regions will receive special attention.

“Relationships are strengthened only through activities, and this is the 25th such business forum. The Israel-Georgia Chamber of Business has become a central bridge of economic relations between Israel and Georgia these past decades,” Moshe notes.

Israel Week, business meetings and Georgia’s potential will be covered by Israeli media.

As per tradition, Israeli House and the Chamber of Business are holding this event during Hanukkah. This time, too, the first candle of Hanukkah will be lit with the participation of Georgia’s Israeli guests.