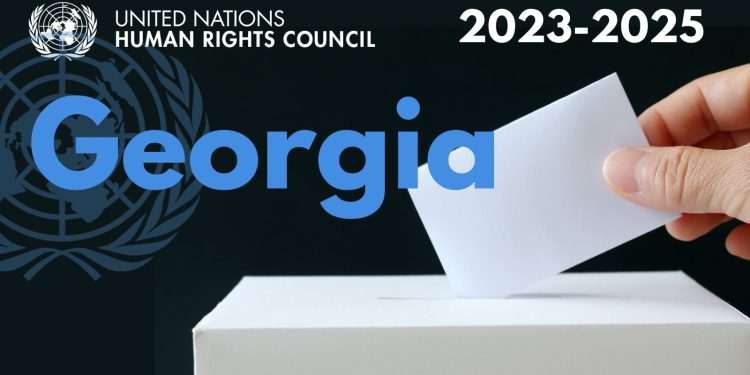 Georgia was chosen, along with thirteen other nations, by the UN General Assembly, on October 11, to serve on the UN Human Rights Council for the years 2023–2025.

The 47 states that comprise the council are chosen from regional groups in accordance with the geographical principle, and its members are in charge of advancing and defending human rights all over the world.

For the term spanning the years 2016–2018, Georgia was initially chosen as a member of the UN’s intergovernmental body in 2015.

Along with Georgia, candidates for the Council were also presented by Algeria, Morocco, South Africa, Sudan, Afghanistan, Bangladesh, Bangladesh, Kyrgyzstan, Maldives, South Korea, Vietnam, Romania, Chile, Costa Rica, Venezuela, Belgium, and Germany. Except for Afghanistan and Venezuela, all of the nations that had filed their candidacy were elected.

The @UN🇺🇳 General Assembly has elected 14 members of the #HumanRights Council for the term 2023-2025 ➡️https://t.co/TAZ7ROnFhk

“Honored that Georgia has been elected with 178 votes to the UN Human Rights Council for the term 2023-2025,” the Minister of Foreign Affairs of Georgia, Ilia Darchiashvili tweeted in response to the decision.

He underlined, “Grateful to UN Member states for their support. Look forward to working with all stakeholders to reaffirm our commitment and contribute to global efforts to protect and promote human rights.”

Honored that #Georgia has been elected with 178 votes to @UN_HRC for the term 2023-2025. Grateful to UN Member States for their support. Look forward to working with all stakeholders to reaffirm our commitment & contribute to global efforts to protect & promote human rights

Sabine Machl, the UN Resident Coordinator in Georgia, congratulated Georgia on being elected to the Council. She also emphasized that it is an “excellent opportunity to contribute to the protection of human rights globally by setting an example domestically.”

Congratulations to #Georgia for election to the UN Human Rights Council (@UN_HRC)! Excellent opportunity to contribute to protection of human rights globally by setting example domestically.