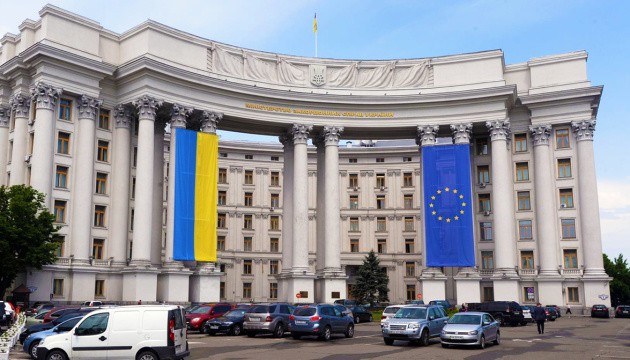 Ukrainian MFA releases a statement saying that the Ministry has noted the information regarding Russia canceling part of trade sanctions against Georgia. Ukraine’s MFA says they believe the promotion of trade relations with Russia, whose armed forces are attacking peaceful Ukrainian cities with missiles and bombs, killing innocent civilians, including children, to be unacceptable in the strongest terms.

“Ukraine has noted the information regarding the cancellation of part of the Russian Federation’s trade sanctions against Georgia.

“It is underscored that the Russian Federation approved this decision against the backdrop of the Georgian authorities’ disinclination to support the new sanctions of the European Union against Russia.

“We believe the promotion of trade relations with Russia, whose armed forces are attacking peaceful Ukrainian cities with missiles and bombs, killing innocent civilians, including children, to be unacceptable in the strongest terms.

“We call on the official Tbilisi to distance itself publicly from the decision of the Russian Federation, whose leadership is violating international law and perpetrating war crimes in Ukraine.

“The conduct of business with Russian companies provides Russia with additional resources to continue its atrocious war on Ukraine, and the profit thus earned is soaked in the blood of the murdered Ukrainian citizens.

“Due to the 2008 Russian armed aggression against Georgia, the Georgian people, unfortunately, are well aware of the horrors of war that Ukrainians are forced to go through now. At the same time, it appears that the Georgian authorities must have forgotten all that and are now trying to seize the moment to cater for their own interests,” reads the statement.

David Arakhamia, chairman of the Servant of the People faction in the Verkhovna Rada of Ukraine has also released a video address regarding the lifting of economic sanctions on Georgian milk and wine by Russia, asking the citizens of Georgia to clarify this issue with the government.

“I am Georgian and I want to remind all Georgians that when Russia treacherously attacked Georgia, Ukraine immediately, without considering its economic loss, showed all necessary support to Georgia – provided arms, helped with military instructors, to stand with a friendly, brotherly nation. In your opinion, now that Russia has already attacked Ukraine, has Georgia responded properly to Ukraine? Please, Georgian people, I believe in you – clarify with your government, resolve this issue, because we would not want to see such a betrayal from the Georgian people. I have always been proud to be Georgian while living in Ukraine and being in power here. I am really ashamed today,” said David Arakhamia.

As the agency explained, negotiations on the export of Georgian animal products with several countries, including Russia, have been underway since 2020.

It is noteworthy that certain Georgian companies, including one of the biggest producers of dairy products Sante, refused to export their products to the Russian market.