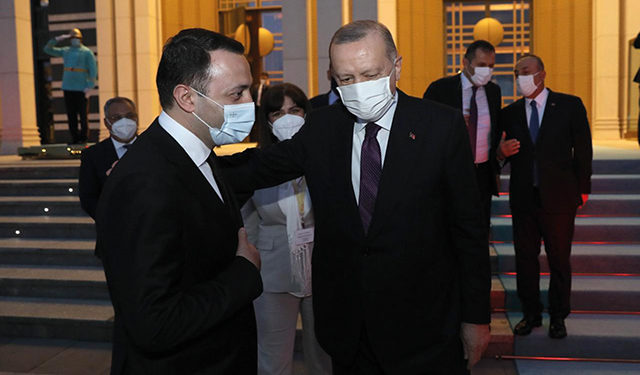 On June 3, Georgian Prime Minister Irakli Garibashvili met with Denys Shmyhal, Prime Minister of Ukraine, during the latter’s two-day visit to Georgia. The face-to-face meeting at the Administration of the Georgian Government saw the two emphasizing the special friendship and strategic partnership between the two countries.

The parties discussed the situation in the Black Sea Region and regional security, underlining the Georgian side’s position on its commitment to a peaceful conflict resolution policy. The PM of Georgia thanked his Ukrainian counterpart for strongly supporting Georgia’s sovereignty and territorial integrity.
The meeting also revolved around threats from Russia and the dire consequences of occupation, a challenge shared by both Georgia and Ukraine. Garibashvili expressed deep concern over Russia’s military buildup on Ukraine’s borders and its temporary occupation of Crimea. He reassured his Ukrainian colleague of his firm support for Ukraine’s sovereignty and territorial integrity.

“Both countries are very motivated to become full members of NATO very soon,” the Georgian PM told journalists after his meeting with Denys Shmyhal.

“One of the main topics of our meeting was our aspiration to the European Union. Of course, both countries are clearly established to become members of the EU, and we, naturally, have talked a lot about it.

“On May 17 this year, Georgia, Ukraine, and Moldova signed a memorandum on the establishment of the ‘Associated Trio,’ which is a very important political statement. We also discussed the integration of Georgia and Ukraine into NATO. Both countries are very motivated to become full members of NATO very soon.

“At the Bucharest Summit, the allies decided that Georgia and Ukraine would become members of NATO, and, over the years, our countries have made significant progress on this path,” he said.
In turn, PM Denys Shmyhal noted that the relations between the Georgian and Ukrainian peoples are gaining momentum and this is a very important signal for the businesses and citizens of these two countries.

“I am convinced that our countries’ accession to the European Union and NATO is only a matter of time. For our part, the governments of Georgia and Ukraine are doing everything possible to meet the necessary criteria,” he said.

Following the face-to-face meeting of the two PMs, the two countries’ delegations engaged in broader-format talks. The parties discussed key issues in the bilateral relations between Georgia and Ukraine, pointing to expanding trade and economic interaction and the importance of tapping fully into the potential of economic cooperation in order to increase the trade turnover even further. The parties also underlined the importance of strengthening tourism and transport ties.

Special attention during the meeting was paid to the European and Euro-Atlantic integration of Georgia and Ukraine, as well as to ensuring stronger bilateral cooperation in this direction. The parties underscored the importance of the cooperation between the two countries within the framework of the Eastern Partnership.

The conversation also touched on Georgia-Ukraine cooperation as part of various international organizations. According to the parties, cooperation within the formats of the UN, OSCE, Council of Europe, and GUAM offers a good opportunity for mutual assistance and support.

Along with the Prime Ministers of the two countries, the participants of the broader-format meeting included Ukraine’s Minister of the Cabinet of Ministers Oleh Nemchinov, Minister of Culture and Information Policy Oleksandr Tkachenko, Prime Minister’s Foreign Relations Advisor Olena Kotlyarova, and Ukraine’s Ambassador Extraordinary and Plenipotentiary to Georgia Igor Dolgov, while the Georgian side was represented by Vice Prime Minister, Foreign Minister David Zalkaliani, Minister of Economy and Sustainable Development Natia Turnava, Minister of Culture, Sport and Youth Affairs Thea Tsulukiani, Head of the Government Administration Ilia Darchiashvili, and Georgia’s Ambassador Extraordinary and Plenipotentiary to Ukraine Teimuraz Sharashenidze.